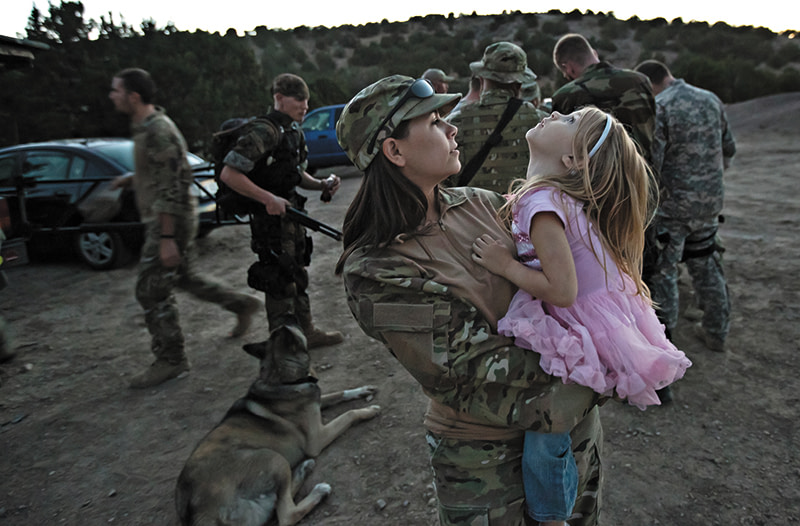 “I consider myself more of a journalist; photography is my medium. I always look for stories. I’m constantly following the news,” says Kim Raff, a photographer who is behind many iconic photos, from the first gay marriages in Utah, to the state’s growing militia movement, to refugees adjusting to life in Twin Falls, Idaho. There is an intimacy in each photo that is unmistakable when glimpsing into the lives that Raff captures, and each portrait—highlighting each subject’s unique personality—is vastly different from the next. “I’m legitimately curious about people and how they live, so it’s not really hard for me to talk to people and explain why I want to spend time with them,” she says. “It’s genuine.” For Raff, the technical side of photography is secondary to what makes a photograph powerful, as she focuses more on capturing the moment as it happens. “You gotta be a blank slate and let them write their stories to you.”

Though Raff studied visual journalism at the Rochester Institute of Technology in Rochester, New York, she attributes her keen eye and intuitive storytelling prowess to her internships and work in the field after graduation. Raff interned in Saginaw, Michigan; Lynchburg, Virginia; and in Salt Lake City at the Deseret News, which later led to a position at The Salt Lake Tribune. After being laid off from the The Salt Lake Tribune, Raff kicked off her career as a freelancer with a project highlighting the United Sentinel Militia in Utah, who were advocating for 2nd Amendment rights in the wake of gun control talks. The photos, while depicting militia members with their impressive arsenal, also show a camo-clad people holding children or laughing together at their meetings. For Raff, the project was never about creating an exposé on the matter but, rather, to let this militia group tell their own story through her photographs. “I think they took a huge leap of faith on me, and I was always really sincere in how I came to them,” she says. “I wasn’t just trying to go out there and get pictures of them with their AR-15s looking crazy. I was interested in why they were doing this and who they were.”

Raff’s strategy of being a “blank slate” for her subjects to write their stories on has paid off, and the evidence is in the depth of her many portraits and candid moments. A portrait for The New York Times of Eddyann Filippini, a Nevada cattle rancher whose livelihood was threatened by the Bureau of Land Management is a portrait of striking and compelling women standing—almost defiantly—in denim jeans and a work shirt off the side of the road in Nevada. “She was beautiful, but you could tell she was a little exhausted. That was part of this whole story,” Raff says. For Raff, gaining the trust of her subjects by being personable while also being the means for them to convey their own story often grants her the access that can be elusive for some photographers. “Access is a huge part of it,” she says. “If you’re not even in the room to make the picture, it doesn’t matter how good of a photographer you are.”

Raff, who now lives in the Glendale neighborhood of Salt Lake City, takes pride in her community. She attributes her success to her resilience, hard work and sincere interest people’s lives and the stories they have to tell. “You gotta put the time into it. You can’t be one foot in—you gotta be full-on,” Raff says, recalling times where she lived frugally in order to pursue photography full-time. Raff’s dedication to her craft has contributed to her growth as a storyteller and a photographer, which she believes are more instinctual than learned and must be honed over years in the field. “It takes so much repetition and so much practice and relentlessly just failing a lot,” she says. When people ask her for the tricks of the trade, she can only attribute it to hard work. “It’s not a magic trick. You just gotta work really hard. You’ve gotta expect to be really poor for a while, and you’ve got to be relentless.”

For Raff, a photograph should be able to transport the viewer into the magic of the moment. “The whole idea is that we’re trying to take people to a place they’ve never been or they can’t go physically for themselves—that can be even emotional, too,” she says. Now, as a freelancer, Raff’s work can be seen in a wide array of news outlets, including Broadly, The Washington Post and The New York Times. For more of Raff’s work, visit kimraff.com.