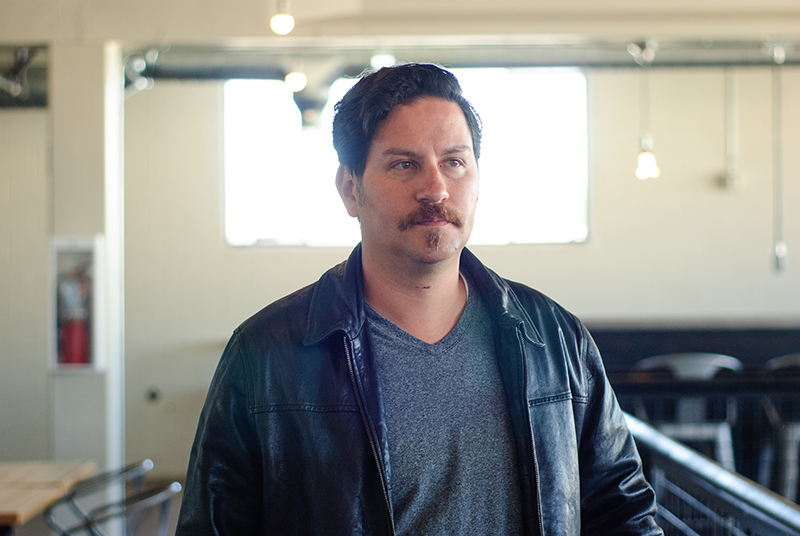 The Distillery, the Witch and the Cocktail: Having a Drink with Sean Neves

Have you ever dropped to your knees in the middle of downtown Salt Lake City, looked up at the steely gray sky and cried, “Why are there no distilleries down here, goddammit?!” I did about once or twice a week until I sat down with Sean Neves, who walked me through the steps that he and his cocktail brethren have taken to make urban spirit production a reality for our local economy. One would think that Neves would be content with being a musician, DJ, real estate agent and award-winning mixologist extraordinaire, but behold, there’s more. In addition to being President of the Utah chapter of the U.S. Bartenders’ Guild and part-owner of the soon-to-open bar Water Witch, Neves has also headed up the effort to change the zoning laws within the city to include distilleries as a real-deal, by-god addition to our city’s ever-burgeoning drinking culture.

The short of it is, in 2012, three of the best progressive cocktail artists in Utah, Neves, bartender of the now-closed Wild Grape Bistro; Matt Pfohl, beverage manager of Pallet; and Scott Gardner, then the mixologist at Finca, were invited by SLC Foodie to teach a class about cocktails and techniques together way up high in the Avenues. As they got acquainted professionally, they realized that they shared common passions and interests in the Salt Lake bartending industry, so they decided to get a drink with each other and spitball ideas. In the spring of 2013, they dropped most of what they were doing and formed the bartending supergroup named Church and State.

Neves says, “We started this thing to run multiple future bars, open a distillery, do booze consulting and education, and also do badass, off-site, gonzo bartending.” The group found themselves unexpectedly busy shaking craft cocktails for corporate clients and friends, ranging from bar and Airbnb events up at Sundance to full-scale, days-long events like SXSW in Austin, Texas. Their next step would be to open a bar, but alas, who knew a no-strings attached business incubator would open Downtown and name itself Church & State in 2014?

“For a while, we joked we were the ‘Artists Formerly Known as Church and State,’” says Neves. Eventually, the mixology trifecta changed the name of their forthcoming bar to Water Witch. “Water Witch” is the name of one of the Great Salt Lake Yacht Club’s finest old crafts, and off they sailed to find a good location and liquor license. Ever aware of the importance of location, Neves employed his real-estate background by scouting dozens of spots, even undergoing contract negotiations for four of them. Finally, the ambitiously energy-efficient and 100-percent locally sourced Central 9th Market project caught wind of this talented partnership, and now, the owners of Water Witch are waiting for the paint to dry at 153 W. 900 S. The doors open later this year, and all the subjects of the Salt Lake fine cocktail world are rejoicing! The end.

Oh wait, there’s more. Rewind to the part of Neves’ mission statement where he spoke about wanting to open a distillery, then rewind even further to a freak barbecue encounter in August 2013 between Neves and then-city councilman Kyle LaMalfa. What started as a quick handshake and conversation led to Neves mentioning his desire to open a distillery in the Downtown area. LaMalfa suggested they set a meeting to sit down in September with two lead city planners to talk about the different aspects and impacts of adding distilleries to the General Commercial (or CG) zone in Salt Lake City. “Mr. Lamalfa sponsored the petition, and it was approved by the Council in November of 2013,” Neves says. Zoning stuff is complicated and boring, but essentially, there are two things to note here: One, it pays off to actually mingle at a barbecue in this small town because maybe a person you meet will steer you in the direction of fulfilling your hopes and dreams by drawing you into the sexy netherworld of Land Use Tables and local politics. Secondly, a change in zoning within the Transit Station Area could potentially mean Salt Lakers hopping on and off TRAX and touring the latest and greatest distillery without having to get behind the wheel. Safety bonus!

A mustachioed gentleman by the name of Derek Kitchen (current Councilman of District 4) was in attendance for the initial meeting. “Derek was kind enough to call for a meeting with planning staff to discuss this issue and to discuss the possibility of adding distilleries to other zones,” says Neves. “I had already been in contact with staff about the TSA [Transit Station Area] changes, but this was our first formal meeting.” Neves went on to explain that “Derek is spearheading some significant, needed changes to the TSA zone, and one of the recommended changes was to enact a land-use table type of zoning, where ‘wanted’ uses are permitted by code rather than ‘unwanted’ uses being disallowed, which is how the code currently reads. I am currently working on distilleries being permitted as a ‘wanted’ use in the TSA zones.”

If the changes are made, this means that Neves, Pfohl and Gardner might not be celebrating just the opening of Water Witch. They aim to open a Downtown distillery called Congregation Spirits. Fingers crossed! The trio has met surprisingly little resistance to the zoning changes from our conservative legislature, and the issue will have been put up to a vote before you read this, so hopefully we’ll have a nice, boozy future to look forward to.