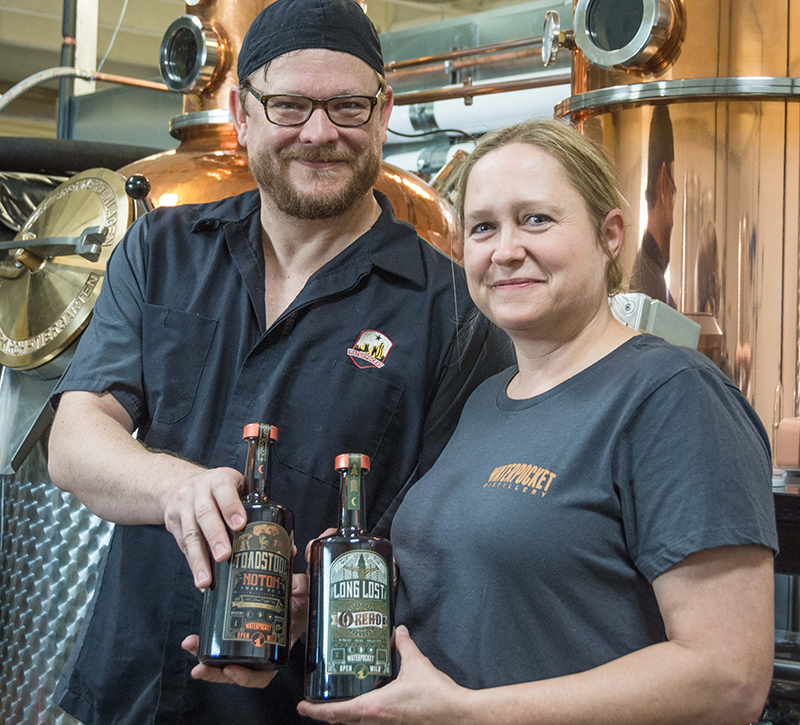 Provocative spirits are being conjured at Waterpocket Distillery. Since the distillery opened this year, their compelling flavors have been used in cocktails served by the coolest bars in Salt Lake City. My curiosity was piqued by the creative cocktails, so I jumped at the chance to meet the owners, Julia and Alan Scott, for a distillery tour and a tasting.

The distillery is small, located in a business park in West Valley—if you blink, you’ll miss it. But once you step into the back room where the magic happens, you’ll be utterly impressed. The first thing you’ll notice is the double-pot still system, custom made from a family-owned business in the Black Forest region of Germany. Nicknamed “Witch” and “Warlock,” the stills are a steampunk fantasy, made from gorgeous brass with various tubes, latches, temperature and pressure gauges. There are rows of old whiskey barrels, and the largest containers of turbinado sugar and Blackstrap molasses you’ll ever see. A tiny lab tucked into the corner is stocked full of botanicals. After smelling the exotic spices and herbs, my appetite was whetted for the unusual and delicious.

Waterpocket’s products are sorted into three categories. House Spirits include Coffee & Rum Liquor and Blanco Rum. Toadstool encompasses the “bitter and beyond range.” The first offering under this brand is Notum, an amaro with flavors of rhubarb, clove, fennel and a bit of peppermint. The Long Lost label is where you’ll find resurrected spirits inspired by the golden age of botanical liquors. “We’ve tried to dig up beautiful old spirits,” says Alan. Oread is the current offering, flavored with star anise, sage, orange peel and galanga.

The tasting was extraordinary. I’m always delighted to talk to people who are passionate about what they do, but the Scotts brought a whole other level of science, history and geography into the mix. And the unique liquor flavors were mind-boggling.

We started with the most straightforward liquor they stock: Robbers Roost Light Whiskey. It’s light and tasty without the usual whiskey bite. Try it neat or on the rocks—it has a smooth vanilla and and caramel finish. Blanco Rum is a sophisticated white rum suited for sipping. The Blackstrap molasses is the strongest flavor I noticed, with coconut and fruit flavors appearing after a minute. This rum made me want to get cozy with blankets and a good book.

The Coffee & Rum is delicious and approachable. I can’t imagine anyone not falling in love with this liquor. The light rum, made with turbinado sugar and Blackstrap molasses, is aged in whiskey barrels for four months before the flavors are added. Cocoa, cinnamon and rose petal mingle with the coffee, a combination of Ethiopia Agaro, Ethiopia Yirgacheffe Wenego and Rwanda Rulindo. There’s not a lot of sugar, so you’re tasting real flavors. “Our philosophy is to pull the sugar back as much as possible,” says Alan. “We start at the bottom and work our way up. Sugar adds and enhances, and we’re fine with that. Beyond that, it begins to obscure and cloud the flavors. It becomes all about the sweetness.” Coffee & Rum is only available only at the distillery, so pick up a few bottles when you visit.

Notom is an amaro, a fancy herbal liquor meant to be enjoyed after dinner to aid digestion (a digestif). The prominent flavors are fennel, clove, peppermint, anise and galanga, which is commonly used in Chinese cooking. There’s a slight bitterness from the rhubarb and gentian. “Notum with a tiny bit of ice is just the thing before I go to bed,” says Alan. The recipe is based on a forgotten Kräuterlikör (herbal liqueur) recipe from the Czech and German frontier. Fun fact—this is the first amaro distilled in Utah! Serve this drink neat and chilled.

“Oread really sorts people out,” says Alan. “It comes down to star anise and the licorice flavor—if that appeals to your palate. It’s distilled like gin but has a completely different flavor profile. It’s an interesting range of flavors.” Oread Botanical Liqueur is named after the nymphs in Greek mythology that haunt the mountains. It tastes as ethereal as it sounds: a heavenly combination of sage, orange peel, cassia, nutmeg, ginger, galanga and star anise. Under the Long Lost brand, this unique botanical liquor embodies what Waterpocket Distillery is all about. “This is an Old World–style botanical liquor in the tradition that we’ve long lost,” says Alan. Julia continues, “We’re really surprised. The reception has been really good. We’ve actually sold more of Oread than anything else that we make.” Alan suggests using Oread as a substitute for gin and to spike margaritas and other cocktails with the botanical liquor. I’ve been mixing Oread with tonic water and a slice of lime—it’s a refreshing change from my usual vodka and gin.

“Open Wild” is Waterpocket Distillery’s motto—it speaks to their spirit of adventure. The distillery and liquors are named after the natural wonders of Capitol Reef and hints at the inspired and unusual craft distilled spirits they’re creating.

Head to waterpocket.co to book a tour and tasting or discover most of their products in Utah liquor stores. Follow their Instagram (@waterpocket_spirits) for a glimpse of the magic behind the scenes and peruse their website journal to read about their journey. There’s more on the horizon for Waterpocket Distillery, and I can’t wait to taste what comes next.