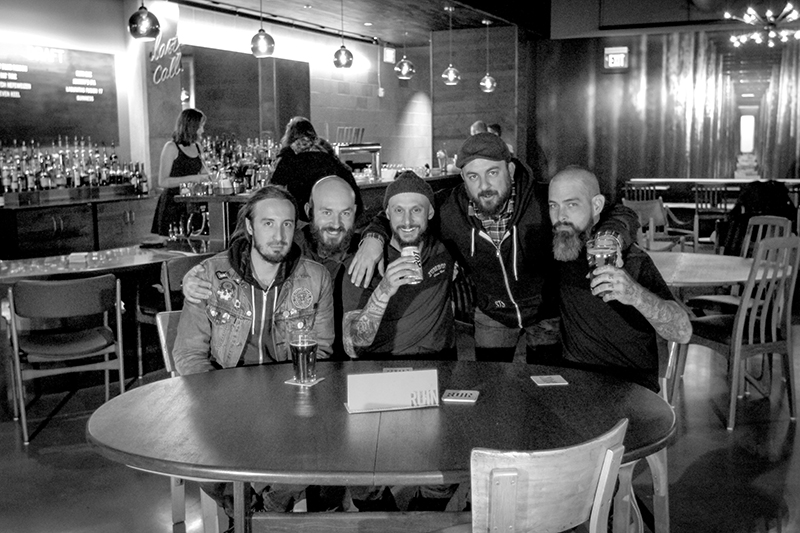 What’s Doin’ at The RUIN

Just outside the hubbub of the recently bustling granite district of Sugar House is a bar that doesn’t care how fast you can chug a beer. There is no flat-screen television broadcasting a football game, no video poker or shuffleboard in the corner. Nachos, for better or worse, cannot be had here. The RUIN—the newest and most refined vision for public drinking—has arrived and resides just east of Highland Drive on Wilmington Avenue.

Aside from the twang of ’50s rock n’ roll playing through the P.A., the atmosphere is a quiet one. “The concept derived from someone’s living room, taking that to the bar scene, so you have the feeling that you’re at somebody’s house more than you’re at a bar,” says McCaleb. But that’s not to say it’s one of those wine-and-cheese, book-club kind of living rooms where the stench of Prozac and divorce lingers in the air. They still serve Pabst by the can, but there is definitely a clear point of departure from, say, Sugar House Pub. “You can’t come in here and get a shot of Fireball,” says Fouad. “I don’t want some guys in here chest-bumping.”

Upon walking through the doors of Sugar House’s newest watering hole, I notice the sheer angles of the stainless-steel bar and the bronze lighting, which makes me think of all manner of dark spirits—whiskey and rum, that is. But the lights aren’t dim to hide puke stains or any other form of drunken blight. Rather, they create harmony between the organic and inorganic—the wood from the tables and chairs contrast with the steel polish of the exposed trusses and ducts overhead to create an overall effect of purpose. “Everything in this bar was custom-made for this bar,” says Saunders. In fact, much of the furniture was built by the proprietors themselves, including the barstools and the two-top tables built into the wall, which offers a sense of being in a library with the desk-lamp lighting.

The Ruin is much less a judgment of bars that provide an atmosphere for hooligan-ery than it is one that seeks an alternative to the typical features of a bar. Absent, too, are the things one might find on the walls of your average roadhouse. “There are so many bars that I go to where I’m assaulted by ads all the time,” says  Saunders. Indeed, the only signage on the walls of The RUIN is a neon last-call sign, the purpose of which is to prevent the bartender from having to yell across the room. Neither are there portraits of buxom ladies nor ‘70s guitar idols.

Everything about this bar reflects the minimalist philosophy that the owners intended. A lot of the furniture is Mid-Century modern. The menu is solid, and the drinks are simple. To cut the time it takes to get a cocktail, bartenders use a limited palette of four or less ingredients. Montrone, RUIN’s General Manager, assures me that taste doesn’t suffer in the equation, saying that all possible ingredients, including all of the juices, are made in house.

The Ruin will be a saving grace for anyone looking for tranquility in the recently developed and dense areas of Sugar House. It will cater to the new apartments as well as young professionals working in the area. “We want to be the place where people come get a drink after work,” says Montrone.

Amid Utah’s changing economic climate will emerge a new generation of competitive business owners in Salt Lake City who realize the necessity of innovation and uniqueness to maintain a successful enterprise. “It’s hard to make something completely different—[Utah bars] all have access to the same type of liquor,” says Fouad, “[but] there are better restaurants here than there were 10 years ago. That should be happening with bars.” You can expect to see businesses similar to RUIN sprouting up around the valley because the owners’ vision doesn’t stop at this one bar. “This is a stepping stone in a bigger picture,” says Kooley.

We are constantly affected by the spaces we inhabit. At the risk of sounding like a jerk, I’ll hazard a guess that this is the theory behind architecture and interior design—to create mood by virtue of space and décor. The RUIN and its atmosphere will instill a mood that is neither smug nor slobbering, blotto nor sober, which is its intention.