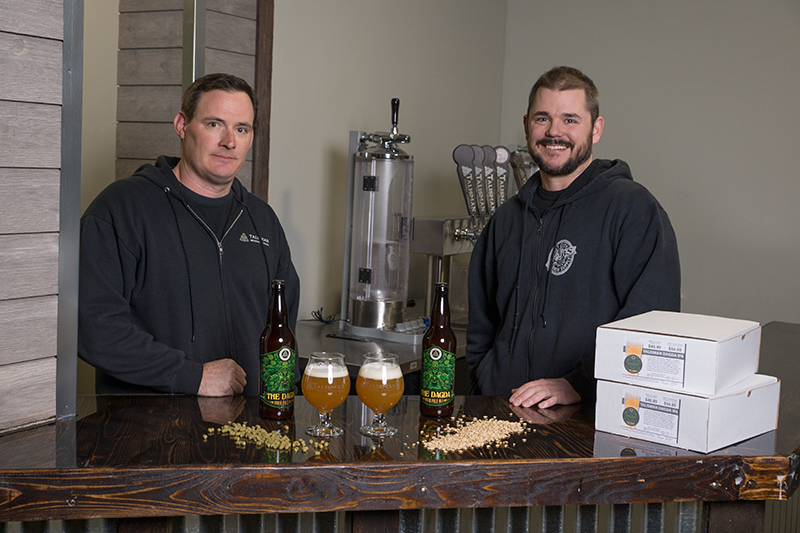 At many home-brew supply stores around the country, “clone recipes”—kits designed for home brewers to recreate their favorite craft beers—are everywhere, especially for brands like Rogue and Russian River. However, the idea had never been applied to a Utah brew—until Ogden City Brew Supply and Talisman Brewing Company teamed up to sell the Dagda IPA recipe for home brewers to recreate back in August. The recipe, selling for about $50 at OCBS and Salt City Brew Supply in Midvale, includes the steeping grains, hops and malt extract, all packaged fresh to make a five-gallon batch. So far, the response has been positive for the kit. As Ogden City Brew Supply Co-owner Ross Metzger says, “[The Dagda IPA kit sells] at the equivalent rate [at Salt City Brew Supply] as our regular IPA, and probably a little bit more so up in Ogden. So, as long as that’s the case and Talisman still wants to do it, we’ll do it.”

The collaboration first came about when Talisman owner and head brewer Dusty Williams provided OCBS with the recipe for Dagda. “Ross, Cody [McKendrick, co-owner of OCBS] and I just began discussing some ways to promote home-brewing and support the community,” says Williams. “I sent over the Dagda recipe in five-gallon scale, and the OCBS dudes did their magic by putting together the kit. Even as a small-batch commercial brewery, we still support the local home-brew shops … so I tend to go to OCBS often.” For Metzger, seeing Talisman start up from a home-brew background was a sign of success for the home-brew community, and working with Talisman seemed to be a no-brainer. “We already had a friendly relationship with them as customers, so it just kind of made sense,” he says. Talisman opened shop in Ogden slightly before SCBS decided to branch out to Ogden as well, so the partnership was mutually beneficial to get the word out to both Talisman’s and OCBS’ respective customer bases in Ogden. Ten-percent-off coupons for the Dagda IPA kit can be found at Talisman Brewing Company, while the kit itself also has a coupon for products at Talisman’s Ogden location.

Both Talisman and OCBS are built on a healthy respect for the art of home-brewing. “Home-brewing is why Talisman started,” says Williams. “Having a passion for brewing and being an avid home brewer is where I came from. Home-brewing is kind of the roots of the craft beer industry. Talisman is very supportive of home-brewers—we have done a lot within the community to show this support.” In the same vein, OCBS and SCBS pride themselves on being available with advice and supplies for home-brewers. Both locations actively support home-brew clubs and put on events, such as a home-brew competition known as Lagerpalooza, which is currently taking submissions and will take place in early May at Bohemian Brewery. For Metzger, the most passionate and successful home brewers are those who truly like to create something new and are open to expanding their palate by visiting local breweries. His advice for those who want to get started in the hobby: “Expand your palate. Like beer,” he says. “That’s all you really need to do. The local home-brew store, we’ll really walk you through every other aspect of it.”

Dagda IPA, named after a Celtic god known as “the good god” who was associated with agriculture, weather and protecting crops, has a flavor profile that Williams describes as “hop-forward” with a “pleasant balance of malty sweetness and hop bitterness. Expect citrus, grapefruit and some tropical fruits followed by slight pine and resin notes. It’s not too over-the-top with a certain flavor profile or bitterness.” As one of Talisman’s signature beers, the Dagda IPA is a popular choice for home-brewers to recreate, and a great introduction to the Talisman brand. Metzger—who believes that most home-brewers, especially those new to the craft, tend to try to recreate beers that they can recognize—claims that Dagda’s well-balanced flavor makes it popular as a clone recipe at OCBS. “It’s a fairly straightforward, West Coast–style IPA,” says Metzger. “There’s something to be said about it being approachable. That’s why it’s a big flagship beer of theirs. It’s just a good, easy-drinking IPA, so it sells well and is approachable to lots of people.”

With the success of the Dagda IPA kit, OCBS and SCBS are beginning to work with 2 Row Brewing in Midvale to create the next kit. Additionally, Talisman Brewing Company is gearing up to open a taproom to showcase their beers, hopefully in the first two weeks of April—find updates on Facebook and Instagram (@talismanbrewingco). Pick up the Dagda IPA kit on saltcitybrewsupply.com, as well as in Ogden at Talisman (1258 Gibson Ave.) and Ogden City Brew Supply (2269 Grant Ave.), and in SLC at Salt City Brew Supply (723 Fort Union Blvd.).