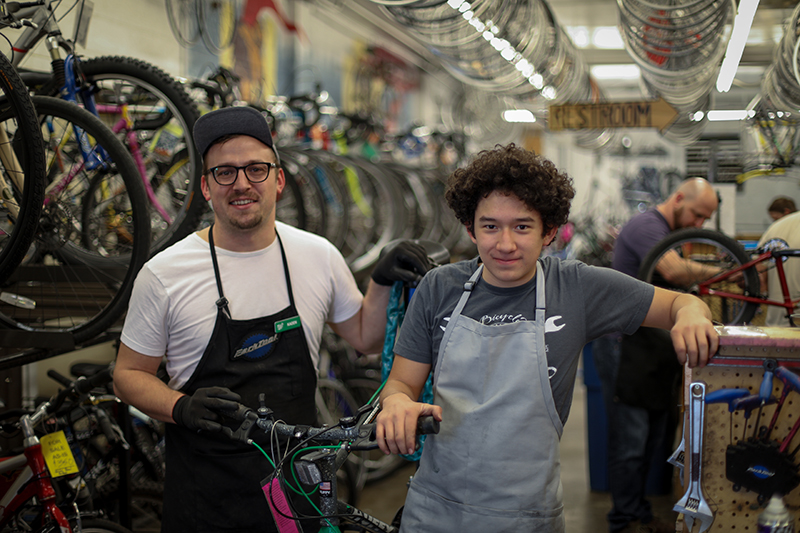 On a warm, spring, Saturday morning, I passed the spirited rusting sign, made entirely from a few-dozen chain rings welded together, which reads “Bicycle Collective.” The propped-open door reveals the mechanical flux of clunks, squeaks, creaks, clicks, ticks and whirs from the inside of the Salt Lake City Bicycle Collective (SLCBC).

The shop buzzes while Education Coordinator Kaden Coil-Pittman and I move two wooden benches into a quieter room packed with miscellaneous tools, bikes, parts and doodles of bike anatomy that range from juvenile to complex, taped on the walls. We move past a line of colored aprons and 30 names written on a large hanging whiteboard, recording the standings of the SLCBC youth bike-education programs—with (almost) 15-year-old Elijah Lowe in the lead.

Coil-Pittman, a former kindergarten teacher, became the SLCBC Education Coordinator after yearning for more community involvement. “I left teaching and found the Bike Collective” about a year ago, he says. He now shares his time between SLCBC and The Road Home, and has spent a great deal of time collaborating with and observing other bike shops’ youth-education programs.

The goal was to grow the programs at SLCBC and get more youth involved, especially those from low-income and refugee populations. SLCBC works with schools around the valley, the Boys & Girls Club and even juvenile offenders and troubled young people. It provides youth with structure, “a sense of building community and the chance to meet different types of people they may not otherwise meet,” Coil-Pittman says.

Students now fill the shop during the dedicated two-hour-long program sessions on Mondays, Wednesdays and Saturdays, but that wasn’t always the case. There was a drop-off of students “around the 12-hour mark, where kids get to take their bike home. We would never see them again,” Coil-Pittman says. “So, we revamped our education programs with this martial arts approach, where you start at a green apron and work your way up to a black apron,” to encourage and reward further progression.

The aprons are clear visual indicators of achieving new levels of expertise and hours spent in the shop. From being able to patch a tube, change a tire and lube a chain, students will eventually be able to change pedals; adjust derailleurs; replace chains, cables and a cassette; grease a hub; and more. There are six different hourly milestones, ranging from eight to 100 hours in the shop. In order to receive their new-colored apron and the corresponding award—like a tool bag, multi-tool set, chainbreaker set or hand pump—students must successfully demonstrate the necessary skills via paper testing and teaching others who are less seasoned.

While the black apron is the ultimate end goal, after 30 hours in the shop, the kids can choose between a red or purple apron. “Red is a pure mentorship. Essentially, it’s an extra hand in the shop,” Coil-Pittman says. “The purple apron is the junior bike mechanic path. It’s a separate, more advanced course, where at the end, you get a certificate you can take to a bike shop and get a job.” This is the path Lowe is taking.

Lowe initially progressed through the free youth–mountain biking program, where he developed a love for biking and the dream of having his own mountain bike. New bikes are incredibly expensive, something the Lowe family couldn’t afford. A family friend recommend SLCBC, where Lowe could work toward getting a bike through the bike shop. “I didn’t like it at first,” says Lowe, who now has a bike he built himself and between 45–60 hours in the junior bike mechanic program. “Now, whenever I can come, I come. It was interesting to learn about bike parts, their names, where they went, and how they work together.”

Bikes are complicated, but it’s not complicated to see why Lowe enjoys mechanics. “I just like working with my hands,” he says. He once fixed his chain when it came off while biking to school. “I just fixed it,” he says. “It was cool to do it myself and not have to walk it back home.” Fixing your bike is one thing, but building your own bike is another. “You value the bike you made more because you put your time into it,” Lowe says. “You didn’t just get it from a store, where you didn’t have to do anything to it and it came ready to ride.” Instead, people like Lowe give it some TLC in the shop.

Lowe cares not only for his bike but for other kids, too. He’ll help with anything, but “I don’t do [a fix] for them,” says Lowe. “I tell them how to do it and see if they can get it right. If they don’t, then I’ll actually show them.” Despite never thinking bike mechanics would be his first job, Lowe is excitedly waiting until next year when he turns 16 to get a job as a bike mechanic—hopefully at SLCBC.

Lowe and Coil-Pittman drift back into the shop for kill-bike day, where they “kill” nonfunctioning bikes and salvage working parts. Bikes and parts are imperative for SLCBC’s bike-recycling business model to ensure affordable access to bikes and bike education to all. From volunteering your time to donating old or unused bikes, “it’s amazing how little you have to do to help these kids,” Coil-Pittman says. To determine how to get involved and support SLCBC, visit their website at bicyclecollective.org today.