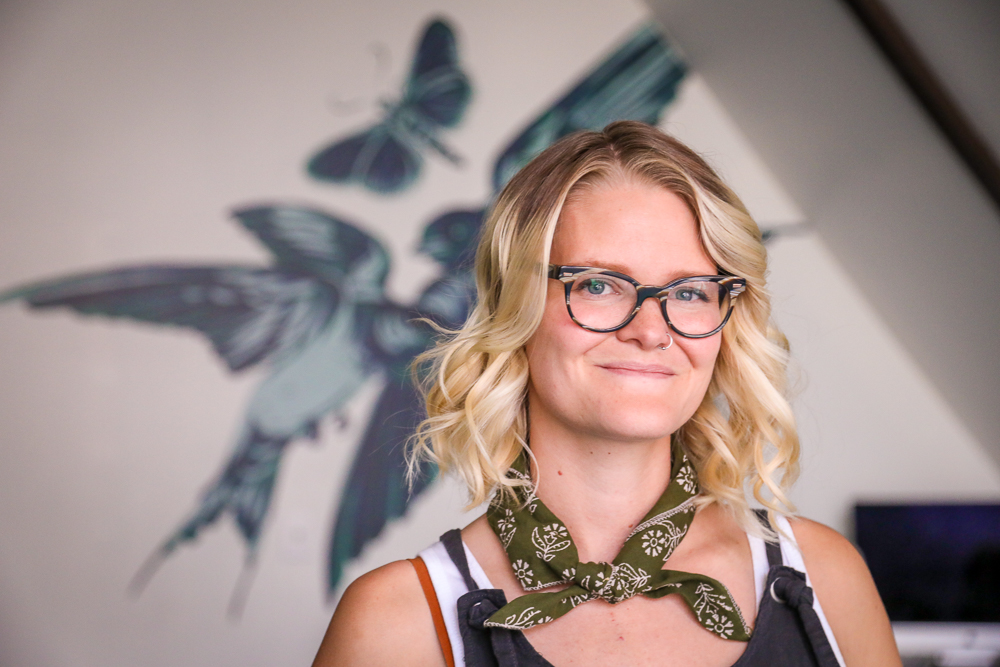 Jill Went Up the Hill to Draw Nature

Jill De Haan and I drank coffee together as she reflected on childhood days spent running through her grandparents’ towering garden and traipsing around the mountainside of South Ogden. “I was always outside, so that nature aspect shows up a lot in my work,” says De Haan, a local lettering artist and illustrator who—from her art to her heart—radiates timeless beauty, curiosity and appreciation for the world. De Haan also draws inspiration from handmade goods and all things vintage. Whether referencing floral tins and heirlooms from her grandma Dora’s house or funky-patterned clothing from consignment stores, she weaves old-fashioned textures and colors into her work.

In the world of typography, lettering is a dot on the globe. “Typography is the big family, calligraphy is writing, and lettering is hand-drawing all of the letters,” says De Haan. She always wanted to do more than “pretty writing,” like calligraphy. Instead she naturally gravitates toward lettering and illustration because it allows her construct words in such a way that tells a story or relays a message with illustrative flare. She has evolved from a creative childhood drawer to a designer, illustrator and muralist, tackling projects. She tackles small and large projects both inside and outside.

Her career began at around 10 years old one night before a dentist appointment. “I drew ‘don’t eat,’ made out of food,” says De Haan. As a lifelong visually and artistically oriented person, she pursued an associate’s degree in visual art and design at Salt Lake Community College. The program was primarily rooted in graphic design, but she realized that she could “take letters to some place new, and they didn’t just have to be a font,” says De Haan. Under the watchful eye of associate professor Kerry Gonzalez—her “design mother,”—she was exposed to stern design methodology while also being encouraged experiment and push the boundaries of art and design (essentially, learning the rules first then when and how to break them).

De Haan landed her first job at American Crafts, a local scrapbooking store. She designed paper, patterns, stickers and all kinds of embellishments. In the same stage of life, De Haan began freelancing. At first through word of mouth and then through her established presence on Behance—a digital-portfolio website for creative professionals. She soon landed her dream job at a local creative agency, Struck, where she further explored illustration and lettering for clients like Nickelodeon.

Upon the arrival of her son Judah, De Haan began a full-time freelance career from home, passing her occupation to her husband, who filled her position at Struck. Represented by Snyder New York, she now works on projects designing calendars and greeting cards for Papyrus, book covers for Penguin Random House and for magazines like Southern Living and American Girl. She has tackles logo redesigns and paints large murals for big-name businesses like LuluLemon, and commercial design work for companies like Adobe, Coca-Cola and Johnsonville Sausages. “My heart, though, is in these really illustrate-y kind of things,” says De Haan.

At first, she mostly designed vector-based illustrations using programs like Adobe Illustrator and Photoshop. “I slowly started playing around with textures, trying new things like drawing by hand, scanning them in, then having fun with it,” says De Haan. “Now I try to do everything by hand and scan it in, but I do still have the skill to vectorize type if I need to.” Despite designing in a technology-driven world, her first drafts are still drawn on paper—or even a napkin.

While De Haan says, “Thank heavens for the iPad,” technology is just a helper in a multi-step process. She must still select the right paints and sheens for indoor and outdoor use. She even faces challenges like how to paint outside during rainy season, on different surfaces like brick or wood, and how to calculate the time needed to complete onsite, large-scale, out-of-state projects.

De Haan balances big-brand work with involvement in the local design community, from friend-making to contest-entering. Each year, she submits her work to the SLC American Institute of Graphic Arts’ (AIGA’s) 100 Show—the region’s most prestigious juried design competition. Out of all the submissions, 100 pieces are displayed at the show, and 10 of the 100 are awarded a renowned prize: The Copper Ingot. “I’ve always gotten into the 100, but I won a Copper Ingot this last round!” she says with a smile.

Her Copper Ingot winner was a poster she designed for Artists for Education, an organization that hires illustrators and letterers to design educational artwork for schools and classrooms. The poster says “Let Nature Be Your Teacher,” and the words are made out of nature-y stuff,” De Haan says. “I know it’s successful because it hangs in my house now, and Judah sees something new every time he looks at it.”

De Haan continues to notice new things about herself, the world and how to keep up in an industry where “social media has changed everything,” she says. “Back in the day, something would stay in style for 10 years. Now, it’s close to a month, so you to have to evolve quickly these days.” She has an aptitude for playful and artistic learning—an undeniable fuel for growth and evolution. She recently painted a full-landscape mural in her home of Utah flora and fauna, and is embarking on a new season of scientific exploration. “I feel like I’m turning a new leaf and becoming what I really want to be,” says De Haan. “As I learn new things, I’m going to do an art project about it,” she says. “Before, I just wanted things to be pretty. Now I want you to learn something from it.”

She’s currently pursuing personal projects involving woodworking projects, nature-inspired children’s books and illustrating the words Paleozoic, Mesozoic and Cenozoic on pieces of wood. The “fonts” and letters will reflect the time periods. “For example, Paleozoic was the earliest time period, so that will be all blue and underwater, alien-looking stuff,” says De Haan. “The Mesozoic will be greens with dinosaurs.”

While she dives deeper into projects like illustrating “symbiosis” and “pollinators,” featuring uncommon pollinators like geckos and monkeys, she continues to echo the memories of her childhood with her son. She is now surrounded by a flourishing garden of her own and a home filled with her own art and Grandma Dora’s antiques. De Haan doodles her way into a new chapter in life, continually re-exploring the world with an old soul and set of wondrous eyes. You can follow her journey on Instagram @Jill_dehaan or on her website at jilldehaan.com.