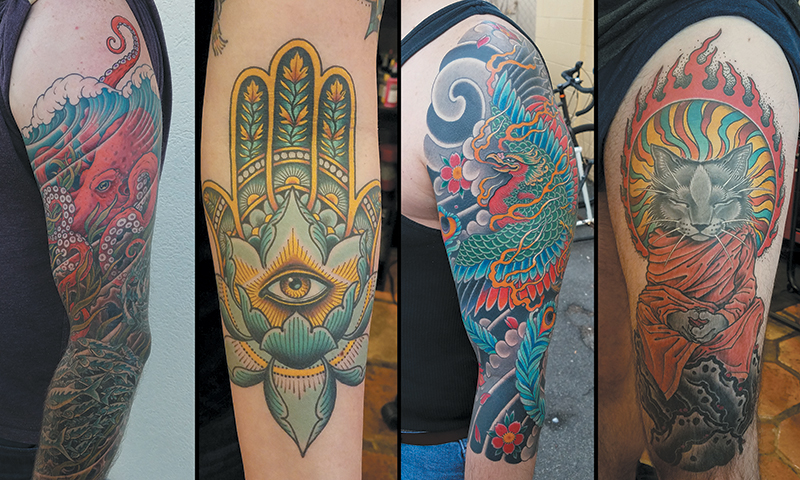 Salt Lake City has fostered a steadfast tattooing scene for a couple decades now. It seems like no matter where you go within the city limits or beyond, there is an established shop to be found with committed, knowledgable, skilled and wise people on the tattoo machine. So you may have time to plan your next custom piece or esoteric flash once the heat dies down, SLUG has compiled images of tattooers’ work and their thoughts on their craft. Since it’s impossible to include everyone involved in local tattooing in one issue of SLUG, we’re mixing it up with a range of tattooers from different shops with a range of professional backgrounds, experience, etc. to depict a segment of the current local-tattooing mosaic of SLC/Utah.

Years tattooing: Got my apprenticeship early summer 2010, so about eight years.

Where you apprenticed and for how long: I apprenticed with Ryan "Catfish" Sager and his late brother Eric Sager (rest in peace, boss) at Ironclad Electric Tattooing when it was still owned by them. That took about two years, and I've been tattooing full-time since 2012, back when the world was supposed to end.

What styles of tattooing you favor/specialize in: Naturalistic or botanical illustration,  blackwork and Japanese-inspired styles always appeal. 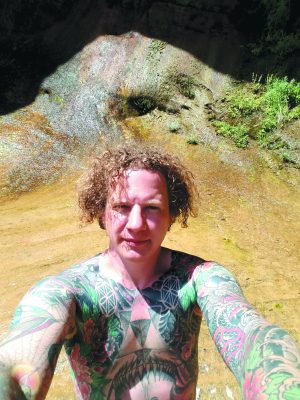 Favorite subject matter: Birds, flowers, bugs, dragons, cats, ladies, ornament, whatever … it's your world; I just try to make it look cool, whatever it is.

Favorite flash: I love flash, though I've never tattooed a lot from it—most of what I do ends up being custom requests—so I'd have to say my favorite flash to tattoo is from our annual fundraiser for Headstart, which is always a blast. Those designs come from pretty much everybody who's worked at Heart of Gold over the years.

Favorite custom piece you’ve done: A wizard lighting a bong with his finger while riding a lightning-breathing dragon—for a friend from long ago who doesn't even smoke weed. I think I peaked there and have been steadily coasting since. (*sarcasm)

Tattooer you admire: I admire the ones I know personally the most, to be honest, as I know them the best. On a broader scale, for paving the road that led to here, I think it's difficult to overstate the impact of Horiyoshi III and Ed Hardy on the tattoo world.

Other visual art you make: I roll a really nice cigarette. If you know, you know. It's probably my crowning achievement.

Tattooing guilty pleasure: I love the smell of my gray-wash.

Best tattooing tunes to play in the shop: I've been tattooed listening to Junior Kimbrough more than anything else and I wouldn't have it any other way.

Shoutouts: Gotta shout-out Anthony Pagano for doing my bodysuit and for all the magic doors it's opened. If you're interested in Japanese-style work, he's easily my No. 1 in this state.