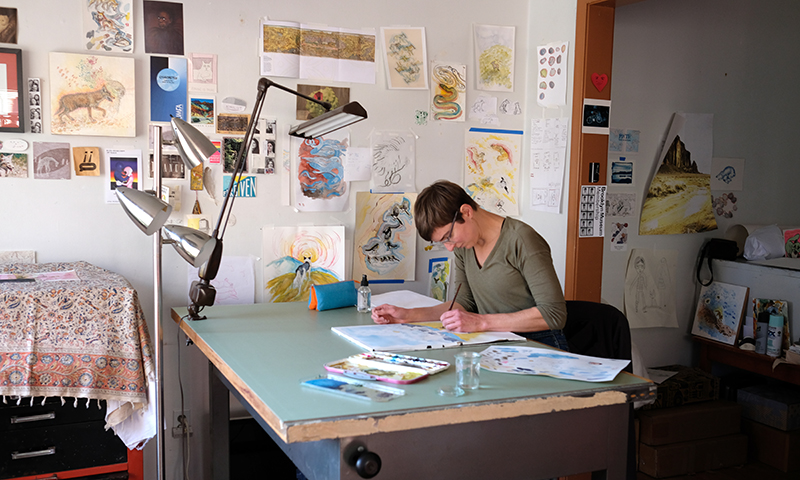 Claire Taylor breathlessly describes her relationship with animals, such as a time when she befriended a once frightening snake and how she sees creativity as a sort of ecosystem. She then stops and bends over to peer at something. It’s a beetle, brilliantly red-orange against the muddy trail—Taylor admires the color and makes a mental note about the meeting. Observing and communing with the world around her in this way is reflected in Taylor’s bookmaking craft, which includes bookbinding, linocut prints and broadsides.

Having spent a decade in the Book Arts Program and Red Butte Press at the University of Utah as both a student and a teacher, Taylor’s career in the department began at a young age. As a Utah Sterling Scholar for art, Taylor had the opportunity to take a bookbinding class, which ultimately led her to choose printmaking as her degree emphasis. The program is home to a studio that allowed Taylor to learn creative techniques such as book-plating, after which she stylized the cover of this month’s SLUG. Book-plates, commonly used throughout the 20th century, are small, decorative labels pasted into books.

Creative nonfiction, illustration and biology all come together in Taylor’s book art.

Though she left the program to pursue a graduate degree in environmental humanities, Taylor has remained involved by volunteering and teaching classes. She used the program’s presses to create a recent linocut series, Sky Snakes. The swirly, blue depictions evoke a literary feel—the texture and hue of the paper allows the story of the serpents to soar off of the page. This artistic surrealism has the imaginative quality of a fantasy novel or a children’s fairytale, particularly when paired with Taylor’s journal-style writing therein.

As a book artist, Taylor combines “creative nonfiction, illustration and biology” as she examines the intersections between humans and the microcosms we interact with. She says, “My artistic process involves asking myself questions regarding the implications of the encounters I have with wildlife and natural landscapes, and investigating the impressions that remain with me following these encounters.”

In 2016, Taylor had an exhibit titled The Inhabitants of the Salt Lake City Cemetery at the Marmalade City Library, which was centered around an essay she wrote and hand-bound into a book. The pieces included in the book were displayed to create a visual map of local literary areas frequented by Taylor. Colorful depictions of baby owls and foxes were accompanied by creative nonfiction that describes dancing in the dark. She writes, “Standing under the yellow, orange, and pink clouds of the sunset is when I feel as though I, too, can be magical.”

“My artistic process involves asking myself questions regarding the implications of the encounters I have with wildlife and natural landscapes, and investigating the impressions that remain with me following these encounters.”

“I view my solo-art exhibitions as a narrative venture for the viewer—almost that the exhibit itself is a book,” Taylor says. “All of the work and writing within one of my exhibits are meant to feed into that feeling.” In her 2019 residency at the Utah Museum of Contemporary Art, called Transcendence by Observation, Taylor incorporated a small field guide book for viewers to reference in tandem with her paintings. This “book-within-a-book” bridges Taylor’s visual artwork with a broader, conceptual consideration of her art as a literary experience.

Taylor often enjoys working en plein air in City Creek Canyon and describes coming across a cactus—something not typical to the landscape. She notes its “sweet yellow flowers, a wasp nest in the works at the base of the plant, and some gnarly aphids.” She returned to the scene with a large canvas from her kit, arranged it on the earth and used watercolor to document the plant. She writes, “A proper mini-ecosystem amusement park. Felt like love radiating from the cactus and the wasp nest. I’ve said it before and I’ll say it again: love the love in my outdoor environment and the creatures therein.” This piece was also featured in the Transcendence by Observation collection.

Much of Taylor’s work could be described—to borrow a literary term—as magical realism. In a 2017 artist book she created, entitled Now I Shed Some Skin, Taylor describes an experience she had with a snake in Red Butte Canyon, in which she felt she could hear its heartbeat. The book is serpent-shaped and warm-toned in color, emoting a feeling that is decidedly not cold and scaly. Taylor’s art uses a firsthand narrative to challenge the perceived differences between human and animal.

“I’ve said it before and I’ll say it again: love the love in my outdoor environment and the creatures therein.”

For the past year or so, Taylor’s position in the book-arts world has shifted to illustration. She recently created desert-themed cover art and accompanying illustrations for Torrey House Press author Craig Childs. To commemorate the 50th anniversary of the publication of Edward Abbey’s Desert Solitaire: A Season in the Wilderness, Taylor’s illustrations and design for broadsides were featured by Ken Sanders Rare Books and Back of Beyond Books in Moab. These depictions are an homage to Southern Utah, with red-rock canyons, ravens and a crisp-blue sky. Taylor feels honored to work with authors who share her desire to reflect upon the supremely special landscapes of the Beehive State.

Taylor’s collections and series are well-documented on her website, clairetaylor.art, and on her Instagram account (@clairetaylor.art). She frequently teaches workshops, including the recent Craft Lake City–curated Handbound Softcover Journals with Watercolor this past November at the Natural History Museum of Utah. Taylor has an artist book featured in Statewide Annual: Mixed Media & Words on Paper Exhibit at the Rio Gallery through Jan. 10. An author reading of the book Taylor illustrated for Childs, Virga & Bone, will be held at Ken Sanders Rare Books on Jan. 9, 2020.