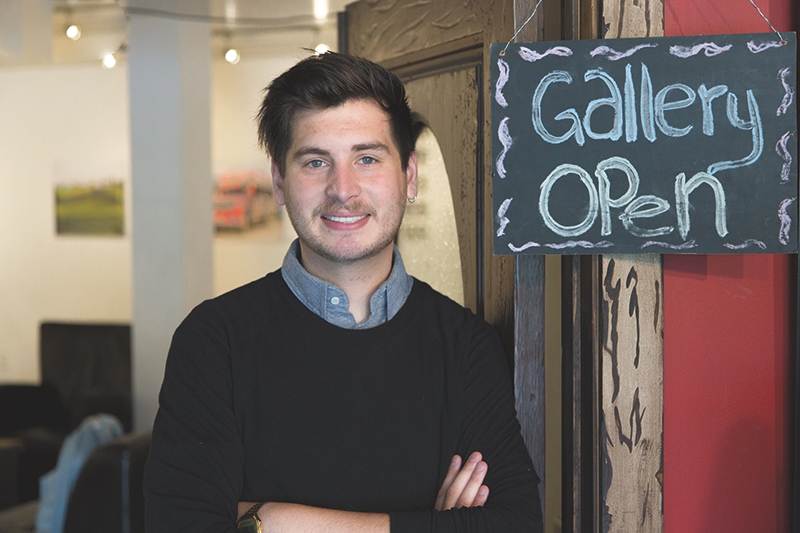 “I’m really interested in images—how visual culture is produced, rather than just fine art,” says Renato Olmedo-González, Director and Gallery Curator for Mestizo Institute of Culture and Arts (MICA), a 501(c)(3) nonprofit. A December 2013 graduate from the University of Utah in Art History and Latin American Studies, Olmedo-González gravitates toward self-portraiture in fine art. He acknowledges, furthermore, that more pedestrian (nonart) forms of self-portraiture permeate our psyches as digital simulacra via Instagram, Facebook and Twitter. Selfies have become a ubiquitous element of digital culture that may often read as commonplace visual journaling, but Olmedo-González finds a deeper question in their presence: “Artists have been pretty much the only people that have been able to create an image of themselves, up to this point. Now, with the availability of cameras and phones and smartphones and everything, it’s everybody that’s doing that,” he says. “So, my question is: How are artists working with self-portraiture, keeping that relevant and interesting in today’s time, in the age of the selfie?” Olmedo-González has expanded this thesis as of Sept. 2 with a show at the MICA-run Mestizo Gallery within the associated (for-profit) Mestizo Coffeehouse, entitled SELF_Created: Identity Today.

Although the selfie phenomenon was one force that impelled Olmedo-González to curate this show, SELF_Created will not include any selfies. Rather, he aims “to show a group of artists that work with self-portraiture within their [medium and the] theme and how their ideas reflect bigger concepts in society, [which] goes back [to] their own identity as artists and their own identity as individuals,” Olmedo-González says. He considers the selfie to be “very ‘now,’” but because of its hyperconsumable nature, it evanesces as we scroll through our apps’ interfaces. “Artists don’t do that. They create an image, and that image stays,” he says. Olmedo-González clarifies that he doesn’t aim to demonize selfies with this show, but to pronounce fine-art self-portraiture and to extract the cultural syntheses of each artist’s individual backgrounds. Using these images, he encourages viewers to complicate the cultural issues that come to the fore through this art. He says, “For me, a picture asks more questions rather than provide answers. It visualizes how complex it is or how complex those problems may be.”

In this light, SELF_Created features four pieces from four artists who offer diverse cultural identities that they deconstruct with their work—Chicana/o, queerness, femininity, masculinity, beauty and more. Olmedo-González will show the work of former SLC resident and gender performance artist Willard Cron. According to Olmedo-González, before Cron began performing, he made photographs, whereas many now know him as a performance artist. Despite this technical distinction, Olmedo-González feels that Cron maintains these seemingly separate artistic identities as two synergistic sides of a whole. “I always view performance art as very self-reflective ’cause you have to look at that person,” he says. Cron’s current repertoire often features himself playing with gender identity with zany presentations therein—perhaps an act of performative self-portraiture. One piece in the show (a series of six photos) embeds Cron’s performance art as he “dresses up in funny costumes, skin tones, changes the color of his face [and wears] makeup,” says Olmedo-González; one press-release photo shows Cron wearing a feminine, curly, purple-and-pink wig with bangs. Identifying as queer, Olmedo-González wanted to include the counter-normative sexual-identity “conversation that’s already happening in Salt Lake through the work of Willard,” à la the Bad Kids, he says. The Bad Kids are a local gender performance-art collective with whom Cron used to perform. “So, people will go to the gallery—and even though he doesn’t live here anymore—they associate that kind of look [and] aesthetic … with the Bad Kids.”
Olmedo-González is from Guadalajara, México. It follows that he would include the conversation of mexicanismo and Latinidad in this show at Mestizo Gallery, but, as he has set out to realize with SELF_Created, he complicates these identities with the work of Alex Moya. “His work deals with themes of masculinity and what’s expected out of him being a man, being a Mexican man, being a Latino boy, being someone that’s a queer person of color,” Olmedo-González says. Note the final identity, “a queer person of color.” Olmedo-González says, “That’s what his work brings into the show, the narrative that Willard doesn’t really work on.” Moya, whom Olmedo-González asserts is active in both the local Latino and LGBTQ communities, will show a video-performance piece, two photo pieces and one participatory piece. In one photo in the video piece, he wears cut-up magazine scraps on his face to comment on voguing—his press-release teaser features an image of a disassembled Chanel-ad mask smattered over his face with one eye and most of his nose poking out. Other than having a Latino/Mexican lens, Olmedo-González enjoys Moya’s art because “his work is very personal but also really funny, which I like: that humor aspect that he includes, or that ‘ridiculous’ aspect that he includes,” he says. Olmedo-González appreciates Moya’s images’ profuse color within “image after image. It’s kinda like those videos that you find on the Internet that [are] just attacking you with all these images.”

A more stark out-of-towner who will show in SELF_Created is Mari Hernandez from San Antonio, Texas. She is a cofounder of Chicana-feminist arts collective Más Rudas in San Antonio, whose collective artists’ statement on masrudas.com adamantly “challenges the view of women as subordinate, passive, inferior, dainty, and polite” on a bicultural plane. Olmedo-González appreciates her ardent act of identification: “Her Chicana-feminist lens, it’s something that I identity with: that whole aesthetic, that theory, that way of looking at things—self-identifying,” he says. “You take in politics that come with your identity. That’s something [where] I personally see myself in her work, even though I’m from Mexico and I’m not Chicano at all.” Hernandez makes photos as well, and one image of hers that Olmedo-González has incorporated into the show is of Hernandez performing herself as Julia Pastrana, a bearded lady. It’s another complication of gender, but as opposed to Cron’s brand of androgyny, Hernandez effectively conflates femininity with the rough contour of the “Rudas” namesake (which roughly translates to “tough”). Wearing a beard and corset, and brandishing arm tattoos, Hernandez calls traditional paradigms of femininity into question with this image.

Enter Ali Mitchell, a 20-year-old BFA candidate at the University of Utah who paints. Olmedo-González first encountered her work at the juried end-of-year BFA show at the U at the end of spring semester 2014. Upon seeing one of her paintings called Sometimes When I Look in the Mirror, which won Runner-Up to Best in Show and the Faculty Choice Award, he was immediately drawn to the piece and bought it. What would be a normal self-portrait painting of a young white woman croaks with automutilation, as horrendous reddish-brown tones mar Mitchell’s face in scar-like textures of paint. “She disrupts her own idea of beauty, what that means for her. It’s something very personal, but I feel like that speaks to a wider audience,” Olmedo-González says. “If she’s looking at herself in such creepy, negative, not-beautiful ways, for me, it just talks about, ‘How am I looking myself?’” In addition to this piece, Mitchell will also present two other paintings and a site-specific piece, which explore similar concepts.

Olmedo-González handpicked each artist for this show based on their preexisting work—no jury or submissions were involved. “All of them, in my opinion, are emerging or establishing themselves in the art community and the art world and their practice,” he says. He views SELF_Created as his first “own creative project” after becoming the MICA Director and Gallery Curator this past February, whereas previous curations had been “packaged” for him by an advisor or other director. “I was very interested in this show because it’s a personal project,” he says. “It’s always been in my mind, and I’ve always been really curious about the construction of a self-portrait on today’s terms in contemporary art—especially with young artists, ’cause all these artists are under the age of 30.” Olmedo-González fervently considers young artists (and himself) to be severely underrepresented. The essence of a show that reacts to the selfie is necessarily in dialogue with millennials, the single parents of selfies: “We’re defining our conversation in very important ways, and a lot of times, specifically within the art communities, [it’s] old people,” says Olmedo-González. Nothing against elder generations, but to have young artists show in SELF_Created falls in line with MICA’s mission statement, which “seeks to give underrepresented artists and communities in Salt Lake City a voice.” What’s more is the full extent to which these themes pervade the metacuratorial elements of the show—“I see myself as underrepresented,” says Olmedo-González. “I’m a curator from Mexico.” Mestizo Gallery itself is the farthest-most outlier on the SLC Gallery Stroll map in that it’s situated beyond both the north-south and east-west axes of its grid.
Another component of their mission statement indicates that MICA “strives to enrich community through art and civic engagement.” Indeed, the aforementioned topics found in the artists’ work fester with subthemes that paint a backdrop of our community’s collective unconscious. In the realm of self-identity, SELF_Created’s issues interweave in a manner that shines light on the diversity of SLC residents’ histories, which I feel healthily complicates our city’s unary melodrama with its Mormon history. “It’s activist in the way that it’s trying to open up a pretty complex conversation,” Olmedo-González says. “It’s trying to call to action to a very complex issue that ‘this artist’ specifically is dealing with.” Olmedo-González, however, wishes to eschew the homogeny of “blanket term” identification in the art that he shows, noting that terms like “Mexican art” or “feminist art” can unduly predicate art to look a certain way. He says, “I want to broaden that definition of what should be showing.” Instead, he indicates that the art in SELF_Created elicits conversation with these identities. He cites Hernandez as an example of someone fully aware of the historical and political implications of the word “Chicana,” who identifies with that term nonetheless in order to propel the dialectic of that conversation.
With the “Mestizo” namesake, Olmedo-González has embraced MICA’s recently expanded sense of underrepresented people. He says, “What you’re gonna get is those ideas of hybridity that exist within our culture, within our community—whether it’s Mexican, whether it’s Chicana, or whether it’s a white girl or whether it’s Willard being a white male,” through the lens of a Mexican-, queer- and mestizo-identified curator, no less. Olmedo-González heralds Mestizo Gallery/Coffeehouse as a veritable community space where young people study and underrepresented groups meet over beverages. The binary works well in the way of foot traffic—art and coffee may be consumed from 6 a.m. to 10 p.m., which caters to students. SELF_Created: Identity Today opened Sept. 2 and closes Oct. 17. The Opening Reception will take place on Friday, Sept. 19 from 6–9 p.m., and Artists and Curator in Conversation featuring Olmedo-González, Mitchell and Moya happens on Tuesday, Sept. 30 from 7–9 p.m.
Photos: