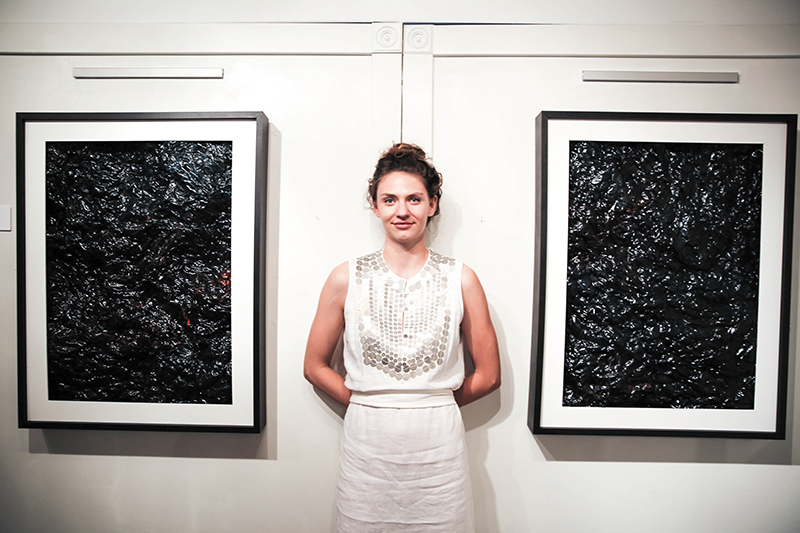 One of the most beautiful things about Earth is that we cannot comprehend its scope. To us, it exists us for several decades at the most, but its own life extends well beyond what we can understand. Occasionally we stumble on what it might feel like to comprehend such a scale—take off in a plane and you see cars, people and whole cities collapse into caricatures of the epic revelations they once were.

Maybe this inability to comprehend is central to why we pollute our home, constantly leaving indelible stains on Earth’s ecosystem. It’s in this light that Ali Mitchell’s Oil Fields exhibition at Mestizo Coffeehouse explores pollution through striking watercolors and oily sculptures, inviting a dialogue about ecology by offering concrete expressions to the abstract notion of a polluted Earth.

Her first solo exhibition and the result of years of studying cultural land use, Oil Fields is nine pieces, each of which offer a tether to the reality of our ecological turmoil and toxic footprint. Some pieces are more literal, such as satellite imagery of oil refineries and lakes turned black from pollution, while others are entrancing expressions of violence against nature. Bp, a large water color piece that has hung at Kimball Art Center, where Mitchell now teaches, depicts the Deepwater Horizon oil spill (the infamous 2010 oil spill by BP) by letting red paint flow down the canvas, simulating a contaminant in water. “It’s meant to get that feel of watercolor,” Mitchell says. “A lot of the decisions I made in this exhibition were about letting the paint flow.” Amazon follows similarly, a black and blue painting with a white strand of river contrasting from one end to another. Like Bp, it’s based off a satellite image, a view from space.

Of the pieces exhibited, the Oil Fields Tryptic 1, 2 and 3 are the most enthralling, and they’re the pieces she’s asked about most often. “I honestly like that,” she says. “[The pieces] are so mysterious—it makes you want to touch them.” The pieces are made of burnt plastic, sculpted thick to look like the surface of oil rippling on itself. Mitchell took several months to figure the process of making the plastic pucker and appear like bubbles (she only finalized her process a week before the opening exhibition in September). The dark black plastic is painted red, orange and blue using acrylic and oil together, a technical no-no. “They interact in a way that destroys the acrylic,” she explains. “The oil eats through it.” It’s a captivating but ironically somewhat unsustainable piece of art. “I don’t really know what will happen with their surfaces over time,” she laughs.

Mitchell spent five years researching art history at the University of Utah. Much of her early artwork and research explored the Earth and its landscape conceptually, such as in A Hundred Years of the Valley, a vast collage of film stills of the Salt Lake Valley. Looking back, “those pieces were all about time,” she says. This exhibition marks a tonal shift for her work toward the fun, crazy and sexy. “I was trying very hard to fit into the research world before,” she says. Where her work now was once more journalistic, these pieces are purposely combining affect with real-world source material.

And that’s the beginning of the knot that Oil Fields very purposefully tangles itself in. How do you make people feel for the environment through art? “It’s the most harrowing question to me, you know. It’s the kind of stuff that keeps me up at night. How do you make this a valuable thing to people?” On its opening night in September, Sam Tresco from Salt Lake Design Collective (SLDC) and Olivia Juarez from Southern Utah Wilderness Alliance (SUWA) both attended the opening to offer those interested in a look at the tangible steps toward sustainability our community is capable of taking. Since September, the two organizations have partnered to harness audience engagement with Oil Fields, such as holding sustainability panels and artist talks. “I surrounded the exhibition with people who offer solutions,” says Mitchell. “It’s a problem we know how to solve, so why are we not solving it?”

Oil Fields affirms Mitchell’s value to this particular conversation by showing art’s power to ground the abstract. “How do I make something that can make someone feel something right now?” she asks. “If someone hates it, wants to take it off the wall, they’ll be talking about it!” Each piece arrests you to the ecological violence from which it’s built: the clear, distinct mark-making in Amazon, the bloody acid coursing down Bp, the way oil and acrylic clash and glimmer in pustules in the tryptic—violence is in the form.

One piece feels out of place in this regard: Pale Blue Dot, a photo of Earth itself. “I know it’s simple,” Mitchell tells me as we stand looking at it. “Maybe it doesn’t fit in particularly well with everything, but to me …” She pauses as she extends a hand toward the tiny Earth in front of us. “It’s the most beautiful image.” Oil Fields is on display at Mestizo Coffeehouse on 631 W. and North Temple through December 2.