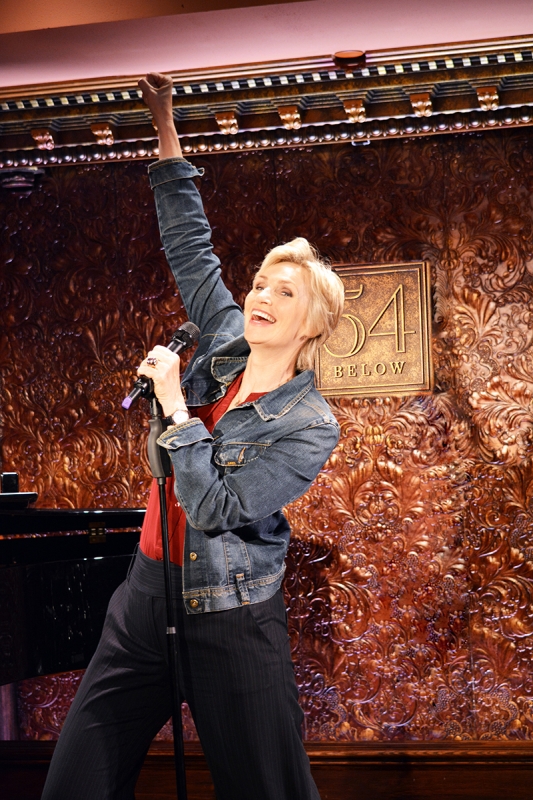 omedian and actor Jane Lynch will bring her Anti-Cabaret act to the Eccles Center in Park City this New Year's Eve. Photo Courtesy of ICM Partners

A Conversation with Jane Lynch

Let’s start out by being very clear about one thing: Jane Lynch is a one-woman entertainment powerhouse. For those who have been living under a rock and don’t know who Jane Lynch is, she’s an actress, comedienne and energetic vocal performer. Known for her comedic roles in Glee, The 40-Year Old Virgin and Best in Show, among a laundry list of many others, and she’s recently done a stint in Annie on Broadway. SLUG had a chance to talk with Lynch about the kick-off of her tour—An Evening with Jane Lynch, starting Dec. 31 in Park City at the Eccles Center Main Stage.

Expanding on her brief Broadway “Anti-cabaret Cabaret” show earlier this year, Lynch’s first show for the tour will be held in Park City to kick off the New Year in style, song and laughter. Not only will this be her first show for the tour, but it will be her first time in front of a Utah audience, and she is just as excited about this appearance as her fans are. She describes this as a “musical journey, with songs that have very little to do with each other,” except for the fact that she thinks they are a lot of fun and she likes them. When looking for a theme to tie everything all together she soon discovered that there really was no theme. Lynch strings together a wildly entertaining set of songs that she enjoys, felt that she was good at singing and that she finds entertaining. She doesn’t claim to be a “Judy Garland or Vikki Carr”—Lynch just loves to perform and wants to show the audience a great time. The equally talented and funny Kate Flannery, known from her role as Meredith on The Office, joins her on stage and the duo take on everything from Fiddler on the Roof (in the style of Yiddish sisters), Irving Berlin, three-part harmonies, to some swinging jazz. Just for the festivities, the night will most likely include a rendition of “Auld Lang Syne.” Lynch and Flannery are no first-timers, and have teamed up in the past for a traveling stage show, The Real Live Brady Bunch in the ’90s, which she says is “just as absurd and macabre as it sounds.” The two have been hanging out and singing together ever since.

Lynch had always wanted to do a cabaret style show, and got the opportunity earlier in 2014. What started as a four-night engagement in New York City, Lynch has since had the opportunity to expand it to a full touring production. She arranged music and happily found out that she had quite the knack for filling up the space between songs in a fun way. Some great and note-worthy collaborations went into her planning and arranging the show. Lynch credits her Glee co-star Matthew Morrison, who’s on tour with his own show, being an amazing support in answering her questions and giving her the ins-and-outs. During her New York City debut, both Morrison and fellow Glee co-star Cheyenne Jackson were both guests on stage with her. It’s the audience, she says, that is the fourth cast member in her show, as she both energizes from and draws off her audience’s energy. “Just come with your heart open and willing to be entertained.” She jokes: “You don’t even have to be in a good mood when you come, we’ll put you in a good mood!”

She reflects that getting her start in Chicago with The Second City Comedy Troupe helped her reach back to her roots of improv, sketch comedy and flying by the seat of her pants. The most important lesson she learned was the ability to develop confidence. Over her course with Second City she gained her confidence, “Having faith in what you have, and that’s enough. Just have faith that you are enough.” This has helped her evolve her career over more than 25 years to become a household name and continue to pursue her love for performing. When asked if she had any big plans on making this into a one-woman show she laughed. “That’s a great idea! I’m not gonna kick it out of bed!”

Just getting to pick her brain it is clear that this is a woman who absolutely loves the stage and to be in a position to entertain. “We always give it all,” she says. “We enjoy this so much that by the end, we are in love with each other and the band.” She and her Merry Band of Players have so much fun on stage. At midnight, plan to see Lynch give a bunch of happy and excited open mouth kisses to all of the members of her amazingly talented band, and maybe even a few lucky audience members who happen to be in range. This is not a show that you will want to miss, whether you’re a young-at-heart fan of a variety of music, or you are a newcomer fan of hers, An Evening With Jane Lynch is the kind of show that appeals to a variety of tastes, for any fan of pure, energetic, and sometimes silly entertainment.

Tickets are on sale now for An Evening With Jane Lynch on Dec. 31, at ecclescenter.org.