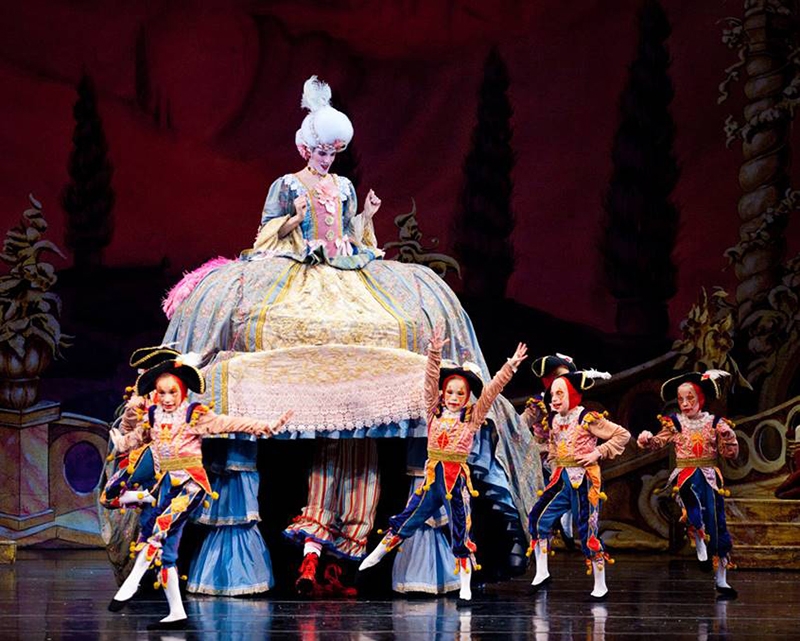 Two days before Christmas I was given the opportunity to experience the Willam Christensen choreographed and Adam Sklute directed Christmas classic The Nutcracker at Salt Lake City’s Capitol Theatre.

I remember the magic and mystery of the Nutcracker from when I was young and was excited to see this version now that I am older and more refined with my taste. I still felt the magic, but soon realized the need for this to be reimagined. I say this because as much as I love a good classic, it is always refreshing to see a new take on a familiar story.

Capitol Theatre was built in 1912-13 and remodeled in 1929. I love this Theatre and its classical architecture and rich history. In my opinion the only problem in this theatre is one that seems to exist in most theatres: the seats. I don’t know why every upscale theater in existence shows classic ballets while forcing their audiences to endure high school auditorium seats. Chiropractors must love people who go to ballets because Capitol Theater’s seats left my back feeling as if I had visited the medieval era and claimed to be a witch.

Even though the seats caused back pain, I found myself becoming engaged the moment the curtains opened and the show began. The lighting, the set design, and the costumes really combined to open up a whole new world. Year after year, Ballet West has managed to do justice to this well-known holiday story and this year was not any different. However, after 59 years, this holiday classic may need a few upgrades.

This is the 59th year of Ballet West’s production of The Nutcracker. Ballet West managed to maintain the traditional Victorian Christmas imagery of the story while encompassing a family friendly, lighthearted, mystical journey we have all come to expect from this holiday classic. Unfortunately while maintaining the timeless feel of the piece Ballet West sacrificed an opportunity to advance this production into something a bit more palatable to a 21st Century audience. Specifically, the 1940s style Chinese dance was more than a little off-putting.

The Chinese Warrior dance, as performed by Alexander MacFarlan, was technically impressive but socially cringe-worthy. In the year 2014, stereotypical Chinese clothing and what looks like kabuki makeup (which is Japanese) takes you out of the moment and makes your realize just how dated this number is. I really enjoyed the performance, but could not get past the vaguely racist representation of Asians within this particular scene.

That scene aside I have to say the child dancers were amazing—doing back handsprings in perfect formation. The number they did where the children come out from underneath the dress was perfectly choreographed and a huge crowd pleaser. One of the best aspects of this ballet is its ability to show kids the wonder of the ballet. There is a lot of fear that technology is slowly killing the arts, but if you take your child to a production such as this, you can be assured that they will no doubt find a new form entertainment that exists within a traditional medium. This production is a must for families with children. On the topic of amazing performances I feel the need to mention two individuals in particular.

The first performer who stood out as an amazing artist and technically unmatched performer was Lindsay Duerfeldt. Her portrayal of the wind up doll during the first act was nothing short of amazing. Her doll-like expression and jerky, mechanical motions brought the character of the wind-up doll to life. Lindsay Duerfeldt really went above and beyond with her performance; the only downside to her scene was its brevity.

The second performer who single handedly brought the audience to their feet with excitement was Joshua Whitehead. Joshua Whitehead performed the Russian Dance, which was a show stealer and earned a standing ovation. Joshua’s personality, energy, technique, and unbelievable jumps and twists had everyone in the audience applauding and asking for more. Sadly, this was the highlight of the second part of the production. It really seemed that the first part of the show had an intriguing narrative and captivating characters. However, the second part of the show had so many abrupt changes of style and energy that when you saw The Dance of the Sugar Plum Fairy, it could hardly compare to the Russian Dance.

A classic can be rewritten and remastered and still stay true to its roots, just as another holiday mainstay, Charles Dickens’ A Christmas Carol, has. How many times has this been redone and managed to open the door to a new generation while still maintaining what the previous generation loved about the story. The Nutcracker could stand some of the same treatment; parts of the Nutcracker have begun to feel uncomfortably dated. While the Nutcracker is a family classic and remains a great way to introduce a youth to the world of ballet, it misses an opportunity to really advance the material and take chances.

When you have a stage setting that is breathtaking, amazing performers, a holiday mainstay and a good band, the only fault lies in the occasionally dated material. I enjoyed Ballet West’s version of the Nutcracker and recommend seeing it as much as I recommend someone taking this story and reimagining it.