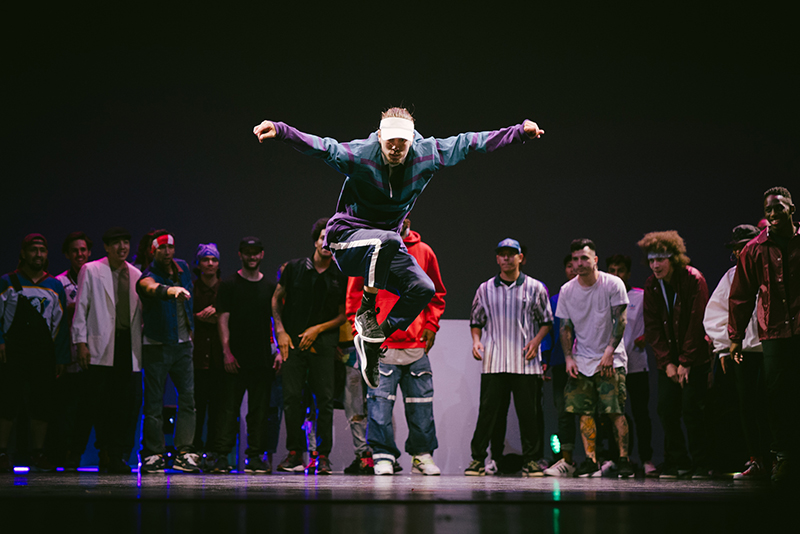 With it being the fifth consecutive day in Salt Lake to reach over 100 degrees, I found salvation in the cool embrace of the A/C pumping from The Rose Wagner Preforming Arts Center. I am here to check out They Reminisce, an event put on by the Bboy Federation that is part showcase, part story-driven performance, and part history lesson about the beginnings of hip-hop, both in its sound and in its culture. This event is the perfect representation of what the Bboy Federation stands for in its mission to preserve and share Bboying and traditional DJing techniques, all while educating its students about the roots of hip-hop music.

When I crossed through the lobby entrance, I could hear the tunes of hip-hop’s past bumping from the second floor, and being one of the first to enter the venue, I decided to check out the source of the music. Once I made my way up to the second level, I was welcomed with the sight of an authentic cypher with a DJ spinning the best tracks hip-hop had to offer from the ’70s, ’80s, and ’90s with a variety of Bboys and Bgirls warming up and showing off their moves before the main event. I took a seat on the side of the wooden floor where they were breaking and just observed. There were dancers of all different skill levels, younger individuals practicing popping and locking as the tracks mixed, dancers sharing techniques and walking through moves with each other, and even some of the vets throwing down windmills and other, more complex-looking moves.

As I sat, I noticed the crowd around the square, wooden dance floor growing, and a few people walk in off the street approaching the edge of the floor and moving with the beat throwing in their own moves. One thing I noticed and admired about the event was the amount of families in attendance. Some were clearly there to support family performing in the show, and others were moms and dads wanting to share the music and culture they grew up on with a new generation. You could see the wide-eyed looks as I’m sure some of this kids had never seen breakdancing and some tried to imitate the popping, locking, and footwork they saw on the floor.

Just when it seemed to get a little to crowded on the second floor, they unlocked the theater doors and allowed us to find a seat. As I sat waiting for the show to begin, they bumped an ever changing mix of songs from hip-hop’s “Golden Age” setting the overall atmosphere of the event. As everyone around me got settled, the lights dimmed and the music stopped. Josh Perkins (co-founder of the Bboy Federation) walked onto the stage to set the scene for the performance.

They Reminisce breaks itself down into three main acts with one intermission to help add to the feeling of the story. The show transports us back to when hip-hop as a genre and culture was still just word of mouth and only prominent at underground parties. We are schooled in the major players in the culture’s inception and the breakdown as to what makes hip-hop, hip-hop. Each act provides energy in both its performances and story, creating not only an entertaining show but also a history lesson keeping the roots of a culture alive.

The Reminisce itself covers everything from the ’70s-’90s with performers rocking decade-appropriate street wear, with each act featuring the best that each era had to offer musically. For me, the entire show was amazing—each segment bringing something to the table while transporting us back to that time period. Seeing the cyphers onstage with classic hip-hop playing felt like an organic situation and as the show progressed, the dancing occurred to back up tracks by Run-D.M.C., Whitney Houston and Destiny’s Child demonstrating the culture’s leap into the mainstream in the ’80s and lingering effects in the ’90s. During the final act, the show staged a classic cypher. Having Salt Lake veterans DJ SkratchMo and DJ Sam-Eye-Am is a true DJ showdown, both showing off their scratching abilities. The final scene also featured a battle between Salt Lake rappers Donnie Bonelli and Rhyme Time (formally known as Atheist), which—in a clean show, for sure—pushed the boundaries in a fun way. The show even sent a good message of bringing together both the mainstream and underground factions of hip-hop, that they both can coexist, and in a way, need one another to thrive.

As the curtain closed and the dancers showed of their moves in their final seconds onstage, it would have been hard not to walk away without learning something new about the culture of hip-hop. In the Fed’s mission to preserve and continue the sharing of traditional hip-hop culture They Reminisce stands as a creative and important performance in not only showing the Bboy scene in Salt Lake City but also illuminating a sometimes overlooked history to hip-hop music. –Connor Brady