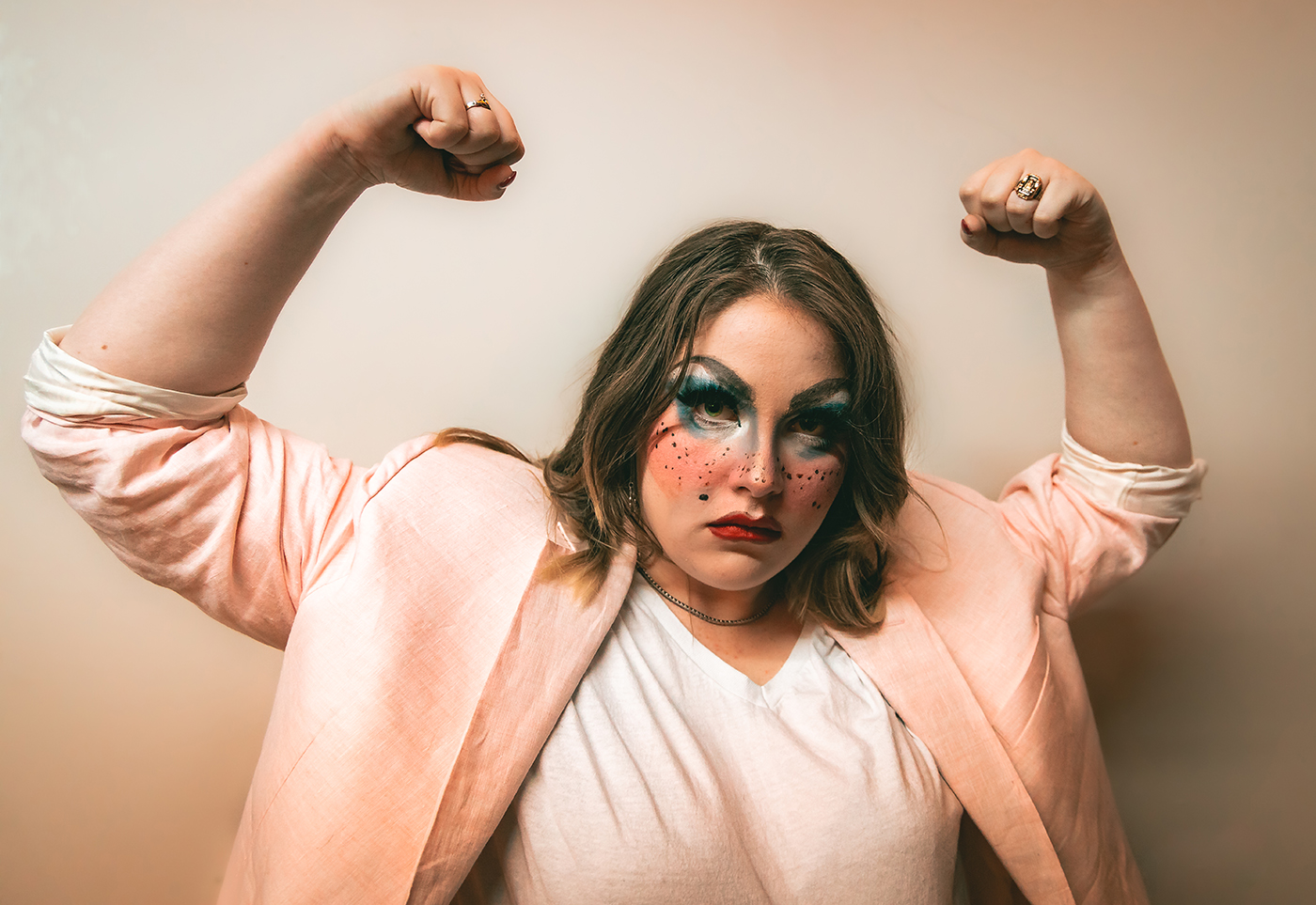 Orange wigs, campy performances and cheekbones cut so sharp they could slice you open if you get too close: Drag performer and artist Taylor Anne is all of these things and more. Known onstage as Poppycock Visqueen, a performance from Anne promises professional-grade vocals and a playful commentary on femininity. If you’re lucky enough, you may even witness a gravity-defying death drop or two.

Growing up in our own Happy Valley, Poppycock was always drawn to the spotlight. They joined the performance community at the ripe age of 4 and went on to study commercial music at Snow College. A near-constant exposure to dance, theater and music has defined Anne as an entertainer through and

through. And while their connection to the stage eventually translated to drag performances, it was used as a means of survival long before. Anne lost their father at the age of 3, and six years later, their mother passed away as well.

Living with their grandmother, Anne latched onto artistic expressions of emotion as a form of coping. “Entertaining and performing has helped keep me going through everything,” they say. Reconciling with trauma and working through the loss of their parents, Anne allowed themselves to be vulnerable and raw onstage. Years later, that same authenticity shines through in their performances as Poppycock.

“Entertaining and performing has helped keep me going through everything.”

Anne’s life as an entertainer didn’t lead them to the drag community directly. It wasn’t until a friend introduced them to the well-known series Ru Paul’s Dragrace: All Stars that they felt a spark of identification. “I got super attached to Trixie Mattel, and one Halloween, I decided to try her drag makeup,” says Anne. Mattel’s iconic blue eyeshadow, dramatic white lower liner and voluptuous lips notably inspire Poppycock’s signature look. However, Anne remains adamant about one cosmetic aspect that remains truly and purely their own. “I’ve always done cut cheeks because I have very nice cheekbones,” they say. “Even before I started doing drag, I was very into using contouring techniques to accentuate my face.”

While taking aesthetic cues from national queens like Trixie Mattel and Jinx Monsoon, Poppycock models much of their performance style from Broadway divas and comedians. “I try and emulate the feeling that I am a diva and I own the stage, while still keeping it vulnerable,” they say. Balancing aspects of campy playfulness and emotional relatability is at the core of Poppycock—a character Anne says is as much Taylor as it is Poppy. “While I’m playing Poppy, I am always thinking about how I can bring Taylor in,” they say. “When I’m performing, the line between Poppy and Taylor is kind of blurred; Poppy is almost just the vehicle for performance.”

“When I’m performing, the line between Poppy and Taylor is kind of blurred; Poppy is almost just the vehicle for performance.”

Poppy’s signature orange wig is a great example of the charismatic energy they channel. Paying homage to the coral flower itself, Poppy often pairs the vibrant wig with a rhinestone-studded black dress and cabaret-style heels. “It’s the combination of the simplistic and the outrageous,” they say.

“I try and bring humor and charisma into my performances, while still trying to affect the audience in some way.”

Often appearing alongside Poppycock are members of House Visqueen, composed of drag grandmother The Harlot, mother Aphrodeity and siblings Ana Lee Kage and Camie Alto. House Visqueen serves as a source of support and inspiration for Poppycock, especially drag sister Kage. “She often pushes me to try new things, plus her stage presence is really inspiring for my own shows.” With the guidance of their family, Poppycock has performed at venues across the city, including Prohibition and La Vie en Drag—Salt Lake’s first drag brunch cabaret. Poppycock also humbly mentioned their status as the two-year reigning queen of the Prismatic Hues Pageant, an annual event thrown by Haven of Hues. “Come for my crown,” they jokingly challenge.

As the city hesitantly transitions to vaccinated life, Poppy hopes to grace the stage more often. In fact, they are already booked for a performance at La Vie en Drag scheduled for May 30 and an event hosted by Prohibition called I’m Coming Out taking place on June 5. Poppy will also appear at Sunday Service with The Cabin Queens in Park City on June 27.

As a drag queen, actor and singer, this whimsical entertainer is one polished performer. Despite their cheeky name, Anne is anything but poppycock. Follow Anne on Instagram @theyaretayloranne and show your support by tipping them at @TaylorAnneProductions.