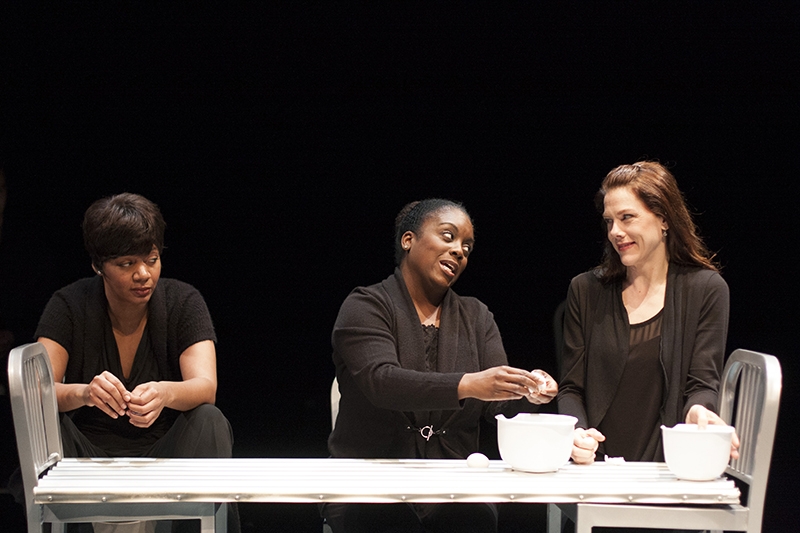 For as long as humans have been able to tell stories, they’ve been telling stories about their mothers. The ancient Greeks had their tales of Apollo and Artemis slaughtering the 14 children of Niobe in defense of their mother’s honor; Hamlet’s relationship with Gertrude has fueled literary discussions for hundreds of years; even Buster Bluth’s fixation on his mother Lucille has been weirding us out since 2003. Regardless of the situation, the relationship between a mother and her children is something that leaves an unshakeable imprint on all of us, which explains the need to explore this universal connection through stories.
The impact of motherhood was not lost on local actor-turned-playwright Carleton Bluford, whose debut play Mama will be premiering at the Rose Wagner Performing Arts Center this month. “My mom is an incredible woman,” Bluford says. “I wouldn’t be who I am without my mom.” Bluford grew up in the North Ogden area, and his mother Dawn was heavily involved in the performing arts. She pushed her sons into performing primarily as an act of service. One day, while hanging out on the set of Touched By An Angel—Dawn was a stand-in for Della Reese—the director offered him 50 bucks to do a quick scene. “That’s when I knew that I wanted to act,” Bluford says. “My mom had some resources, but she left it up to me to figure out. I sold some toys and my bigwheel to pay for my first set of headshots.” Bluford developed a taste for writing during his time at Weber State University, which led him to submit Mama to the David Ross Fetzer Foundation for Emerging Artists in hopes to secure a grant with Plan-B Theatre. “It was a blind submission, so no one knew whose play was whose. It felt awesome to have them choose my play,” Bluford says.
Mama’s debut also marks the first time that an African American playwright has premiered a play in Utah. As February is also Black History Month, the play’s release has become a milestone in Utah’s theatrical history. “It’s an honor, but I have huge shoes to fill,” says Bluford. “Yes, I’m an African American playwright, and I will have work about African Americans, but that’s not all that I write. I fear that I might get pigeonholed as the black guy who writes black stuff in Utah. We should be able to tell stories that involve all sorts of people.” With the momentum of Mama pushing him forward, Bluford has two additional plays in the works and a documentary that he hopes to submit to the Sundance Institute for consideration during the 2016 festival.
With scenes that bob and weave like a hotshot prizefighter, Mama explores the concept of motherhood through a mixtape of different narrative styles, which establish an almost cinematic experience for the audience. In between vignettes about the different ways that a mother struggles, sacrifices and fights for her kids, the actors deliver monologues that Bluford has taken from mother-centric Facebook posts that he collected while writing the play. The theatrical experience of transporting the audience into the different lives of Bluford’s characters would not be possible without the talented ensemble cast. Dee-Dee Darby-Duffin, William Cooper Howell, Latoya Rhodes and Elizabeth Summerhays shapeshift into their vastly different characters with a fluidity that makes you forget you’re sitting in a modest theater with only chairs for stage decoration. “We’ve got some of the best actors in the state and we’re lucky to have them,” Bluford says. It’s both a credit to the script and the actors to develop and maintain multiple separate storylines that begin in seemingly disparate places only to dovetail into one another in an organic way. There was also something quintessentially Utahn about some of the play’s vignettes—a nod to a feeling that all of us who have grown up here will recognize.
It’s difficult to discuss the victories and defeats of motherhood without also discussing the role of women in our country today. “I don’t think we appreciate women in the U.S.,” Bluford says. “I remember going to my friend’s house as a kid and their mom’s making sure I was fed and clothed—I was taken under their wing. It’s a thing that women do, so why not write a story about it?” Mama is essentially a story about mothers, but as the story develops, it’s easy to see a subplot about womanhood developing in the play’s margins. The real victory of the play is how the stories don’t take second place to these issues—they unfold very naturally, leaving the audience to think about the larger issues at hand on their own.
Mama is playing at the Rose Wagner Performing Arts Center from Feb. 12–22, and tickets are available at ArtTix.org.
Photos: