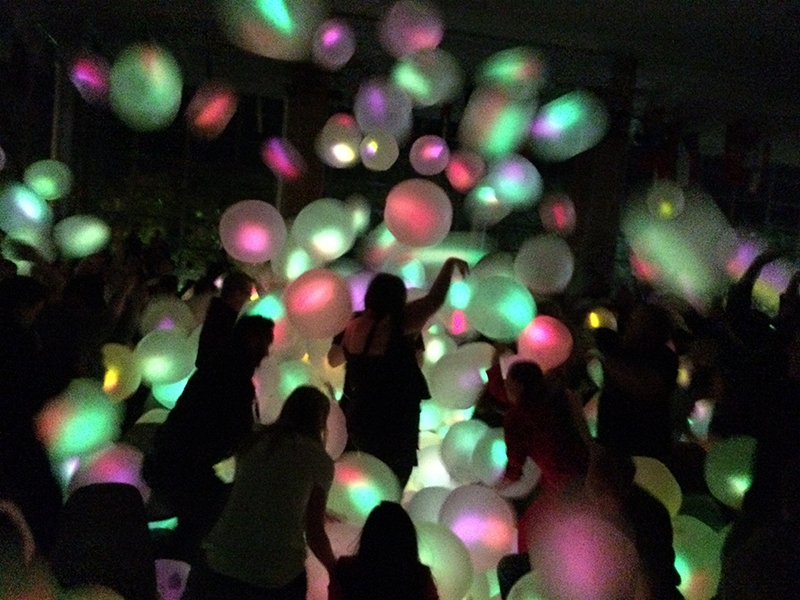 One of Chuck Palahniuk’s tricks of the evening: Two of the hundreds of glowing beach balls seen bouncing around here were chosen as recepients of special editions of Fight Club. Photo: Gavin Sheehan

No vomit was expelled during Chuck Palahniuk’s first ever book tour stop in Salt Lake City. There were gags and vomit sounds, but what came up seemed to be carefully swallowed back down. Prior readings in cities with softer stomachs had more projectile-like experiences, but not Salt Lake City. This night the subject matter ranged from genital mutilation to a very literal description of fire crotch. None of this phased the hardy Utah crowd and according to girl sitting next to me, “What do you expect? It’s fucking Chuck Palahniuk.” Which is exactly the point; if you know this man and his evil little scribbles, then nothing shy of chewing through your own intestine should phase you.

The Union Ballroom had comfy chairs. We had sharpies, inflatable clear beach balls. Palahniuk had a clever grin and a bag of tricks—the night teemed with potential. What’s the worst that could happen?

A gentleman who introduced himself as Todd gave us instructions for the beach balls and after inflation we were instructed to find a soft hole and insert plastic tubes in them. The experience almost seemed sexual but since the plastic hole was a ball and the plastic tubes were glow sticks it was far from arousing and reminiscent of his new book. For those that don’t know, Beautiful You is filled with non-erotic ridiculous sex. I wonder if Palahniuk was chuckling back stage watching college to elderly aged people stuff tube after tube into a tiny plastic hole.

Palahniuk comes out to standing applause and he thanks everyone for coming. He explains that his readings are normal readings and that he’s merely imitating the readings of the authors of old. He then shuts off all the lights and tells everyone to hit each other with their beach balls. The lights come back on and even the gullible kids catch on to his sarcasm. The beach balls had our names on them and the point of pelting each other with them was to win a Fight Club Special Edition book. Palahniuk had two minions sneak into the crowd during the recess throw back and snag two balls for the aforementioned prize. Once the winner was announced everyone booed them properly and Palahniuk prepared for his first reading.

“Can we dim these lights so I’m what’s important,” proclaims Chuck to various giggles as he begins the first story from his short story collection coming out in spring called The Facts of Life. In the first story a son turns to his dad and asks, “What’s the difference between a microwave and anal sex?” and the father turns to his son and says, “A microwave won’t brown your meat.” End story. Palahniuk is very punk rock, so we accept the abrupt endings. He then reads a second story in relation to where babies come from. I won’t spoil the details but some hints are: hygiene, Dodge Dart, pitcher/catcher, uncircumcised, marijuana, hand sanitizer, flashing lights, Sally Struthers and explosions. Finally, before we pelted each other with balls again, he read the short story Toad Prince. Loosely put, this is a coming-of-age story featuring a boy and his Petri dish-like phallus. Of course shenanigans happen, and the boy doesn’t get the girl in the end, but when you read this that will be the least of your problems.

After the pelting died down, Palahniuk asked the room if we had any questions that didn’t involve Brad Pitt. The audience responded with questions about his writing that ranged from character creation and intentions to form layout and plot focus. Just so you know Palahniuk builds stories around characters (so they come first), the stories come from things he just can’t let be forgotten and the form is an elaboration of the aesthetic those ideas have already created (basically what fits or intentionally does not).

Palahniuk is generally not a fan of personal questions from moderators or reporters when selling books, but this night he answered two very personal questions from his fans. He was asked about hitting rock bottom and has that experience ever shown up in his books. Palahniuk explained that in a backwards sort of way it had. He wrote Choke before his mother died and it has a scene where the lead character tries to resuscitate his mother after she’d been eating brown pudding. When the character pulls away, he has a brown mouth from the pudding. Palahniuk, while promoting the movie adaptation of this book was visiting his dying mom. One morning he woke up to find her lifeless and called the hospital. He was advised to give her mouth to mouth but since she’d been dead so long the brown fluids from her lungs were now in her mouth. When Palahniuk pulled away he had a brown mouth. He explained that it was very creepy moment for him.

The second personal question was more of a, “What’s your view on things” or what does it all mean type question. Palahniuk placed his hands on the side of the podium and gave an answer that was a highlight of the show. In the answer, which might as well have been a story, Palahniuk explains that he was jet lagged in Paris at a party his editor threw before his international book tour. The whole night, he just wanted to rest but was a good sport about it till the end. Finally, he begged a couple to take him to his hotel and they accepted and took him to their small car. On the way they kept varying their speed and driving irrationally so Palahniuk explained, “I thought they were high.” All the sudden they crash into a curb in front of the Eiffel Tower and jump out of the car and say, “Hurry Chuck the cops are coming!” Palahniuk jumps out of the car and starts chasing after them. They run all the way to the center of the tower and tell Chuck, “Look Up.” Palahniuk looks up right at midnight to see the lights going off and watches all the lights shut off till it reaches the top. It was a beautiful moment. He then finds out that this was planned the whole night and everyone wanted him to see this beautiful thing. Palahniuk then turned to person that asked the questions and said, “That’s it.” Palahniuk explained no matter bad life gets that this could all be some kind of plan to see something beautiful at the end. The bad has to exist to make the good so much better.

Finally, at the end of the night Palahniuk read the story Guts from his book Haunted. When I had spoken with Palahniuk a few weeks back in an interview I told him how much I hated this story and that it made me slam the book shut. The pool incident is one of the most shocking moments in fiction and it’s told with almost a whimsy. The stories of gender modification and emotional manipulation never phased me, I told him, but this story was beyond my desensitized little heart. So in true Palahniuk form, before reading the story he pointed in what I’m pretending was my direction and said, “This is for you” and proceeded to tell the story in a way it could not be closed. Which in hindsight was very fitting.

When the light came up as a treat, beyond the candy he’d already lavished on us, he and Todd threw out signed severed arms to all the audience members. He then wished us goodbye and left everyone with his new book to ease the pain. Thundering applause escorted him out and everyone had an amazing time. So from all of us in Salt Lake City thank you for visiting us Mr. Palahniuk; please return in the Spring to teach us all The Facts of Life.