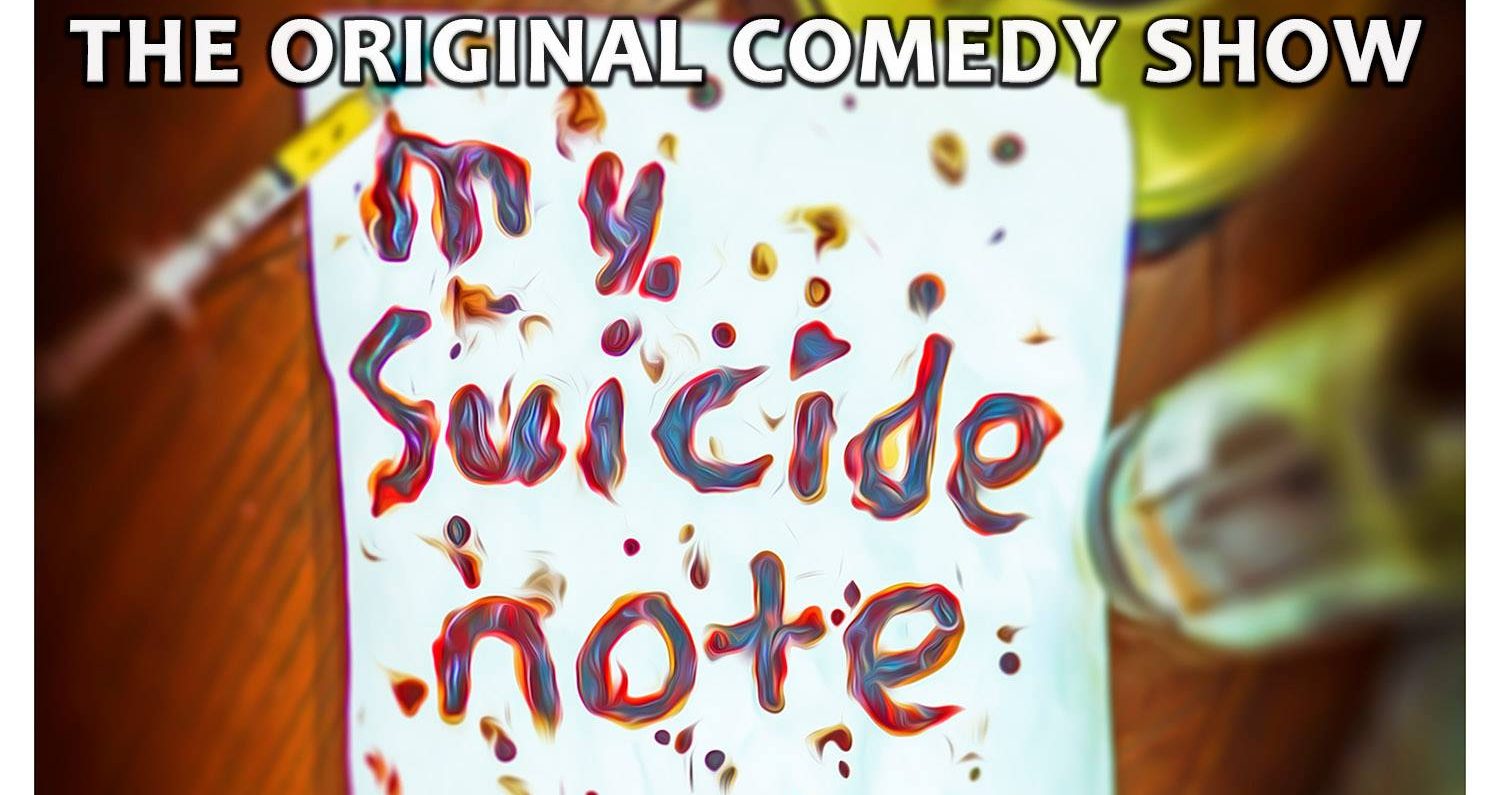 Few comedians can take their own, deeply personal, dark subject matter and transform it into an art form. Collin Williams has been traveling the world doing just that with his full-length, stand-up comedy special, My Suicide Note. A local himself, Williams has been doing stand-up since he was just a teenager, from Las Vegas to California, and then back to Utah. The old saying is that tragedy plus time is the formula for hilarity. Williams has over 10 years to his name doing stand-up, and, well, his whole life being himself. The show comes from Williams’ dark past, and the multiple suicide attempts he survived, which culminated in the titular suicide note.

It hasn’t been an easy process for him, opening up publicly about his pain and turning it into a comedy show. Williams’ comedy never started out this raw—his jokes were about the typical ex-girlfriends, observations and other mainstream topics. “I was trying to protect people that had hurt me,” he says. He held back but sometimes made a few short jokes here and there about his past. Williams never had a great chance to pitch the show on a “normal” comedy show in Utah, as a courtesy to other comics who have vastly different material than his. “If there is one thing that the state of Utah has, it’s the culture of repression,” he says. Where Utah audiences typically flock to see good, clean fun, Williams never found the right moment to break away from the typical comedy-club material into his dark tell-all stand-up. Then, last year, there was a turning point in his life.

At the time, he was actively trying to kill himself. He had a pretty fail-proof plan that he was determined to go through with. Just before he did, he had a “little voice” pop into his head and thought to himself, “Awesome plan. Sounds great. Love this all. You could do this, or, what if maybe you don’t and check yourself into the psych ward right now? You can always come back and do this next week.” He checked himself into a psychiatric ward instead. He was still so sure that he’d get out and go through with it—in the hospital, he wrote a 12-page suicide note detailing why he felt like he needed to. When he got out, he published it online on his own personal blog. “Every single secret was out there,” he says. “There was no one left to protect. I’d already told everything publicly. It was so mentally freeing.” He had nothing to hide anymore. “It didn’t solve everything, but from there, I ended up developing the show off of that.” The show he developed was taking that suicide note, secret for secret, and turning it into dark, delicious, comedy gold.

As a comic, his coping skills were to make jokes of everything around him. He has seen the other side of suicide, too, as he’d been at the bedside of a friend who attempted it as well. He was thinking, “I can keep trying to kill myself, or I could turn this into a show. And then I tried both.” After he published his note about his trauma, no one really freaked out, which surprised him. While writing the show, he had other dark moments, though. One in particular was a night where he thought he started out making art, and ended up writing another note in blood, which he felt was an emotional release. This actually did make a lot of people panic, as he also tried to self-medicate with alcohol. Spoiler alert: He survived that night. That second note is now the inspiration for his show poster. Writing about it, for him, is a way to help his healing process. “It’s the way I work through things,” he says, “but I understand that not everybody does.”

Williams’ show was initially set to launch in January 2017 at Sandy City’s now closed Sandy Station, however, as he puts it, “even my venue committed suicide,” he says. “What the hell is happening?” When his show was canceled due to the sudden closure of the venue, he had to regroup and decided to take the show

on the road nationally, and then—as it happened, by chance—around the world. “It was a rough week,” Williams says. He actually ended up back in a psychiatric hospital in Pocatello, Idaho—“the worst psych ward I’ve ever been in my life.” He recalls that at this hospital, they would Skype in the therapists. “Watching Dr. Phil at home would have been better,” he says. He checked himself out and took his show on the road. Once he got out there, he “technically” got to workshop the show at Second City in Chicago, as well as Improv Olympic, stateside. It’s a big “technically” because he was there on a night they were running shows, and not the improv they are known for. Although, to be fair, “if it comes down to a dick-measuring contest,” he still has bragging points. Not everyone can say that. He found a cheap plane ticket to London and decided to spend some time in Europe with the show. As he puts it, he’s got a credit to his fame for “breaking down crying in every major transit city” that hen was in. “London buses, check,” Williams says. “Scotland’s underground metro—they have one subway that runs in a loop in Glasgow—and I’ve cried on that.” They would remind him of the time his ex-girlfriend mentioned that she liked the city he was in. “I’d be in Paris [sobbing], ‘I wonder if this was the bakery she told me about!’” He notes that Paris is a beautiful city as he was looking around, thinking, “Look at all of these happy people. Fuck ’em.” His show was received well at all of the locations he performed. But, surprisingly, he’s only ever “walked” an audience member at a bar show in Dublin, Ireland. “With all of the material and everything I’ve done, it was Dublin. I know! I was surprised.”

As we mentioned what it would take to kill yourself in style, now that he’s getting notoriety, we determined that going out with drugs and hookers would be easier abroad. “If only comedy paid enough for coke and hookers,” Williams says. “They do pay enough for hookers in Athens. Ten Euros.” He realized when he was sitting in a bar that his bar tab was “One-and-a-half hookers.” There just aren’t a lot of well-paying jobs since the economy collapsed in Greece. “Kudos to them for legalizing [sex work] so those girls don’t end up in worse situations. Kudos to Greece for promoting safe sexual health,” he says, applauding.

Now that he has tested his show in multiple cities and countries, it was only fitting that he brought it back to where it was all supposed to begin. Returning to Utah, Williams will bring the show to Club 50 West for a one-night performance that will benefit charity. The return promises to be bigger, better, and bolder than its stunted beginning and closed venue.

A few disclaimers up front: This show is not going to be for the easily offended and is not family-friendly due to the blatantly stated subject matter. With the name My Suicide Note, you’ve been forewarned. “A lot of people don’t do research before going to a comedy show,” Williams says. “They just go.” He adds that it’s “equivalent to just showing up to a movie theater and buying a random movie ticket, then being angry that Quentin Tarantino has way more violence than A Bee Movie.” He advises always to research a comedy show. “I would rather have an audience of happy people than an audience that is half-happy and half-debating about walking out, because that’s not good for the room as a whole.” Williams points out that “you will still get plenty of people that will walk out that will say there are things that shouldn’t be joked about. I think we that now hear that on an almost weekly basis.” He adds, “What’s amazing to me is that you watch the news and you think, ‘Those are our problems? The jokes?’”

Williams cites a statistic: “There have been 5,224 people killed by terrorists so far in 2017,” he says. “There’s an estimated yearly average of 14 people that have been killed by cow attacks. How many people died this year from jokes? My suggestion is go to a comedy show, order a burger and fight back.” He adds in a somber tone that he’s not going for any sort of shock value. “I realized that I can’t make a good honest joke off of someone else’s trauma,” he says, adding that there’s a line that can be drawn in comedy on what is or isn’t OK to joke about. “Is this something where you’re attacking a victim? Or are you expressing your own pain, your own emotions, or your own thoughts on an issue? Just because you are talking about something doesn’t mean it’s wrong, even if it’s a controversial topic.” For clarification, he divulged his set list and went over some of the topics he will cover (in no particular order): school shootings, cereal, suicide by multiple methods, Casey Anthony, abuse, the NFL, a couple of dick jokes (by his count, 12), vegans, child molestation, the Chinese (but in a good way), his religious upbringing as a Jehova’s Witness, Oompa Loompas, ex-girlfriends, infidelity, both god and money, cutting, men who like cats, the Unabomber, alcoholism, cold cases, suicide (as a side note) and psych wards. He will also be defending Louis C.K.’s past jokes.

Understandably, the nature of the show is incredibly dark, but it is also very real. Williams calls it a “10-percent show.” He does the show for his own catharsis. “Ten percent of people will really lov

e it,” he says. “For 10 percent of people, that’s the way that we embrace dark times. It’s through humor. Then there’s another 10 percent of people that it will traumatically scar them, if it’s their immediate way to try to deal with it. There’s no one-size- fits-all to depression.” He ultimately wanted to use this Salt Lake City show as a way to help other people, so he decided that he would donate every single dollar of this show to local suicide-awareness charities. While this is his outlet and his process, he wants to help people “who heal in different ways as well.” He points out that sometimes even people who want to use comedy to help themselves may still need help from other avenues and medication, too. “You should definitely not try to replace medication with jokes,” he says.

After he wrote the show, Williams unfortunately did end up attempting suicide again. “Even I don’t exactly know what the ending is,” he says. “This is how I keep. This is a motivation for me. This is a way that I have therapy. Honestly, the show is the one thing that keeps me from dying.” By the way, he does add that his girlfriend hates it when he tells her this. But he points out that he has some justified trust issues.

My Suicide Note will have its Utah premiere on Friday, Sept. 15, at 8 p.m. at Club 50 West. Tickets are $12 in advance or $15 at the door, ages 21 and up only. Proceeds from the show will be donated to Utah suicide-prevention charities, including the Utah Chapter of the National Association of Mental Illness. Even if you cannot make it to the show but want to support mental-health awareness and suicide prevention, Williams asks that you please donate to a suicide-prevention organization of your choice, NAMI or an organization that helps children who have been abused. Hopefully, he says, this show will cease to be necessary. You can find out more by checking the Facebook page for My Suicide Note or suicidenote.me.