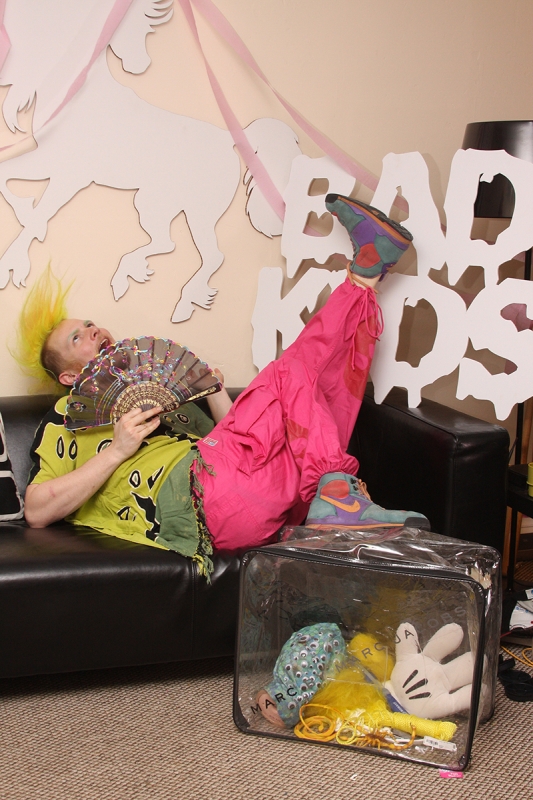 Always one to dress goofy and weird, Perry quickly became friends with the Bad Kids and soon amped up his fashion sense as a core member of the Collective. Photo: Gil Garcia / thatguygil

Salt Lake’s Bad Kids Collective, born from Club Kid fever dreams, Internet-embellished lifestyles and queer performance attitudes, has galvanized Utah drag culture in recent years. The Bad Kids, part autonomous happenings of human bodies, part multi-media selfie installations, are cultivating a community of gender performance in Salt Lake where diverse expression reigns, where talent refers not to exclusive abilities, but rather the courage to perform one’s artistic vision to completion. For them, every day is drag, every body a context to apply with costume, cosmetics and ontological anarchism.

Even though he’s never performed in the conventional sense—on a stage, that is—Perry’s costumes and attitude are highly performative. Inspired by performance artists and clothing designers such as Leigh Bowery and Richard Torry, Perry’s outfits often evoke reactions from audiences. During a SLUG photoshoot at the Utah Museum of Fine Arts early last year, Perry wore a cotton candy-esque wig that stretched over his head. At each end, black streamers dangled to the floor, while gold chains and reflective fabric draped Perry’s body. Walking through the museum, it was as though he himself was a moving installation. During an Easter-themed Bad Kids performance, Perry walked around Metro Bar dressed as “Zombie Jesus” while handing out Peeps with Tylenol and Excedrin pushed into them.

“If you were going to put a name on it, it’d probably be Club Kid,” says Perry of his style. With the contentious definition of drag these days—drag being held to the standard of female impersonation—Perry recognizes that any outfit is drag. He says, “Furries are doing drag; Leather daddies are doing drag; The postman is doing drag; The lawyer that goes to work in a suit—it’s fucking drag. You’re wearing something to make an impression on somebody else to make them think something about you. Even going around with your hair neon colors is drag. I’ll be the drag that’s not drag.”

For Perry, a certain look isn’t about fashion or style—rather, “taking something that’s completely useless and turning it into something that looks cool,” he says. Much of what Perry wears is thrifted, handmade or modified. “I like to go to the D.I. or the clearance rack and find the stupidest reject clothes that are too much and put more much on top of them, just to be obnoxious, really,” he says. “It’s all about what you do with it.”

Performative costumes aren’t the only things that Perry contributes to the Collective. Having studied printmaking at the University of Utah, Perry puts his artistic abilities to practice by making various adornments, props, lasercut signs and costume pieces for the Bad Kids. Decorating his living room are a large Bad Kids sign and unicorn, which he made with a CNC router using scrap materials. He’s also got a knack for making decorative adornments—he’s made props for Chartreuse and earrings for Bad Kids founder Scotty Ray, for example. He’s currently working on a purse for Lisa Dank.

The Bad Kids Collective is the community in which Perry thrives. When asked about feeling the pressure to get up onstage, Perry expresses that it doesn’t faze him. “A lot of people, and when I say a lot of people, I mean everyone, are like, ‘When are you going to do that?’” he says. Perry isn’t a minor character—his creative contribution and support are what the Bad Kids are all about: Community. “If you ever need help, there’s always people that can be a body for you, or pick up your shit when you’re done with it,” he says.

Rediscover the Bad Kids on Jan. 23 at Metro Bar for the first installment of “6,” a multi-media sensory experience featuring visual art, performance installations and music.