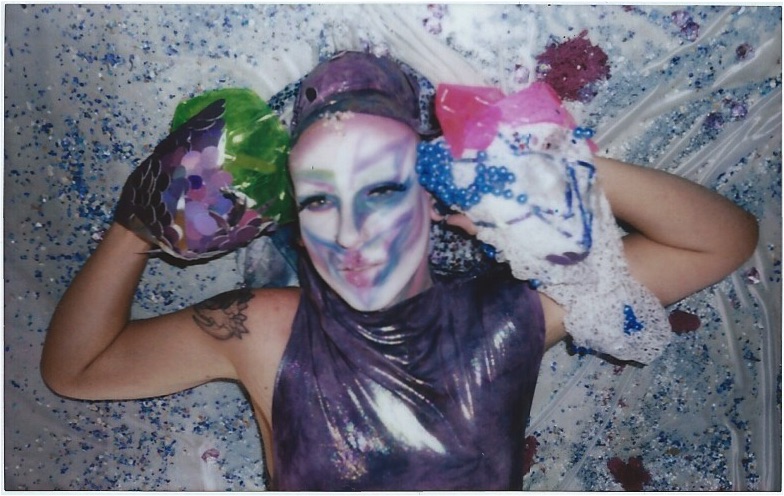 Drag queens are well known for their loud, boisterous personalities and performances. But every once in a while, one queen speaks volumes without ever raising their voice. Enter Eden Flesh, a young queen from a small town in northern Utah with some big things to say. She may have hailed from a close-minded community, but Jared Higley is one of the most openhearted individuals I’ve had the pleasure of interviewing. His large, spooky stature and painted blue scalp come across as potentially intimidating at first, but as soon as he says “Hello,” I see right past his morning-after look to a sweet, small-town kid.

Like many young queens in the Salt Lake area, Higley was first inspired to try out drag for himself after watching a Club Sound gig a few years back. There, several local performers including Odge, Klaus and The Bearded Femme took to the stage, blew his reality to bits and pieced him back together again. Feeling motivated by their performance, he took what he saw and began applying it to his own life. “It was a Björk-themed show, and it really opened my eyes that I could do something like this and that there was a place to actually do it,” says Higley. “I was intimidated for a long time, but … my life was forever changed at that point.”

Thus, Eden Flesh was born. The character became someone who embodied a sense of femininity that Higley felt had been lacking in his life. “She’s something different,” he muses. “She’s the most powerful aspect of my feminine and masculine sides and it comes together in this thing that’s not really human anymore. She has definitely given me strength that I didn’t realize I had. I can stomp when I’m in fucking heels and feel really good about it.” In that sense, it is like any art—shaped by a creator who needs to give life to a feeling in order to stir the emotions of an audience. That momentum has carried Higley throughout his drag career.

Higley explains that he chooses to “focus on self-expression,” he says. “I try to work with body image a lot. I don’t necessarily perform about it in an obvious way. I like to go out there knowing that I might not be the ideal beauty, but expressing positive body image is very important to me.” While some of the local drag performers use the stage to voice their political statements, Eden Flesh focuses on using her self-confidence to encourage others to “feel comfortable and walk around how you want to.” Higley also credits the digital revolution for encouraging body positivity. “Some people think it’s narcissistic and easy to make fun of … but the open communication is great and shows we’re all more alike than we realize. I love when people feel confident about themselves to share themselves online for the whole world to see.”