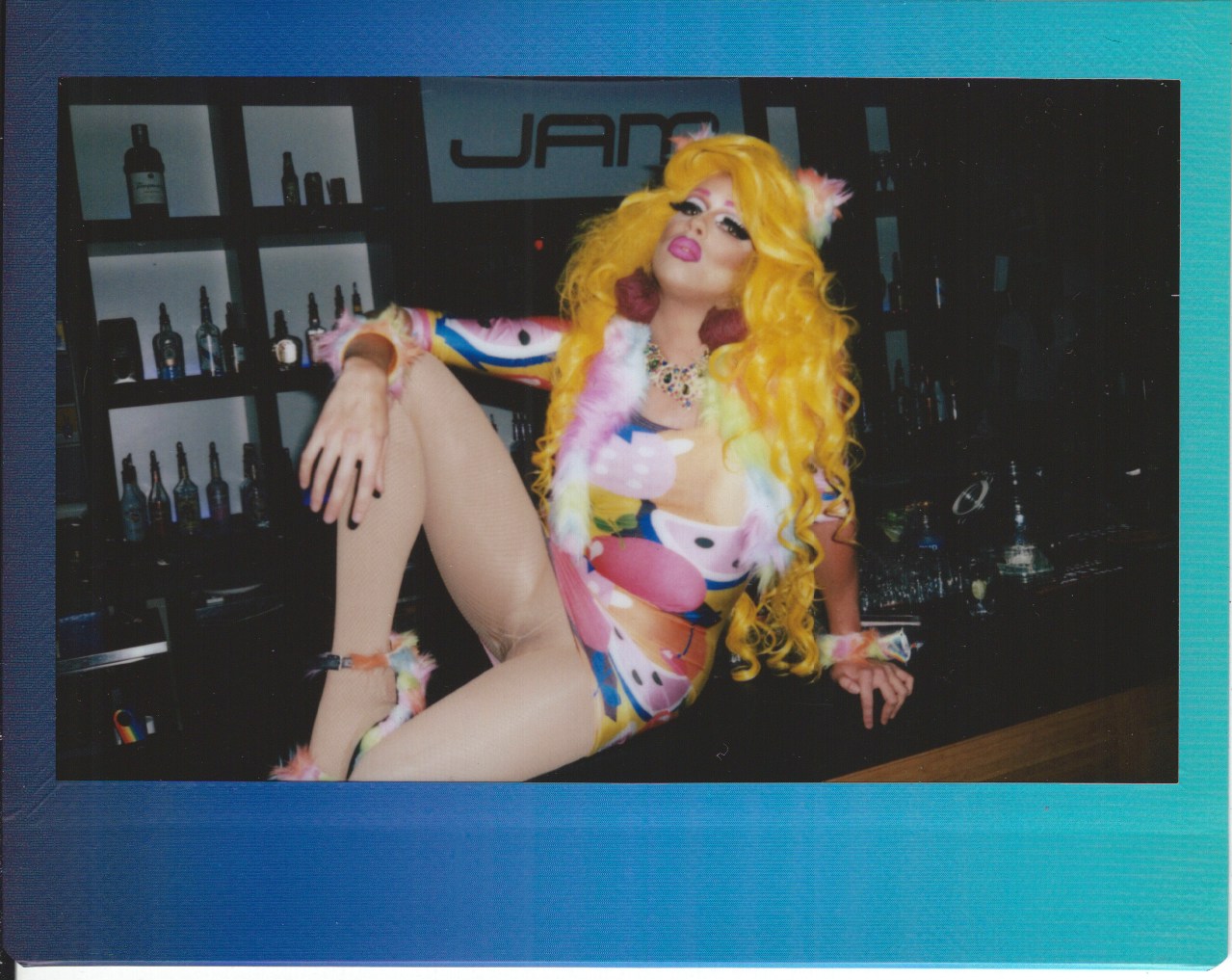 Originally from sunny Southern California, Samuel Mckitty, aka Kay Bye, like her name might imply, is a sassy queen full of attitude and cartoon glamour. Her style is reminiscent of Saturday morning cartoons if they were to jump out of your television screen and start strutting up and down your living room. She got her start in drag right here in Salt Lake City after being taken under the wing of fellow SLC drag queens. After several years of boredom took its toll on her, Kay Bye decided to ramp up her social world by diving headfirst into the wonderful world of drag and has barely slowed down since. Kay Bye admits she never thought she would have the dedication to do drag herself because she “barely has the patience to shave once a week,” but one fateful day, the joking ended, and a date was set for an actual performance, and two years later, she’s still stuck with it.

The past few years have swept by in a blur of wigs, makeup and poofball earrings, as she has honed in on a craft she had little experience with prior to that first show. “I had never even played with makeup before,” she says. “There were some moments, as a little gay boy, [when] I would go into my mom’s makeup and play with that. But it wasn’t anything I decided to practice.” She goes on to say that she looks back on and grimaces at those early days of drag. Since then, her style has transformed into a colorful display of cartoon-inspired looks based on her favorites like Jem and the Holograms, Jessica Rabbit and even The Muppets. “Creating a character is hard, and I think there’s a lot of pressure that comes with being a drag queen and making up this character,” she says. “It took me a long time to realize that I had created a character. It was just more of a look. But Kay Bye and Sam are very much the same. Just put alcohol in us and we can’t shut up.”

When it comes to performances, Kay Bye says her routines incorporate a bit of everything: fashion, comedy, weirdness and glamour. “When I’m at a club, I definitely want to look good, so I focus on the look,” she says. “Especially with my makeup, I want to demonstrate something that’s more animated than something fishier. But with performances, I have a natural comedic sense and I have my moments.” She goes on to recount a number she did dressed as Family Guy’s Consuela character to Meghan Trainor’s “No” and replaced every “no” with Consuela’s. Thinking back on past performances, she admits, “I didn’t realize that most of my music is bratty and has a lot of attitude. I don’t want to make people think that I’m better than them, but it’s just that stage presence.”

Her confidence might teeter on the edge of cockiness, but what’s a drag queen without an immense amount of confidence? Although the world has plenty of mean girls, my interview with Kay breaks down that barrier a bit, and I begin to see a kind kid in there behind all the makeup and attitude. “Growing up, I was very much a pushover, and people walked all over me. I didn’t have any confidence in myself,” she says. “Now, being 24, I definitely have a sense of confidence. I wouldn’t say I totally know who I am, but I have this presence that I want people to recognize.” Her Aquarian attitude is truly unapologetic, and I’m here for it.

Kay Bye’s confidence has gained her access to some of the best groups of drag in our community. She has performed multiple times with the acclaimed Beauties on Broadway group, which is a Salt Lake–based event where the majority of the queens can be seen dripping in velvet gowns, gaudy jewels and even piles of hair. “Queens like Gia Bianca Stevens, who are full pageantry, made me change my opinion that I could also be that queen,” says Kay Bye. “I’m not as extravagant as she is, but I’ve definitely picked up a level of sparkle from her.” Kay also has ties to the recently rebranded Haven of Hues. The first drag performance that she ever attended was back at the old Metro Bar, where she saw the Bad Kids perform. That was her first experience with “non-feminine drag.” She goes on to admit that befriending local weirdos like Chelsea Siren and Opal Ascension has really meant a lot to her. “I never thought in a million years that I would be included in something so artistic,” she says. “It makes me want to push myself and do things outside of the box.”

Kay Bye accredits both groups for shaping her style of drag and fondly calls them her parents. “It’s weird going between Beauties on Broadway and Haven of Hues, since I feel like I’m somewhere in the middle: too pretty to be a club kid and too weird to be a beauty,” she says. But I think this combination is exactly the type of bridge we need to encourage more of in our little Salt Lake community. Kay Bye’s story conveys a wonderful message that inclusion can be found in some of the strangest of places, but obtaining the encouragement to show off your sass can boost you straight to the top.

Be sure to check out Kay Bye online @OkayByee (with two Es) on Facebook or on Instagram @theonlykaybye, or you can pick up some merch and support a local hero at bricksgaystuff.com/collections/kay-bye. See her next performance on Sept. 30 at Club Jam for a special Kay Bye 2.0 comeback!