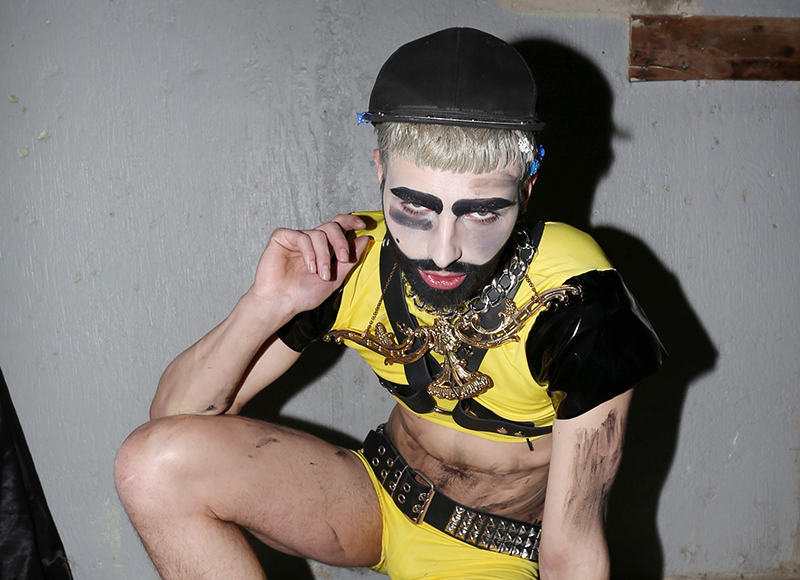 Kenneth Leon is a multi-faceted artist best known for his imaginative visual photography and performance art. His Barbie photography has immersed him in a community of doll lovers and, in that world, he is in total control. He scalps his dolls just to create new fantastic hairstyles, paints their faces with skill and precision, hand sews their very own outfits and constructs worlds in which they exist in pure plastic harmony. Over the years, he’s created quite the collection. With over 500 Barbies, 200 articles of clothing and literally thousands of photos, he’s been completely dedicated to his art for the last decade.

It all started his second senior year at East Hollywood High School when he finally started to give a shit and realized his infatuation with dressing up Barbies his own way and photographing them. “I don’t really care about her, but I love how it’s a little person,” he says. “I liked the idea but I wanted my own spin on it. It’s definitely got to the point where I have a style that you can tell is mine.” His love of miniatures started when he was a mini Ken himself—hiding under his bed playing with dolls his parents forbade him to have—and has grown into an art form that reflects in his photography and performance art.

There’s an entire universe to Kenneth’s doll art. There are The Fantastics (the popular bitches) each with their own unique names, personalities and styles all created by Kenneth. The Fantastics include Di Skeftington, Madison Mays, Usula, Jeanice Danstan, Lucretia Moon, Jax, Emma Tamlin and Taira McQueen. “They’re my biggest stars.,” he says. “Then there’s a Queen, and every five years, there’s a new election. I just had my first one year before last, and Taira McQueen won.” He’s attempting to hone his art down to strictly four seasonal collections a year for his Fantastics. That might seem like a lot, but comparatively, it’s just a hairflip to this Barbie babe.

Even though he’s the curator of an entire world of dolls, he doesn’t consider himself a character himself within The Bad Kids Collective. Pretty new to the scene, Kenneth says that he stands out in a way because he “doesn’t do characters,” he says. “I’m just a Barbie designer.” He was a participant in the Bad Kids pageant in 2015. “It went really well, and I had a lot of fun,” he says. “I got really close with some people. I love working with the Bad Kids. They’re a lot of really creative people, and now I have so many sisters. I feel like when I showed up though I was the first little baby brother. There’s all these girls and monsters and creatures, and then there’s me.”