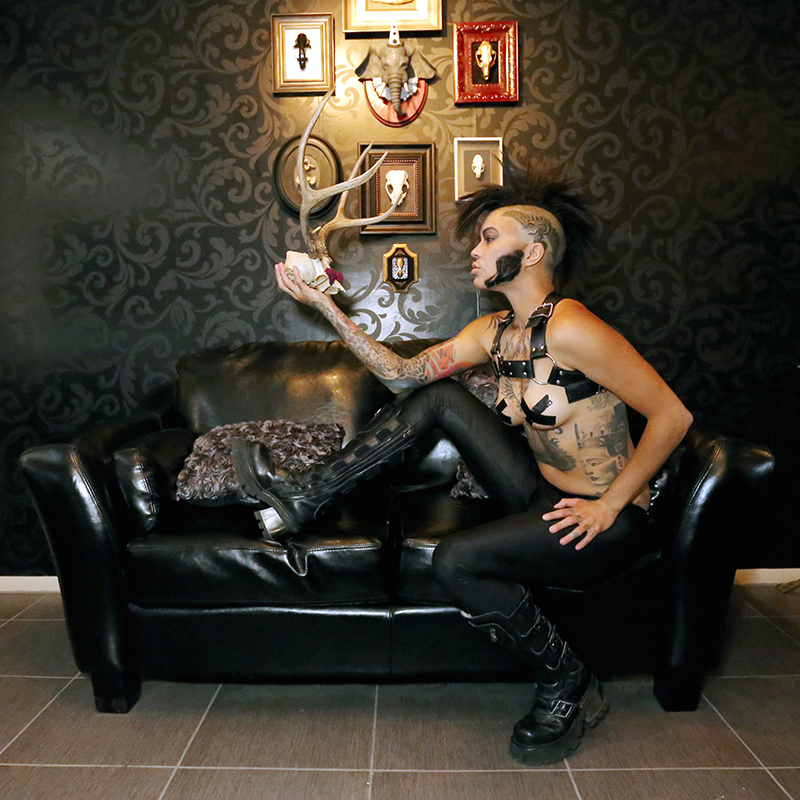 With so many queens on the scene, it’s invigorating when a strong drag king stakes a piece of the stage. Tori Loke is a bi-structured creature who flawlessly represents both ends of the gender spectrum of drag. She’s beautiful—long and strong, boasting a smile and a gentle aura. I’m instantly intrigued by how captivating her look is. Tori is sporting a Rooney T-shirt featuring drag queen Kim Chi’s quirky catchphrase, “Donut Come For Me.” I can see the similarities between the look of the bubbly tank and the energies Tori herself was giving me. It almost perfectly reflects the blend of femininity and masculinity that exudes from her as she opens up about herself and her art.

As soon as she sits down, she extends a warm handshake to me. It’s confident and firm. I immediately feel at ease around this creature, especially when I ask her straight up what pronoun she identifies with so I wouldn’t make an ass out of myself unnecessarily. Her answer is simple—that she prefers to be non-binary. “I’m a little more free-flowing with that stuff than other people. I honestly … don’t think I identify with either, but sometimes people need to put a label on it. My pronoun as Tori is just whatever you want. With my family and friends, it’s ‘she,’ and with 6-year old kids, it’s ‘he.’” It makes for a much more organic and authentic conversation when you are allowed to interact with an individual who carries such strong aspects of both genders.

I ask her if it ever makes her uncomfortable if people get it wrong. She explains that she doesn’t really mind if people refer to her as “she” or “he,” but what really yanks her dick is when people try to edit others on the correct pronoun. She muses about a recent encounter with such an instance when she “was at this family party and a little boy pointed at me and said, ‘Him?’ and his mom said, ‘No, her.’ And that makes me uncomfortable—the correction.” She brings up a valid point that I can get behind: What is the purpose of trying to adjust the way others identify with one another? But she does clarify that although Tori retains a distinct amount of femininity, there is a distinct masculinity to her drag character, Loke.

Loke is a powerful character who commands the stage with his sharp jawline, a hawk of hair atop his head and a strong staff in his hand. His look is reminiscent of a warrior—both dominating and savage. “I always want people to see a powerful me onstage,” Tori says. “My last few performances have contained messages of hope and strength and individuality and power—hope and love and light. I want to be a powerful character.” And power seems to be a resonating descriptor for the sparkling creature in front of me.

Although he’s quite new to the scene (Loke’s first performance was in the 2015 Bad Kids’ Pageant), Loke is a remarkably realized character that represents aged and complex ideas of gender and strength. “When I started doing drag, I was coming out of a really dark place in my life with a lot of struggles,” says Tori. “And when I started developing the character of Loke, there were parts of my life that I needed to kill—memories I didn’t want. So to help me deal with my own demons, I created my own demon or spirit to kill those things in my past that I needed to get over.” Onstage, Loke acts as a spiritual charging dock in drag for show-goers. “In developing that character, I felt that I was giving my audience a lot of that power that was helping me get through,” Tori says. She tells me it didn’t always start that way, but as time has progressed, Loke has matured to a performer who is aware of the needs of an audience, particularly in these dark times for our nation.