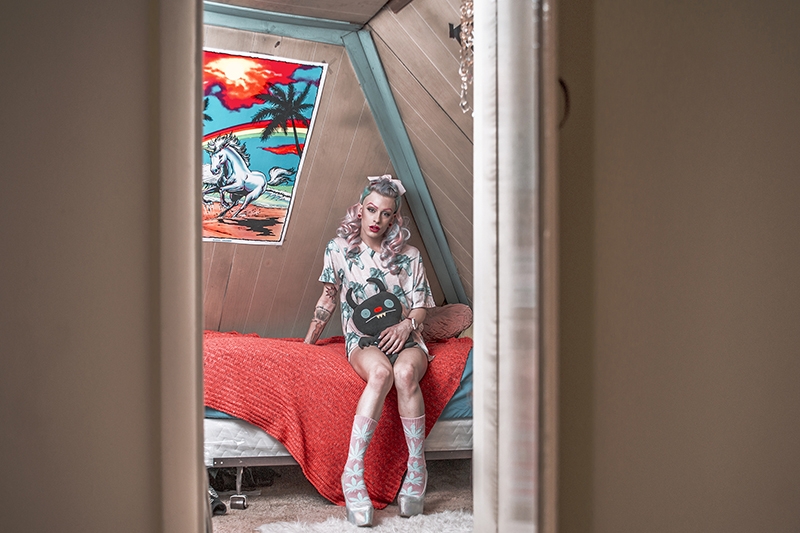 Salt Lake’s Bad Kids Collective, born from Club-Kid/Gaga fever dreams, Internet-embellished lifestyles and queer performance attitudes, has galvanized Utah drag culture in recent years. The Bad Kids, part autonomous happenings of human bodies, part multi-media selfie-installations, are cultivating a community of gender performance in Salt Lake where diverse expression reigns, where talent refers not to exclusive abilities, but rather the courage to get onstage and perform one’s artistic vision to completion. For them, every day is a drag, every body a context to apply with costume, cosmetics and ontological anarchism.
Lisa Dank was born in Ogden and, three years ago, came to Salt Lake with wide, white eyes and a Trapper Keeper full of bright, bratty personality. Dank, who prefers male pronouns in and outside of performance, was soon spotted onstage at Pure (now Hydrate) by Cartel Chameleon Fenice, who was recruiting performers for a fledgling performance collective affectionately called the Bad Kids. Though Dank was only filling in for someone that night, had only four days to prepare and was not yet old enough to visit a bar, he showed promise. “[Cartel] was like, ‘The day you turn 21, let me know,’ Dank—aka Landon Orien—tells SLUG. When the birthday came, Orien’s Lisa Dank persona was ready to captivate Metro Bar, Bad Kids HQ, with a flurry of neon, pastel and attitude. Since January of this year, Dank’s been a fixture in the collective.
As any ’90s brat might have guessed, Lisa Dank’s ‘drag’ name is a play on Lisa Frank, the beloved school supply queen, whose surreal, kawaii, animal-populated visions are embedded in the contemporary American psyche. The inflection of ‘dank’ reflects the same vision faced with the actual surrealism of contemporary society—Lisa Dank’s image is cute and light, yet subversive and playful. Orien explains it thus: “Lisa Dank is 6 years old. She was born on the Internet—she’s really obnoxious and bratty and always grounded.” Orien’s tattoos—among them: Ren & Stimpy, a slice of pizza, the title of a great Hole song, and his cotton candy aesthetic are a testament to this flippant, devil-may-care attitude. Designers such as Moschino and Jeremy Scott and performers Jeffree Star and Salt Lake’s Drew Landerman comprise some of Dank’s influences.
Despite personifying a vengeful, Lolita-inspired Daddy-killer at times, Dank makes a point to avoid saturating his performances with drama and seriousness. “I feel like a lot of people who do perform, that I’ve seen, take it so seriously and stress themselves out, and it becomes more of something they have to do, not what they want to do,” he says. Orien also says that his persona isn’t designed for pure shock value either, though the themes he explores with Lisa Dank often are received as such. Orien wants people to have fun when he’s onstage. “It’s always going to be fun,” he says, “as long as I’m being me, and not somebody else.”
Because Orien wears unconventional attire offstage as well as on, there isn’t much of a distinction between the Lisa Dank aesthetic and Orien’s daily appearance. “Lisa Dank is an amplified, more out-there version of me,” Orien says. Lisa Dank’s outfits are recycled in Orien’s daily wardrobe, and are a sign of style at Urban Outfitters, where he works. Because the lines of performance and lifestyle blur for Orien, he doesn’t consider himself to be a “drag queen,” a term that’s generally used when describing gender performers, though it refers to a specific kind of performance. “If I had to choose a title,” Orien says, “I’d call myself a ‘drag thing.’”
Lisa Dank’s tenure with the Bad Kids has been welcome—he’s a confident performer and a reliable one, often filling in at the last minute for performers who’ve dropped from a bill. “I’ve loved being with the Bad Kids because there’s no pressure to be a certain way and no pressure to look the same as everybody else,” he says. “You just kind of do whatever you want and be obnoxious and crazy and look ridiculous, and it’s not considered weird—it’s appreciated with them.”
Catch the Bad Kids at Metro Bar on Nov. 15 for Bad Kids Present: 1,000 Forms of Queer. Find the Bad Kids on the web at facebook.com/badkidsslc. Find more SLUG Creature Features here.
Photos: