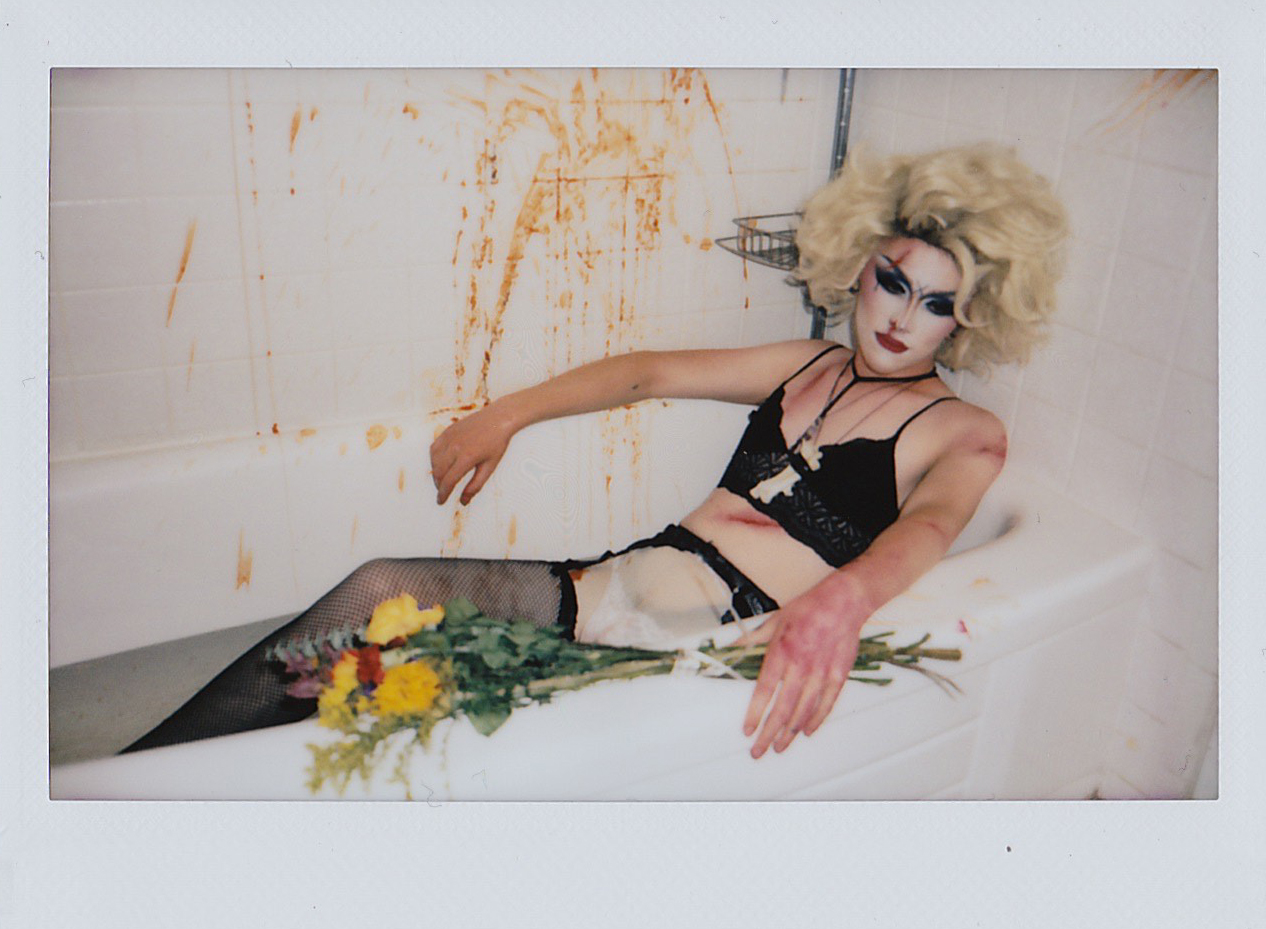 Lucy Fur, aka Nick O’Connor, is a 17-year-old, budding drag queen from West Valley, Utah. His interest in drag began after a history of experimenting with special FX makeup, followed by some friends introducing him to the competitive drag queen reality show, Rupaul’s Drag Race. It was the sixth season of the show when contestant Adore Delano stood out to him because of her ability to exist somewhere between the worlds of femininity and masculinity. That inspiration has led Lucy to discover a career path he hopes to continue in the near future.

He started putting on makeup in a feminine way, wearing wigs and lady clothing, about two years ago. Growing up, he had been called names about his appearance, and his long blonde hair always had people categorizing him as one of the girls. He’s a Capricorn, and he’s never been afraid to seek professional help for any mental issues he’s faced, which has really helped maintain his positive outlook. “I can take things I don’t necessarily like about myself and turn them into hilarious jokes I can share with people,” Lucy says. “I’ve learned that when you can make fun of yourself, it’s easier for people to relate to you.” It’s an interesting viewpoint to maintain for one so young, but it’s true. Being open to your flaws and insecurities can open you up to a world of acceptance and self-love.

Lucy claims that he isn’t a very artistic person, but his makeup looks beg to differ. His bold and clean makeup looks and drag journey have been heavily inspired and guided by some pretty well-known influencers like Lady Gaga, and have even expanded to controversial figures like the late Charles Manson. “More recently, I started actually drawing a lady character who seems to mock today’s beauty standards,” says Lucy. “She has tig ol’ bitties, a cinched-in waist and huge, pumped-up lips.” This character has inspired Lucy’s physical drag, as he’s always been drawn to the idea of mocking what most see as popular: “I don’t like capitalizing on normal, and I like thinking out of the box.” He says that there was a period of his life where he did struggle with gender identity. As a man, dressing as a woman brought up questions that he wasn’t certain of the answers. As time has passed, and as he has experienced life in—and out—of drag, he’s realized that dressing feminine makes him feel “the most like a man. When I have a bra and huge hair on, it connects me more to my masculine side.” He views the transformation as a good thing because it’s “OK feeling different. You’re not alone in this. Emphasizing your weirdness will allow people to you even more.”

Growing up in Utah was a somewhat unique experience for Lucy Fur. He had a supportive family who openly accepted his sexuality from day one. “From the womb to the tomb, I have been gay,” he says. “My mom always told me that she would support me and that there was no point in living your life suppressing yourself.” Growing up in a predominantly Mormon family, Lucy was given the space by his loved ones to thrive as whoever he wanted to be. To this day, though he’s not an active member of the Mormon church, he understands the similarities between the drag world and the popular LDS religion: “I understand the concept behind being together and believing in one thing,” he says, “but I do that with my friends and so far, it’s been just as good.”

To Lucy, drag has been an extremely important means of expression. “I’ve been dying my hair and getting wild piercings for years, and it’s always been a big part of me—to not feel scared to do what I want to do or to be who I am,” he says. As a longtime practitioner of special FX makeup, he has enjoyed blending his glam drag looks with a darker, character/theater makeup. “For me, drag is about being able to express myself,” he says, “being able to show people that I crossdress, not because I want to be a woman but because I feel most like myself when I do drag. I don’t want to be a woman. If anything, I can see the beauty in women and I want to create dynamic shapes in the body to express that [beauty].” It’s a mature concept of drag paired with a nuanced ability to traverse among masculinity and femininity, and I look forward to where he takes those ideas in the future.

At 17, Lucy hasn’t had quite as much experience with live drag performances as others, but he hasn’t let that discourage him from chasing his dreams of entering the drag community full-time in the future. He’s done some performances with the Utah Youth Pride Center, which didn’t end as desired because of his perceivably controversial looks and ideology. Since then, he’s put in the work to overcome any biases people in the community might have toward him, and continues to exhibit a sense of provisional safety and understanding—even with his seemingly intimidating drag looks. “My drag is a little more adult-themed because I have taken visual inspiration from people like Charles Manson, but I don’t want to start a new Helter-Skelter movement,” he says. “I’m not trying to make people feel unsafe by my presence.” He understands that at times, his aesthetic can come across frightening (he is, after all, named after the fallen archangel himself, Lucifer), but underneath it all, he’s a level-headed kid who wants to spark conversation and establish understanding. “Not every controversial person is attempting to cause harm,” he says. “That’s why communication is so important in the industry I’m trying to be in.”

Though he’s such a young member of the drag LGBTQ+ community, Lucy Fur hopes to start creating a name for himself now. So when the time comes when he is finally allowed on those hallowed dance floors of the clubs of SLC, the people will be more than ready for him. “I feel like drag queens are the saints of the gay community,” he confides to me. “They’re all about inspiring happiness and promoting family values, and I think I can do that for others.”

Be sure to keep an eye on this queen, as we can tell Lucy’s gonna be a shaker and a mover in our scene. Lucy Fur is hoping to set up a live performance with local queen Elliss Dee as the SLC “Acid Girls,” inspired by ’50s queens and I Love Lucy. In the meantime, follow Lucy Fur on Instagram @pvnkslvt for all his sickening looks and upcoming events. Until we can finally catch him in the clubs of Salt Lake, in the words of Lucy himself, “Don’t compromise what you think for other people—to a certain extent.” Amen, Lucy Fur. Amen.