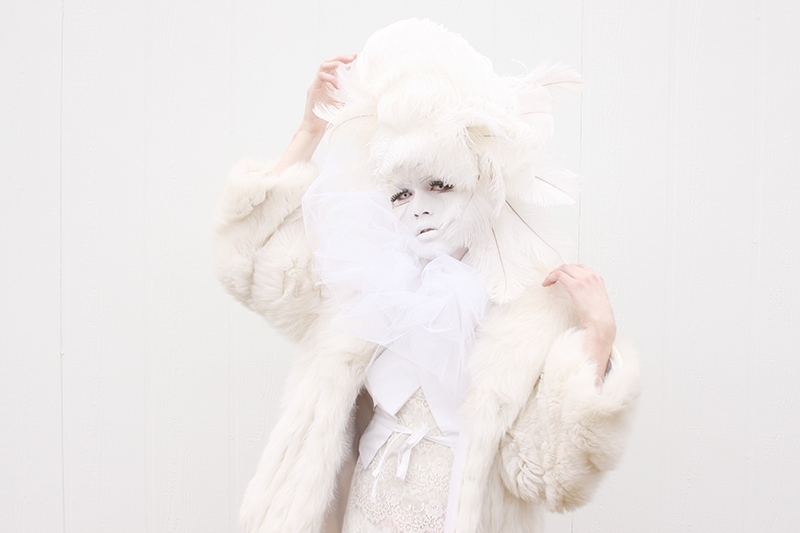 Salt Lake’s Bad Kids Collective, born from Club Kid fever dreams, Internet-embellished lifestyles and queer performance attitudes, has galvanized Utah drag culture in recent years. The Bad Kids, part autonomous happenings of human bodies, part multi-media selfie installations, are cultivating a community of gender performance in Salt Lake where diverse expression reigns, where talent refers not to exclusive abilities, but rather the courage to perform one’s artistic vision to completion. For them, every day is drag, every body a context to apply with costume, cosmetics and ontological anarchism.
No, Lukas Robin Hood wasn’t named after that Robin Hood, if that’s what you’re thinking. He’s named after his grandpa, Robin Hood (brother to “Little” John and “Maid” Marian). It seems as though humor runs in Lukas’ family—his parents are artists, and he talks about performing from an early age. “When I was little I definitely loved to dress up,” he says. “We had a little stage at our house, so we would put on little performances and things. I’ve always been a little feminine too, as a boy growing up. I’ve always been in touch with the feminine side.” Learning makeup and hair while attending cosmetology school helped Lukas to practice his aesthetic.
Lukas’ first time in drag happened about four years ago, at a Sketch Cabaret show at Bar Deluxe, with the help of local queen and former SLUG columnist Princess Kennedy, a friend of his boyfriend Aaron Michael Woods. “They were doing drag portraits, so we would stand there for a few minutes [in drag], and she asked me to be a part of it,” he says. Kennedy dressed Lukas up in the spitting image of Marilyn Monroe, a feminine look that Lukas was able to pull off flawlessly. “It was really beautiful—it felt fun,” he says. “It went from there, and extended more and more.” Lukas was under 21 at the time, and dressing in femme drag as a part of Kennedy’s entourage, the Kennedolls, could get him whisked into bars and clubs, right under bouncers’ noses. “She’s totally been that drag mom figure for me and has taught me a lot about the scene and gay history in general,” Lukas says of Kennedy.
Fast-forward a couple of years, to 2012, when Lukas began performing in drag onstage, with a fledgling group of old and new friends calling themselves the Bad Kids. Count Lukas in with the old crowd—he was involved from the start, usually dressed in bold, colorful getups and fantastic makeup. Lukas has performed in both Bad Kids pageants, during their Pride Festival performance in 2013 and at various monthly shows.
Lukas, who dresses in elaborate, Club Kid-inspired outfits offstage more often than on, wouldn’t necessarily label what he does with the term drag. “In the technical sense, I would call it drag,” he says. “But it’s more of a performance art type of thing, like a living sculpture. It’s very visual as opposed to motion [sic]. It all mixes together—the visual and the performance.” Though Lukas’ looks and outfits often incorporate traditionally feminine flairs—such as wigs, dresses, fur coats and heels—they also play with gender stereotypes; Lukas identifies as male yet dresses androgynously and at times, femme.
When asked about his inspiration for looks, which sometimes take over an hour to put together, Lukas explains that he’s not necessarily guided by political or social themes per se. “It’s more about feelings,” he says. The texture of feathers is one such example. “If I found a white feather, I try and base an all-white look [around it],” he says. Japanese Shironuri fashionista Minori, who paints her face a pale white on a daily basis, is a big influence on Lukas’ performance demeanor. Lukas often dons similar white makeup.
Color and music, too, play an important role in Lukas’s overall aesthetic. “I love to use more electronic music when I can, like Black Moth Super Rainbow—super, almost psychedelic pop music, which isn’t always the kind of Top 40 that most queens perform to,” he says. “I usually try to mirror the song that I’m performing to, at least in some way, with a color. I like to wear monochromatics, too, like all blue or all red, if something reminded me of that.”
More recently, Lukas’ has been matching outfits to his ever-changing hair color. “Colors are fun,” he says. “There’s been pink, blue, purple, then green, then yellow, but that’s usually more the bleach tones,” he says. “I had black hair for years before. I think [color] is a liberation from the past.” Right now, it’s a vibrant, pastel green, though he changes colors every four to six weeks. “I usually stay on the cool tones,” he adds. How does his hair survive all the bleaching and dyeing, one might wonder? His secret: coconut oil.
Lukas’ advice to young performers: “Be true to yourself—being liked a lot and doing shows all the time isn’t always as important. As long as you’re having an amazing time, living your fantasies—that’s all that matters. Make yourself happy before you make everybody else happy.”
Catch Lukas and the Bad Kids Collective during 6 PRESENTS : PRETTY (A Bad Kids Production) on Feb. 27. Check out Lukas’ boyfriend, Aaron Woods on the SLUG Style column this month.
Photos: