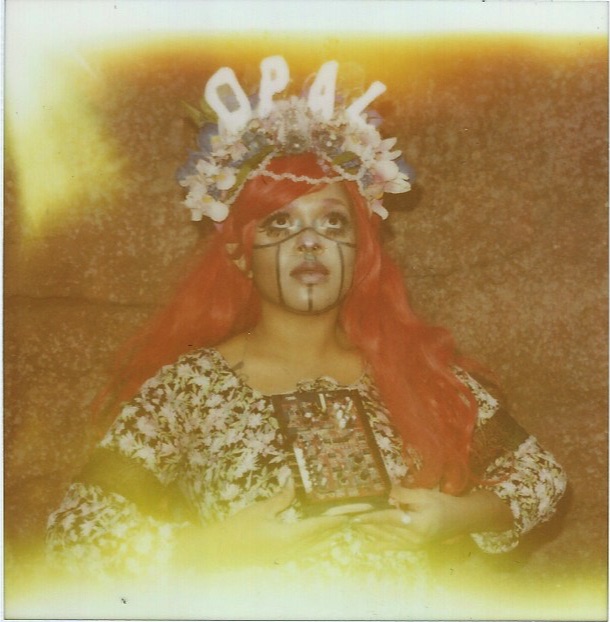 I had the pleasure of sitting down with up and coming Bad Kid Opal Ascension. Also known by friends and lovers as Frances Moondust Fishbaugh, Frances admits that their given name is Laura Ashley, but as a feminine, transgender gay man, it’s a difficult name for them to go by and one they’re in the process of changing to better fit their true identity. This quirky little daddy has brought some serious East Coast flair and space magic to the Salt Lake scene, which is just what our growing community needs during tumultuous times.

Frances is an extremely fluid individual whose genuine kindness and sweet disposition has won over the hearts of many in a relatively short amount of time. Hailing from upstate New York, born and raised in Rochester, they eventually moved to what they jokingly call a “cow town called Hilton which was basically Canada, New York.” They’ve been a resident of Salt Lake now for nearly a decade, and Frances claims, “I can feel every second. It’s definitely been a culture shock, and I still don’t know what Mormons are. I miss the New York culture … but Salt Lake definitely has its perks.”

They’ve made their way through the ranks of artistry and performance in Salt Lake. Frances used to work with Make Mind, selling tickets to hip-hop shows. They’ve also been a consistent figurehead at Salt Lake’s Fear Factory over the last few years. “I loved that place,” they say. “It was … strenuous, and it was difficult to move away from that, but the moment I did, I took the skill of acting and performing and makeup and transitioned right into drag.” They met The Bad Kid collective’s founder, Scotty Ray, at Salt Lake Comicon, and hit it off immediately after realizing that Salt Lake had exactly what they were looking for in a community.

It was then that Opal was born. In the fall of 2015, they attended their first Weirdo event at Area 51, which became the first time Frances was “out and about in drag.” When I ask how Opal’s character was created, Frances tells me in excellent specifics, “It’s as if Venus Extravaganza from the House of Extravaganza had a baby with Leigh Bowery in space, ‘cause there’s glamour on one end, and then there’s a completely a different digestion of glamour.” Their looks are simultaneously beautiful and vile, as they love transforming their cherubic face with an array of makeup, facial jewelry and anything that can be held on with glue.