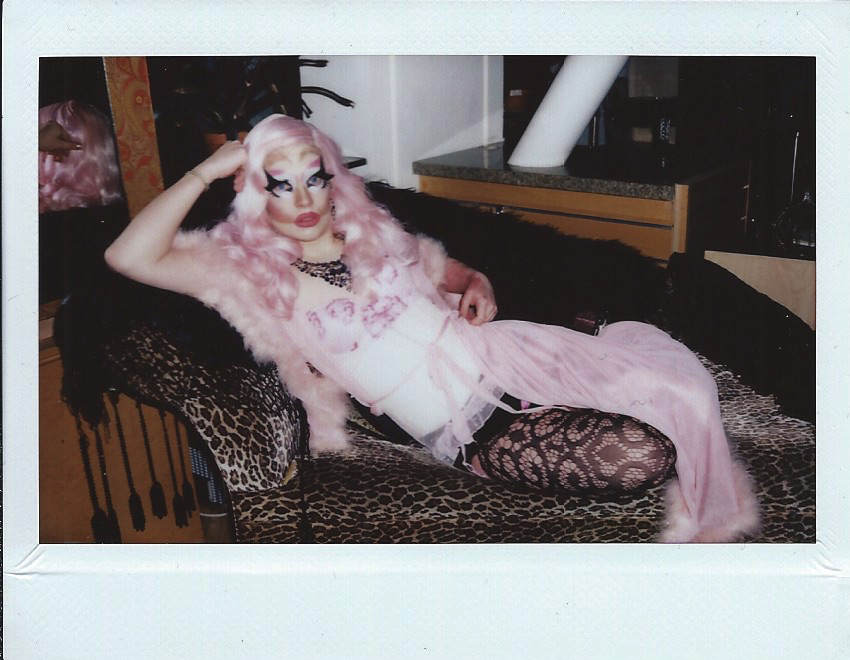 Aphrodeity (or Ryan Flowers) is a sweet, sensual, seductive siren who lures unsuspecting victims in with her charm, wit and sex appeal. Though fairly new to the drag scene, Flowers hasn’t let that slow down his enthusiasm and commitment to the craft. After Flowers had a serious accident in August that left him with second- and third-degree burns down the left side of his body, he wasn’t sure if he would ever continue pursuing his drag dreams. But with the support of his friends and fiancé, Flowers was able to rise up and use the strength he had gained through his drag persona to flaunt his imperfections and embrace them as his own.

SLUG: Tell us about yourself and where Ryan Flowers came from.
Aphrodeity: My birth name is Ryan Flowers, and I am 22 years old. I was born in Phoenix, Arizona, but I lived most of my youth in an itty-bitty town in Colorado called Canyon City, and that’s where I met my fiancé! It’s a tiny little town with more cows than people. My fiancé was actually my straight bully, but he got a crush on me and fell in love, and now we’re planning on getting married soon! Growing up, I was the weird little gay kid. I came out super young. I spent a couple years trying to cover up my own image and personality, and I spent most of my teenage years without a lot of self-confidence. Both of my parents were alcoholics, and the day I turned 18, my mom invited me to no longer live with her. It was a lot to handle, and I made a lot of mistakes during that time. I was off and on with a boy who was abusive, and I kept running back [to him]. Then I finally realized I needed to get out. But since moving to Salt Lake City, my entire self-confidence has made a complete 180.

SLUG: How did you get into doing drag?
Aphrodeity: I wasn’t raised with the best support system, but I always wanted to do performance-based things. I got the chance at 19 to perform a gig around Colorado doing stand-up comedy. I’d known about drag for years, but in my early teens, I thought it was really weird and I didn’t like it. Then I watched the movie To Wong Foo and I fell in love. After moving to Salt Lake, I bought a wig and went down to Decades, got a dress and promised myself I would do drag as soon as I turned 21. Then I met The Harlot, who [told me] that if I wanted to do it, I should show up at the club, in drag, on a specific day and just perform. I had no idea what I was doing, but I watched tutorials and threw it together. It looked horrible, but I showed up, and ever since then, I’ve kept going and I haven’t stopped!

SLUG: What kind of character is Aphrodeity?
Aphrodeity: From the neck up, she is every kindergartener’s paint-by-numbers picture, since I look like a kids coloring book—or a burned up Bratz Doll! From the neck down, I’m every straight guy’s fantasy of a vixen in lingerie.

SLUG: How has your personal/drag aesthetic progressed since then?
Aphrodeity: The makeup is SO much better. I genuinely take my time, and I’ve learned a lot of techniques from my sisters in the city. It also took a few of the not-so-nice people around telling me I should quit drag to realize that I was going to get better. Now, I’ve created a fully realized aesthetic for myself, and I’m so much better of an entertainer, makeup artist and costumer, and I’ve grown to be such a better drag queen. It’s just taken effort and time and a lot of money. She’s very burlesque and pinup and fun. My face is so cartoony, and I want you to remember it.

SLUG: I know you recently got a severe burn injury that affects basically half of your upper body. How are you able to continue being such a positive public figure and confident body queen?
Aphrodeity: It took a lot of emotional response to do it. Initially, I wanted to quit drag. Then I thought about changing my aesthetic and not showing so much body, but then I was pushed by so many of my drag friends that … it can still be inspiring.  The reason I started doing the burlesque form of drag was because I wanted to show people how beautiful the human body is. And after this injury, I still want to show people how beautiful the human body is, even with flaws. If I’m able to get on a stage and take my bra and panties off, and people are able to see every inch of my burned body, it’s a magical thing.

SLUG: What do you want your performances to accomplish?
Aphrodeity: For a long time, I couldn’t stand my body and the way I looked. And after a massive rework, I completely edited my own persona—as Ryan, not just as Aphrodeity. I wanted to show there was nothing for me or anyone else to be ashamed of about their bodies. The first time I took my clothes off onstage, I realized people loved it, and there was nothing to be scared of.

SLUG: So what encourages you to continue doing drag?
Aphrodeity: I think that now it’s ingrained in who I am as a person. If I stopped, I’d probably become a sociopath. And Aphrodeity is slowly melding her way into Ryan. I don’t think my support system here in Salt Lake would allow me to stop anyway. I’ve had very few times in my life where I’ve done something that’s gotten such an amazing response from people. Plus, I don’t want to work a boring office job, and I want this as a career. I want to be someone that 13-year-old me could have seen and looked up to.

SLUG: What do you offer the world of drag that it is currently lacking?
Aphrodeity: Compassion. There are a lot of entertainers who do their number, pick up their booking fee and are offstage before last call. But anytime anyone wants to interact with me, I am there for it. A lot of people who want to do drag aren’t your typical white, twink, gay boy who gets 600 likes on Instagram just for farting. My performances are supposed to be talked about, whether negative or positive. I don’t wear breasts or pad, so the body is a very genderfluid thing for me, and I want it to create a dialogue about beauty in men, women and nonbinary people.

SLUG: What would you say is the loudest message you want the baby queens watching you to hear?
Aphrodeity: Don’t let some bitch that lines her lips with a sharpie tell you that you can’t do drag.

You can catch Aphrodeity at the upcoming, highly anticipated performance for RuPaul Drag Race alumni Peppermint on Dec. 2 at Metro Music Hall. She can also be seen at Club Jam Saturday nights, with the Haven of Hues at Metro, or at Weirdo at Area 51. You can also score some super cute Aphrodeity merch at bricksgaystuff.com/aphrodeity and keep up to date with this inspiring queen on Facebook, @Ryan Flowers (Aphrodeity), or on Instagram, @theonlyaphrodeity.