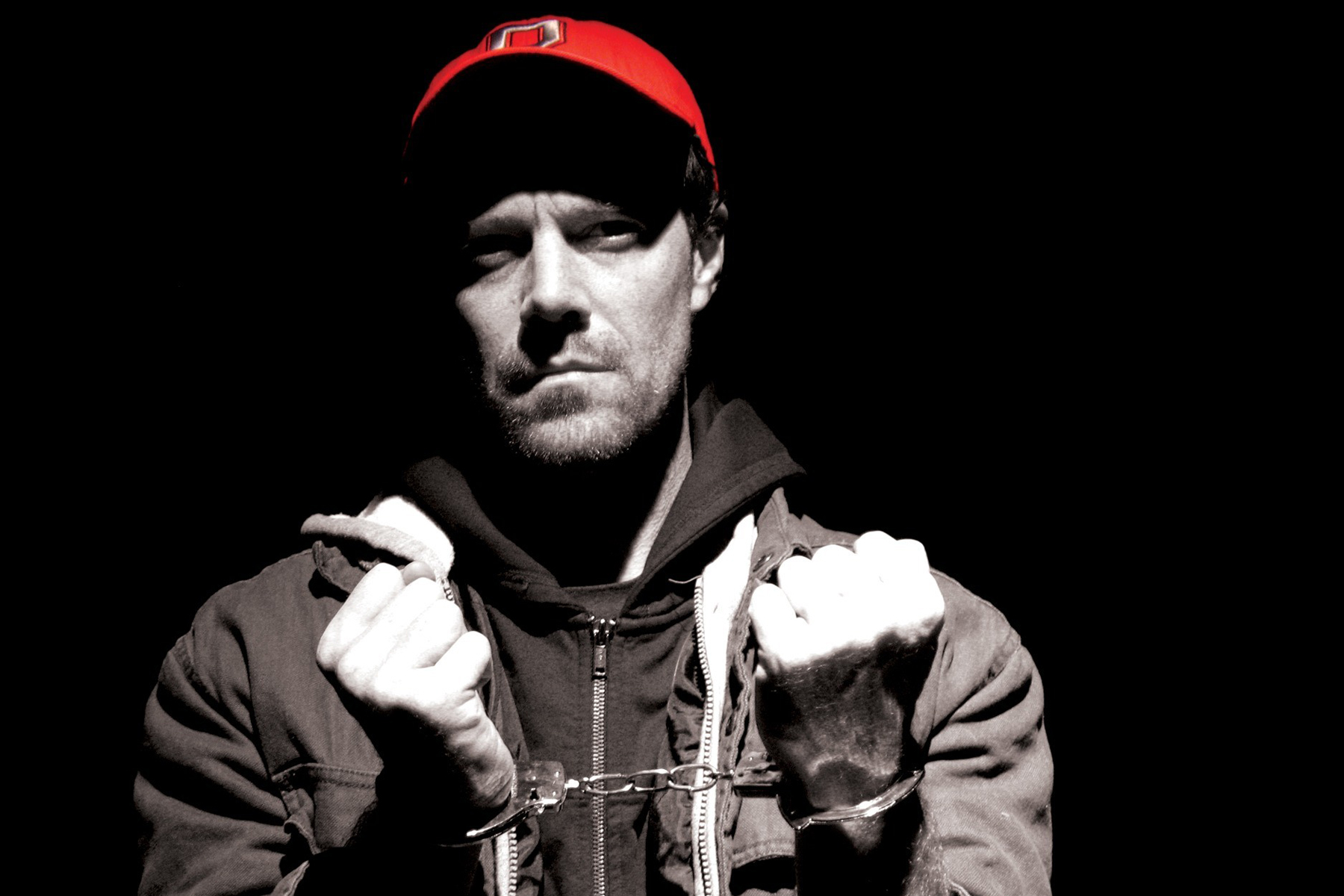 My guest and I sat in an auditorium on the sixth floor of the Huntsman Cancer Institute, surrounded by doctors and theatre-goers alike, waiting in anticipation for Mercy Killers to begin. I’d never been in a medical institute for the purposes of a play, which intrigued my interests even more. For minutes, the crowd around us chattered about the potential stories this play could hold. Regardless of how long my guest and I pondered the possibilities, Mercy Killers (directed by Tom Oppenheim) is a play filled with a vast amount of pain, sorrow and a cry for social change that neither of us could have ever expected. The lights dim as the lyrics to “This Land is Your Land” and police sirens echo across the small auditorium. Blue-and-red flashing lights illuminate the stage, which holds a foldable chair, a black table and a hunched-over man wearing a dirty winter jacket, greased up jeans, a trucker hat and a cast over his wrist. Our protagonist, Joe, played by performer and playwright Michael Milligan, sits down and begins talking to the police—the audience—about the facts surrounding an incident involving his wife. He insists he must start from the beginning of his wife’s disease in order to give proper evidence. “This is my life, so details are important,” he says to us, anger and guilt filling his eyes. 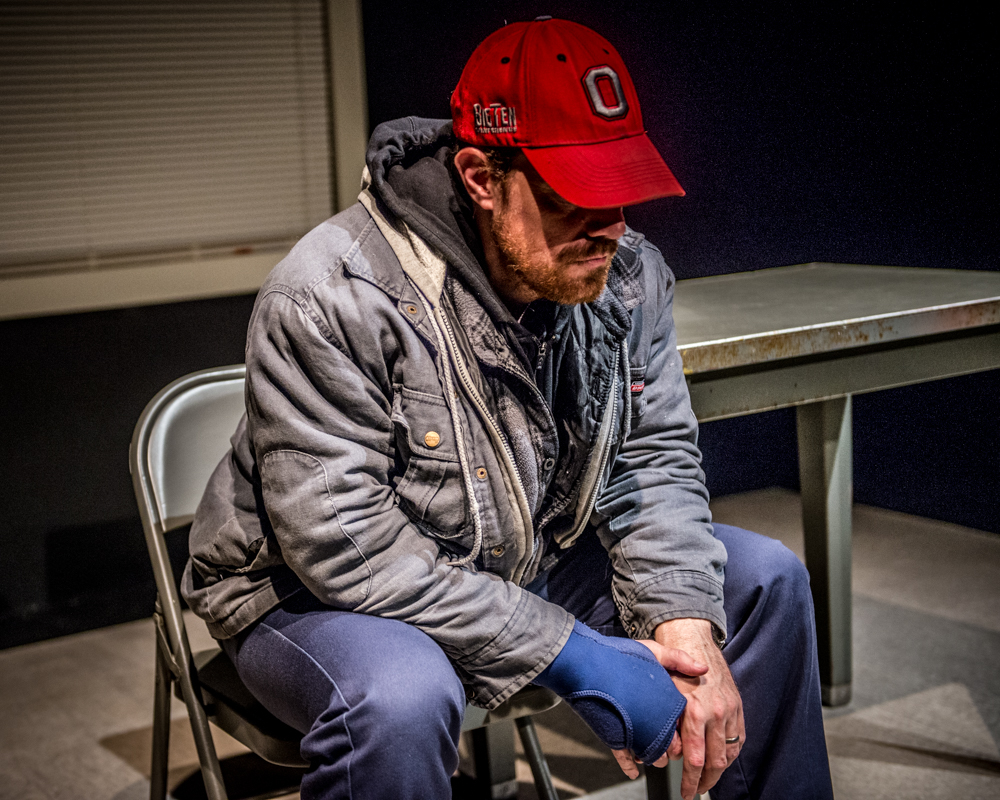 The following hour reveals the love that Joe had for his wife, their adventures together and her free-hippie spirit. It also reveals the consequences that a person in this country faces for simply having a disease like cancer. This average “Joe” carries out a powerful story that demonstrates both how easy it is to find oneself in his wife’s situation—sick or wounded—and how easy it is to be in his, filled with guilt, fear and the ambition to pursue a cure for his wife’s disease. As Joe’s relationship and life begin to crumble, we see the corruptions in our medical care system that fill the pockets of doctors and pharmaceutical companies: “I’m sorry, my lousy pockets ain’t deep. Bills coming back are as scary as the surgery.” Joe demonstrates that our healthcare system in America screams that we, as citizens, are responsible for our health; as if there is some way we should be able to either a) control the diseases within us or b) have the ability to pay up to millions of dollars for proper health care. Over and over, our protagonist pleads, “I just couldn’t fix it,” as though his wife’s suffering were somehow his fault. “I know—I know. It’s a dog-eat-dog world,” he says, “’cept I ain’t never seen a dog eating a dog. Just people.”

Mercy Killers isn’t simply a call to action concerning our healthcare system. It also questions whether or not we should still believe in the American Dream, which has been indoctrinated into us from a young age. Joe is a strong, right-winged individual who has been honest to the logic of the American Dream and the “benefits” that one can recieve from pursuing it. However, this play demonstrates that even someone who has followed all the rules properly can be swept under the rug by our healthcare system.

At first, Joe is perceived by us as a “mad man.” He is quick to anger, stares for long periods of time into space, and goes on long tangents, quickly forgetting the track he was currently on. He breaks out into modes of violence and refers to his cast as he apologizes to the police for punching the man in the ambulance. However, as his story is peeled back layer by layer, we begin to understand that Joe’s actions could be any of ours, should we share a similar journey. His angry, tear-filled eyes matched mine by the end of the night. When the lights gathered themselves onto the stage again and Mercy Killers finished, the audience stood for an ovation.

My guest and I were lucky to attend a post-show discussion following Mercy Killers for a Q&A with Michael Milligan and Dr. Gretchen Case as moderator. Milligan discussed his experiences in life that led him to writing and performing such a powerful and contradictory piece in front of medical professionals, students and legislatures. After sharing three short inspiring stories with us, he said, “We have to cost benefit [in America], to see if we need the treatment.” With regard to those who lack health insurance, Michael says, “Not only do you deal with physical pain, but also the emotional and sometimes existential anguish of not knowing when you’ll get help.”

Many audience members asked the doctors specific questions about changes to our healthcare system. Would a single-payer insurance solve this problem? What would be the effects of implementing a socialist healthcare system? What do we do for our senior citizens? Michael offered an example of a man who needed an arm surgery and he traveled to each established country in search of the best way to solve his problem and give him the healthcare he needed. Michael says, “[America needs] to look around and realize this is not working.” One anonymous audience member made an excellent statement that highlighted the main theme of Mercy Killers: “Healthcare is not a civil right in this country; it is a marketable commodity.”

Michael Milligan has Mercy Killers available to view on his website as well as his performance schedule. I would recommend this play to absolutely everyone. Our health, as humans, is crucial to living a productive and happy life. In my view, denying access to doctors, medicine, needed surgeries, etc., should be considered a crime—not an opportunity to commodify a human right.