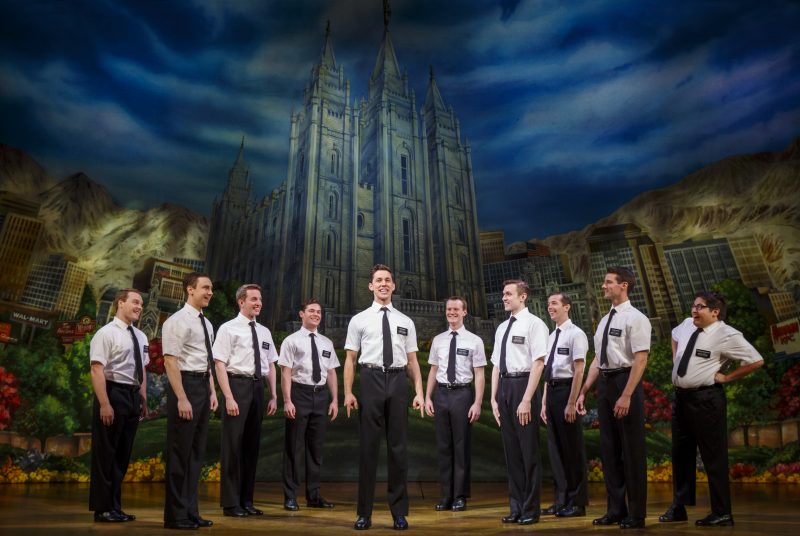 The Book of Mormon. Photo courtesy of Joan Marcus (2017)

The “All-American Prophet”: Eccles Theatre Brings The Book of Mormon Back to the Utah Stage

I’ve seen The Book of Mormon musical two times: the first in London, the second, Salt Lake City. Let me tell you—seeing this particular musical in Utah was 10 times better. For those of you unfamiliar with The Book of Mormon, it’s a hilarious farce written by the creators of South Park about two LDS missionaries—Elder Kevin Price (played by Gabe Gibbs) and Elder Arnold Cunningham (Conner Peirson)—who serve their missions in northern Uganda, where the villagers are being terrorized by their local warlord, General Butt-Fucking Naked (Oge Agulué). Despite Elder Price’s exuberant amount of pride and selfishness and Elder Cunningham being a pathological liar, the two missionaries make it their goal to save the village by converting them to the Church of Jesus Christ of Latter-Day Saints. Its second time in Utah, The Book of Mormon gains the stage once more, running through Aug. 20 at the Eccles Theater.

There truly is a stark difference when you watch The Book of Mormon with people outside of Utah as opposed to watching it with the locals. In proper Utah fashion, one downside to the show was the exclusion of alcohol due to the Deadpool ruling—that is, Utah doesn’t allow alcohol to be consumed during any performance that depicts sexual acts. This, however, did not stop patrons from pounding a beer or hitting the bars before the show began. And with that, the audience was already off to a great start for the evening’s musical masterpiece. The night of the performance, Eccles Theater was practically shaking with the volume of laughter, cat-calls and cheering from the rowdy local crowd, adding energy and excitement to each progressive scene. Whether it was singing along to Elder Price’s “Orlando” dreams or recognizing the typically underappreciated Utah jokes, everyone in the theater became an important part of the production through audience interaction.

Within the musical’s crude humor is an admirable amount of callouts that specifically pertain to the culture of Utah. “Turn It Off” is a song that earned bellows of laughter from the audience, but it also touches on the fact that LGBTQ individuals within the LDS church are often faced with “turning off” their queer side or being excommunicated for simply being themselves. “Man Up” is a humorous critique on toxic masculinity featuring Elder Cunningham. Peirson fiercely took the stage, loudly singing, “Man up,” while sashaying his hips across a set of fireworks and glitter. One of my favorite songs is “Spooky Mormon Hell Dream,” featuring Elder Price as he faces the demons in his dream: a giant, winged Satan, Jeffrey Dahmer and Starbucks coffee. Each theme in the play, including white privilege, female genital mutilation and religious whitewashing are mentioned and discussed through the lens of dark humor.

I must give a shout-out to Myha’la Herrold who played Nabulungi. A flawless performance, Herrold brought out the bright-eyed innocence in Nabulungi, making “Baptize Me”—a duet between Nabulungi and Elder Cunningham about baptism that heavily alludes to losing one’s virginity—all the more comical. “Sal Tlay Ka Siti” showcased Herrold’s stunning and mesmerizing vocals and was one of the few moments where the laughter subsided so that the audience could simply listen and appreciate the music. Nabulungi also has moments that are devoid of comedy, which is replaced by raw emotion, and Herrold reflects this well. Nabulungi’s father, Mafala (Sterling Jarvis), has real and powerful moments like this with his daughter, too, despite his entrance being “Hasa Diga Eebowai”—a phrase whose meaning can only be truly experienced at the show itself.

The best part about watching The Book of Mormon musical in Utah is being able to see locals from every walk of life—members of the LDS Church, ex-Mormons, counterculture punks, drag queens and more—sit together, watch a musical and laugh at even the smallest jokes that only Utahns can truly appreciate. Other than the annoying liquor laws, I didn’t notice any adversary to the production, especially considering that it takes place Downtown in close proximity to the Salt Lake Temple itself. I mean, hell, even the LDS Church had an ad in the program. And not only was the audience mostly local; locals took to the stage as well, adding a bit of Beehive talent to Utah’s most famous comedy. (I see you, Jaron Barney!)

Seeing The Book of Mormon in Salt Lake City was truly “something incredible.” The show is clever, it’s crude, and it certainly is one of my favorite musicals to date. Not to mention, if you’re lucky, the catchy soundtrack will be stuck in your head for days. If you have the chance to see this talented group of performers in a should-not-be-missed production, do it. The Book of Mormon runs at the Eccles Theater until Aug. 20. You can find tickets and more information at eccles.theatersaltlakecity.com.