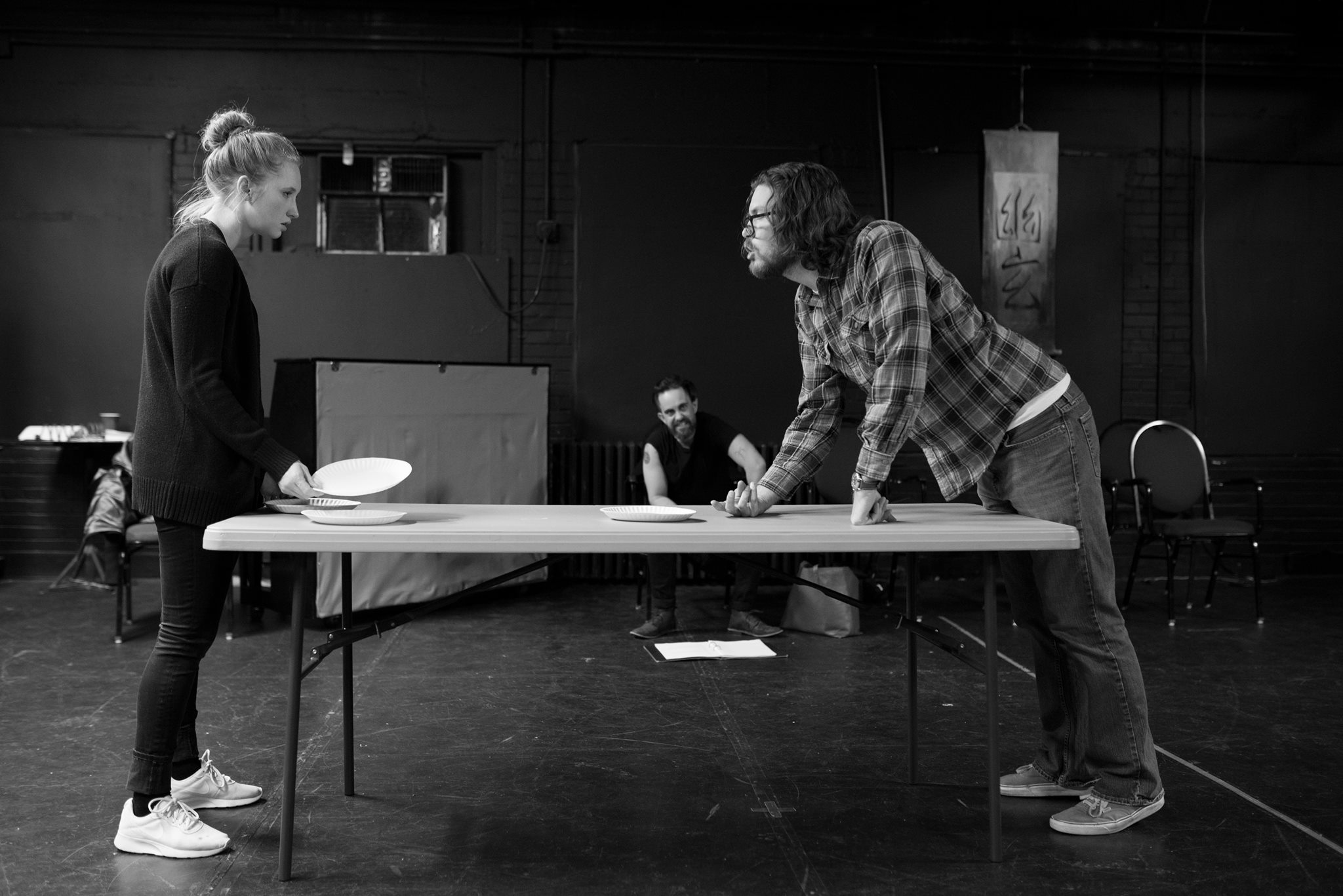 U.K.-based Riot Act Theatre is an immersive, exploding company that breathes life into classic or forgotten texts. Aiming to be the “conduit for necessary truth and creation of new forms,” Riot Act produces plays from the past that still reveal modern-day issues and inescapable human truths. Whit Hertford, American-born artistic director and founder of Riot Act, has written Poor Bastard to be non-traditionally staged in the basement of the CUAC gallery in downtown Salt Lake City. Hertford is known for his brilliant written and/or staged adaptations, including Spoilt Fruits, Lunatic (based off Bram Stoker’s Dracula) and The Seagull. Poor Bastard examines Ivan Nicholas, a man whose life was once full of promise and joy, but who has fallen into a deep depression due to aging, numerous failures in life and the dark tragedy of the American healthcare system. This comedy, set in rural America, is available to view until Jan. 28 and is definitely one production you won’t want to miss.

SLUG: Poor Bastard is not only an adaptation of Anton Chekhov’s first play, Ivanov, but it is also about a man falling into a midlife crisis. What inspired you to adapt this specific play?
Whit Hertford: I spent a period of my graduate theatre directing studies at the Russian Academy of Theatre Arts (GITIS) in Moscow specifically dissecting Chekhov’s plays. And this thing has always nagged at me: I’d read his plays and they read funnier and more current than any production I had seen in the U.S. or U.K., and I wondered why. His plays are darkly funny, layered, richly complex and capture the human spirit, in my opinion, more fully than any other playwright. A lot of odd quirks to his plays I adore and felt a kinship to. His plays speak to my inner soul more than anything else. He’s an acquired taste and has a particular style, but not unlike Wes Anderson, he is able to brilliantly build stories and characters that are neither easily defined as just comedy or tragedy. And that’s always in my opinion the best, the hybrid. So, whilst in Moscow I nervously shared my theories and ideas for his plays with my Russian tutor, Vladamir Baicher (a very intimidating man). I explained and outlined how I wanted to radically adapt and direct them, sometimes cutting half of the speeches or condensing 14 characters into eight. I was sweating—[I] wanted his approval to mess with it. He cracked a smile and simply said, “This is right. Go do this.” I got home and quickly adapted my versions of The Seagull and The Cherry Orchard and established my brand of Chekhov, which is more of a resuscitation than an overhaul. I scraped away layers of gaudy restoration paint that clung to archaic performance history and tried to get back to the initial sketch of the story.

SLUG: In your director’s note, you mention how this production is critically relevant to modern-day America. What are the themes in Poor Bastard, or even in Ivanov, that you believe are relevant to rural America, where the play is set? And why did you and your company decide to produce the play in Salt Lake City, specifically?
Hertford: Whilst reading Ivanov in Moscow, I immediately felt it was quite American in nature. It centers around a man during his midlife crisis who was once very successful and then lost it all. He’s struggling with his community and world changing; he’s in massive debt, questions religion, his marriage; [he] hates getting older [and] wonders what his place is in the world. Many people in the U.S. have those same questions and struggles right now—and especially in a place like Utah. At the root of Chekhov are stories about: families, the gnawing annoyance of being bored with life (mundane existence) and love—all things very “Utah.” And so once I had that realization, the adaptation went very quickly and wrote itself. I knew the absolutely perfect batch of actors that were also in Utah, and so it felt very fateful to rush and do it (or “Russian” do it?—I’m sorry).

SLUG: Poor Bastard will be non-traditionally staged in the basement of CUAC (Central Utah Art Center). CUAC is also showing two new exhibitions during the times of your production. How does the exhibition at CUAC add to your performance? What is the benefit of hosting your production in a non-traditional space?
Hertford: The idea of performing in a non-traditional space like CUAC‘s basement is just that: It’s not normal. I wanted it to feel totally new to walk into a Riot Act performance. I want theatre that feels like going to see a band play. It’s gritty and based solely out of passion and ingenuity—not predicated on how much money can be thrown into a show or run by champagne-swirling yuppies. SLC has always had a thriving music, dance, fine arts, film, culinary community. But theatre in Utah is, and for decades in this city, polarizing. It’s either based in something very presentational and false, like most musical theatre, or it’s being run by archaic institutions that do not have a finger on the pulse of people under the age of 61 (the factual median age of audience members at Pioneer Theatre Company). And so most people between the ages of 18 and 35 in this state rightly feel that better stories are being told on Netflix, and they don’t have to leave their house for that. I see theatre in London (where I’ve been based for the past three years), Berlin and Amsterdam that is just as gripping and edgy and provocative as U.S. television. And I think that can be in the same in the U.S.—but we have to not be afraid of offending. Tell the best story you can and they will come. It’s not rocket science. It just takes guts and a healthy dose of crazy.

SLUG: New plays always have their ups and downs during the writing and rehearsal processes. What has been your greatest triumph with the play so far? What makes you the most excited about producing this play?
Hertford: The greatest success with this play is that it’s been a real family created between the cast and crew. We’ve watched each other grow and every one of these actors has been trusting, vulnerable and challenged themselves. It’s been wholly collaborative. There [have[ been no attitudes or compromises. It’s been revolutionary in that it’s been our little secret and so for the audiences to so far really “get it” has been a triumph. They see what we aimed to do, and because we dug deep to do it from an honest and communal place, it resonates. I am not an apathetic director. [I don’t] resign myself to sit behind a desk and shout orders; I get in there and work with them. I have to be willing to open myself up if I’m going to ask my actors to. And I think this type of theatre has now become infectious amongst us all.

SLUG: As someone deeply obsessed with Chekhovian theatre, I am always interested in comedic adaptations of Chekhov’s plays. What is it that led you to writing a comedic version of Ivanov as opposed to continuing with tragedy?
Hertford: All of Chekhov’s plays are neither purely comedic or dramatic. That’s a thing academics created to give it a simple definition. But it was never Chekhov’s intention. The Seagull was first directed by Stanislavski, and Chekhov saw it and was horrified that he had made it into a melodrama. He chastised the director for putting a mood where there wasn’t a mood, which is what has then been the case for decades and decades when most U.S. and U.K. companies do his plays. They don’t read between the lines. Chekhov is innately funny, but it’s a smart funny—not a farce or pantomime. It’s closer to Wes Anderson and the Coen brothers or the U.K. version of The Office. Within the original play is something hilarious, awkward, beautiful, raw and heartbreaking: a genre-less writer.

SLUG: Will Riot Act be bringing Poor Bastard to any other U.S. cities or towns? What is next on the agenda for your company?
Hertford: I would love to take the play elsewhere and am currently directing plays of mine that I hope someday get published and can be done by anyone, anywhere.  Riot Act is based in London currently, and we go back and forth and are soaking up the theatre of Western Europe currently. However, because I feel that Shakespeare is seen and done quite predictably here in the States, I am keen to shake the cage a little and do something insane. So, I’m in the beginning stages of trying to bring a large immersive/found-space Shakespearean adaptation to SLC this spring. On paper, its scope and size terrify me, but I think it’s time. SLC needs bold moves to offset the patriarchy and rigidity that mutes and muffles. I believe these classic plays have a powerful way to be a conduit to introspection, healing and to bolster cities and communities. That’s the type of theatre I want to do—something that matters.

SLUG: Poor Bastard examines the mundane, the tragedy of cyclical life and the unfortunate health issues that come with simply being human and aging. What are the benefits of examining all these issues through the lens of comedy? In your opinion, does comedy leave a greater emotional impact than tragedy, and why?
Hertford: Yes, I think comedy is the release valve that allows for taboo and touchy subjects to be approached and investigated.

SLUG: I greatly admire that you and your company breathe life into classic texts that may have been forgotten. What ultimately led you to adaptation? Are there any classic texts that you are currently considering for future adaptation? If so, what are they?
Hertford: We have to adapt these works as well as writing new plays. They are not mutually exclusive. Both have value. But I believe strongly that if we lose sight and feed into a rank fear of being bored and not producing these classic plays through new prisms, we are failing younger audiences and creating a very homogenized future generation of artists. That cannot happen. I want to adapt much more Ibsen, Strindberg and the Greeks—and am dying to get the nerve to finally find the right variables to try my hand at Beckett. There are current classic playwrights that get overlooked, too: Martin McDonagh, Enda Walsh, Simon Stephens—all of which I want to direct someday—but I also have a few more original plays circling about that I hope to find time for.

SLUG: It seems to me that Chekhovian theatre typically ends with a stark, if not startling, thematic lesson. What is, for you, the ultimate takeaway point of Poor Bastard?
Hertford: Poor Bastard is about a group of people that are unsatisfied with their lives. They are stuck in a town that has changed from being prosperous to bleak and depressing. The main character, Ivan, is a man who wants to be happier and find purpose—universal themes. [He] realizes that being happy is the main goal and is desperate to find it. To seek happiness, to embark on that journey, sometimes through change or relief, is what existence is all about. Guilt, fear and anger are the true cancers of human existence, and life is a trek to weed those out.

Poor Bastard shows at CUAC on Jan. 27 and 28 at 7:30 p.m. For more information, visit riotacttheatre.tumblr.com.