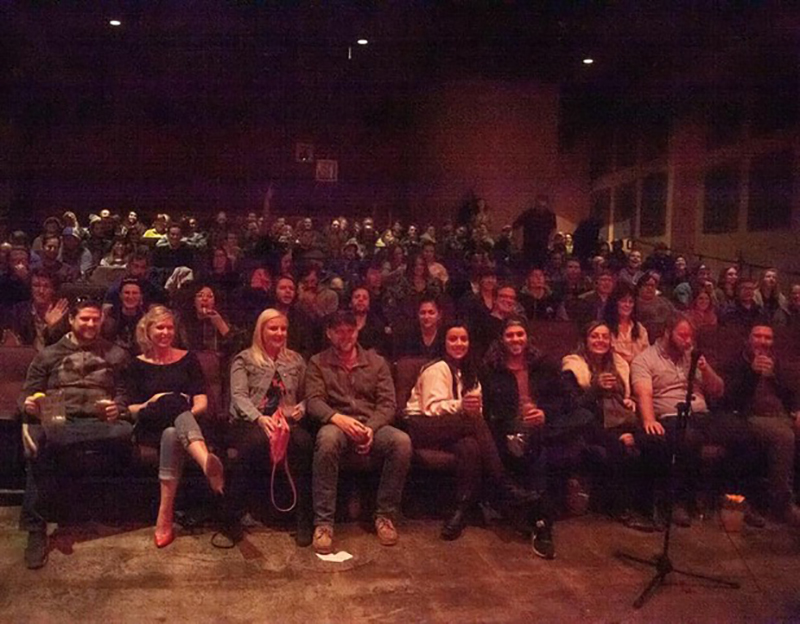 It’s unlikely that anyone would think of adding “drunkenly watching your favorite movies while comedians make fun of them” to a list of things that could happen in Salt Lake City, but that should forever be at the top of every local’s go-tos. It’s true that somewhere within the all of the odd rules, Zion curtains, and family-friendly theaters, there exists an oasis of cult film, boozy drinks and comedy. That beacon in the dark is the Front Row Film Roast at Brewvies.

This once a month comedy gem can only take place at the infamous Downtown haven that is Brewvies. Where the funny folks from Crowdsourced Comedy take over the theater to provide banter, nostalgia and drinking game entertainment. In the past, no film has been too loved to roast. They have skewered everything from Jurassic Park to Harry Potter to Love Actually. This roast round, they are unleashing on a movie dripping with millenial nostalgia, 10 Things I Hate About You. It’s going to be boy (Heath Ledger) meets girl (Julia Stiles) meets Shakespeare (The Taming of the Shrew) with a 1999 pop culture twist and dick jokes—lots of dick jokes.

“We always have a local guest comedian, a drinking game, it’s just a fun time.”

“We love rom-coms,” says Andrew Sproge. “I don’t know what you would call this, a teen rom-com?” The teen staple from 1999 has become a favorite for many as a modern remake of The Taming of the Shrew. “I think this is a good movie,” Andrew Sproge says. “Obviously we love Heath Ledger, so we couldn’t pass it up.” This is the first movie that put Ledger on the map for US audiences. “It’s very roastable.”

“You don’t see a lot of characters like her [Julia Stiles’ Cat Stratford], especially for that time,” says Rothenberg. “I just watched the movie. I hadn’t seen it before. Now I’m excited to make jokes about it.”

Roaster Jessica Sproge has skewered Rom Coms in the past with much delight. “I studied Shakespeare in college and high school, so I know Taming of the Shrew better than I do this,” she says. “It’s mostly watching and seeing the blatant Shakespeare references.” For those who have never seen the movie, like her, they are in for a hidden treat. “It was fun to watch. I love late-’90s [and] early-2000s movies, they are really fun to watch.”

The layout of the show is similar to other Crowdsourced Comedy events, which means it is heavy on audience participation. “We always have a local guest comedian, a drinking game, it’s just a fun time,” says Kelley. “The whole idea is to deliver the experience of watching one of your favorite movies on the big screen with some of the funniest people you’ve ever met, i.e. us.”

“One of my favorite moments was during Space Jam. We had this dunk contest.”

Sorensen explains the basics and says, “If you come to the film roast, this is what you can expect: You’re going to see a movie and we’re going to have a drinking game. You’re going to see it roasted by comedians and then usually we encourage people—if you want—to dress up. It’s not a requirement, but if you want,” he says, heavily hinting at the suggestion of late-’90s teen angst attire. “We’ve done a whole array of different movies. We’ve done rom-coms, we just did Jurassic Park, we’ve done Harry Potter, The Matrix and Labyrinth. Last year we did Independence Day,” he adds. “Nothing’s out of reach with the film roast.” They are aiming to connect on a personal level with the die-hard fans of the movies. “One of our biggest shows was Labyrinth. Not because it’s a good movie, it’s because we love David Bowie. People dressed up at the show as Ziggy Stardust and in other David Bowie outfits,” Sorensen muses.

At the roast of Harry Potter they sorted the audience members. Sorensen and Kelley would have them come up and riff on them, their looks, and their demeanor. “Instead of sorting them into a Harry Potter house it would be like ‘Kardashian she is!’ or ‘Republican!’ That was one of my favorites,” laughs Sorensen, who still owns the sorting hat.

Kelley talks about the audience participation on a past show, “One of my favorite moments was during Space Jam. We had this dunk contest.” Audience members were asked to come to the front to demonstrate their best slow motion dunk. “People were super creative. I’ve watched basketball my whole life and I saw some things that I don’t think would’ve been created outside of that venue,” Kelley says.

“[Brewvies is] literally the only place in Salt Lake City where this could happen. It’s such a unique thing.”

To begin with, Brewvies is the perfect home for a twist on the film experience, and adding the monthly Front Row Film Roast for SLC screenings is a one-of-a-kind experience that only happens live. “It’s obviously very adult-oriented. It’s a bar, you have to be 21 to get in, so that already sets the tone for what it is that we’re doing,” explains Andrew Sproge. “We encourage people to drink responsibly. We have got deals with Lyft to get home. It’s literally the only place in Salt Lake City where this could happen. It’s such a unique thing.” This is an event that you will not want to miss. “It is full of hot quotes, hot bods and hot Shakespeare,” says Andrew Sproge.

So, if you are ready to break out your black panties or are just merely “whelmed”, get to Brewvies August 24th early enough to snag some of their amazing food and drinks, play a little pool, and then settle in to have all of your teenage memories dashed by the Front Row Film Roasters. The film and roast starts at 9:00 PM and tickets can be purchased online or at the door for $12. The day of the show there is a ticket give away on their social media, where fans can comment on a post and a winner will be selected at random.

Front Row Film Roast is sponsored by Utah’s own Bohemian Brewery. You can check out more about Front Row Film Roast on Facebook, Instagram and Twitter. The show price is $12 on frontrowfilmroast.com or at the door. Order early, as the show may sell out. Show starts at 9:00 p.m. on Aug. 24.