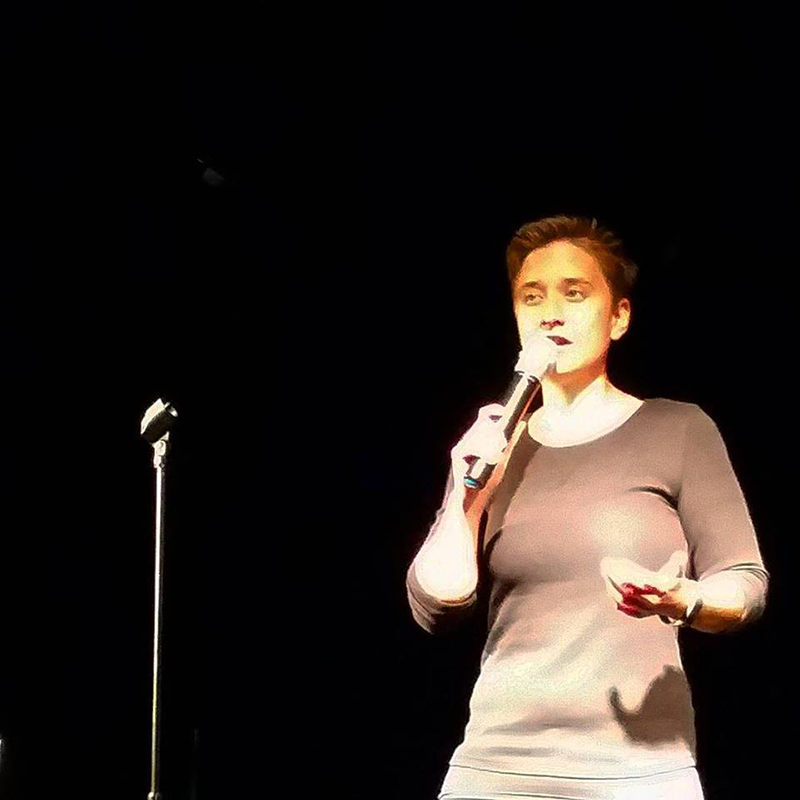 The name says it all. Fridays just got a whole lot funnier for those of us in the valley. Recurring at Sandy Station off of 90th South, Funny Fridays features a revolving cast of local comedians with a smattering of special guests. The show was started by a group of ambitious comedians: Natashia Mower, Jason Harvey, Christopher Stephenson, Troy Taylor and Andrew Jensen. Doug Evans generously gave them the room at Sandy Station for a Friday show in order to make it more conducive to comedy. They’ve taken the concept of having a place for strong comedians to perform in front of an audience looking for entertainment on a Friday night, and they booked only the best of the best. This installment of Funny Fridays featured Shayne Smith as the opening act, Andrew Jensen and headliner Natashia Mower, with Troy Taylor on hosting duty.

Taylor started out the show strong. As one half of the improv duo Toy Soup, he has a finely honed talent of physical comedy and hilarious impressions. He started off the night by beat boxing and a little observation about what happens when he listens to music in his car. His slow and methodical pantomiming of toilet seat covers during his bit about toilet seat etiquette had the audience snickering in anticipation for the next tear of that crinkly paper. Since the show is brought to us in a fully functional bar with a long drink menu, Taylor offered to buy someone a drink if they could win “Guess this Movie.” His impressions of several characters in The Green Mile were spot on, and the entire audience was competing for the prize, with one lucky gentleman getting it on the first try.

Taylor then brought Shayne Smith to the stage. Smith is one of the newest comedians to hit the scene running after starting under a year ago and taking on comedy at full speed. He let us know that he’s about 90 percent sure that his co-worker thinks he’s an evil wizard. Smith, who’s covered in tattoos, incorporates this into his act as “proof that hitting your kids doesn’t work.” His parenting tips and a little child beating humor get applause mixed with nervous laughter, but it’s all in good fun. He then goes on to explain how tattoos don’t work, as they have not cured his fear of spiders—to no one’s surprise. His observations on cat-calling and guys trying so hard to have sex are amazingly accurate. Smith points out that cat-calling is almost the Internet in real form. As he leaves the stage, the audience is out of their shell and ready for more.

Next up was Andrew Jensen, the other half of the magic that is Toy Soup. However, this was Jensen doing stand-up in his own expressive style, so the team did not perform improv for this occasion. I was a little bummed out at first, because if you’ve ever seen Toy Soup perform, it’s a once-in-a-lifetime experience, and you’ll never see the same set twice. Once Jensen started doing his comedy set, which was so good in and of itself, I quickly forgot that I’m used to seeing this guy perform silly audience suggestions. He filled us in on the fact that he has learned that meth heads are particularly persistent, in his experience living next to a crack house in downtown Salt Lake. Now that he’s moved to the east side of town, he’s more like the crazy, naked neighbor in the window. It’s been a transition for him, because meth heads, he assumed, would be easy to fight, and now he just has to worry about his neighbors being serial killers. As someone who has also lived in Sugar House, I can attest to this. Jensen has some killer jokes (no pun intended) on domesticity, and how to spot a drunk neighbor.

Speaking of drunk people, this is the point in the night that the show is in full swing, and the audience is now pretty drunk and wanting to participate. Someone shouts out “Build a fence!” and, as a professional, Jensen quickly responds with “People are going to think I’m a terrorist!”, which he runs with for a few minutes. He talked about his Mormon mission to Russia as a 19-year-old with the amazing line “We’re not gay. We’re Mormon!” By the end of his set, he and the drunk audience members were having quite the dialogue. Sometimes hecklers can ruin a show, but with an entertainer like Jensen who thinks on his feet, they added to the whole experience. When he started to talk about bears, he asked rhetorically “Does anyone know how a bear sounds?” To which someone in the drunk crowd tried to make a bear sound with a hilarious outcome. Jensen was so moved by this impression he went down into the audience to get them to do the sound into the microphone. Audience: 0, Andrew Jensen: 100. It’s a beautiful moment when the comic owns the crowd, and the crowd was thoroughly owned.

Now that the audience had gotten their yelling out and was settling down a little bit, Natashia Mower took to the stage as the headlining act. She is a treat to watch whether you get to see her for a five-minute opening act, or for a full 30 minutes of her musings. She starts out with a disclaimer that we will not be hearing any dick jokes from her for the evening, as her dick had unfortunately killed itself. Her jokes are quick and witty, in rapid-fire succession. Mower talks about naming her boobs, her idea of weird pregnancy cravings, and how co-workers peddle drugs that are questionable, when she really only needs an aspirin. She tells a few stories about her work life and the people she deals with on a daily basis, and not to spoil the whole set up, but there’s a lesson to be learned in her advice of sucking up to the Son of God.

Mower also talks nostalgically about her time working at a theater when she was younger, and her delivery of the words “man-nipples” always drives home the story of her experience there. She’s not really interested in men, if it couldn’t already be established by her disdain for man-nipples, but she has had these really weird reminders from her biological clock that she should have a baby. This brings her to some realizations about herself—that if she were into dudes, she would have been in trouble due to impulsively “putting things into her body,” if you follow that drift. Mower talks about her parents for a bit, and although it would be sad coming out of anyone else, she makes her gambling father and dead mom’s facebook sound absolutely comical. She finishes off her set by talking about stereotypes about gay people, especially the angry lesbian trope that, unfortunately comes true the second someone says that to her. She’s finally found the “gay community” (it’s a real place, it turns out), and talks about activism. By the way, she will tell you—and then back up—that not doing something is not actually the same as doing something, and she’s not about to boycott a chicken chain due to their homophobia. No, she has much better plans that involve carb loading, and doing “just a ton of gay shit.”

If you want to hear all of these jokes at length, check out other shows with Natashia Mower, Andrew Jensen, Troy Taylor and Shayne Smith who frequently perform around the valley. Sandy Station is home to Funny Fridays, and on July 31st, the group is welcoming L.A. performer Barbara Gray to the show. Tickets are $7 in advance or $10 at the door, and for those looking for a full Friday night event, a special “Date Night” package is available that includes two tickets, two drinks, two entrees and two cupcakes for $40.