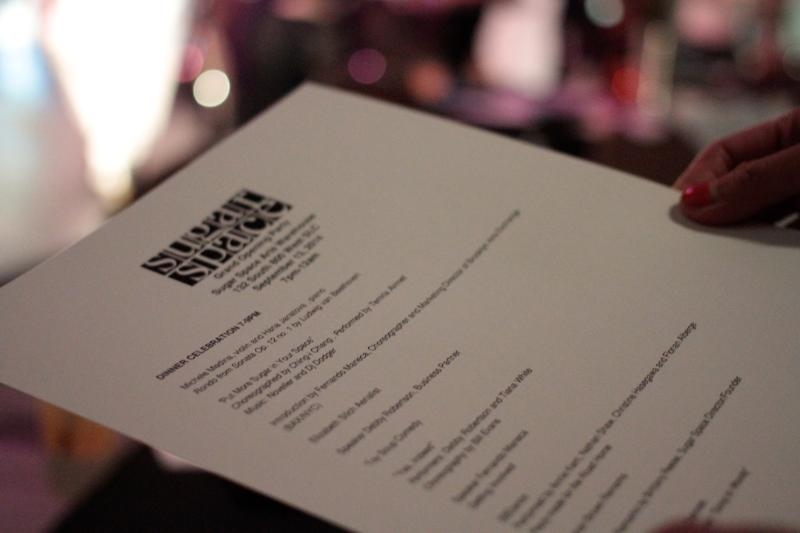 Getting Weird at the Sugar Space Arts Warehouse

I’ll admit it—I don’t get modern dance. I’m the first to start clenching my rolled up program when stuff gets weird. This past weekend, however, I had a breakthrough. SLUG was invited to the grand opening of the new Sugar Space Arts Warehouse on the west side, and I have seen the light. The show opened with soothing piano and violin by Hana Janatova and Michele Medina, respectively, but then Temria Airmet (palindrome!) started dancing in a bridal veil garnished with foam packing peanuts. At one point she handed an audience member a watermelon and spoon and told him loudly that she loved him. His reply? “I love you, too.” The dance was choreographed by Ching-i Chang, and it was quite a performance—one which started the evening. If a sister’s dance recital is lemonade, then this was absinthe taken in an abandoned Paris Métro station—artsy as fuck.

The Sugar Space is the brainchild of Brittany Reese. She started the first Sugar Space, the one actually in Sugarhouse, seven years ago. The new one is eight blocks west of Temple Square, at 132 South 800 West. Bolstered by her partner Debby Robertson, Reese says her intent is “to create a space to support artists.” Though she admits the space is more dance-centric, she was mindful to include other art forms in the evening’s entertainment, which included a show tune sung by Megan Shenefelt, stand-up comedy by Christopher Stephenson, Natasha Mower and Troy Taylor, as well as an aerial arts performance on rope by former Sea-World performer Elizabeth Stitch. The evening was a veritable buffet of performance, though we filled up on dance. The performances were top notch.

Kit Kat Caberet provided some chair dance sexy time—fishnet stockings and all. Debby Robertson herself, who is the self-pronounced money lady of Sugar Space, did a tap routine wherein she and Tiana White were sitting most of the time. One of the reasons Robertson got involved was the prospect of having a place that is “tap-friendly,” which is unusual among studios. “Tap dancers are discriminated against,” she says. “We are noisy and people are afraid we will mess up their floors.”

My favorite number of the evening was a dance to Bob Dylan’s “Song to Woody” performed by Samantha Matsukawa and Katherine Adler, aka Two Boots. I never expected to see a dance performed to acoustic Bobby-D, but when they started the dance with harmonicas, blowing a sparse version of “Blowing in the Wind,” I’ll admit that the ‘60s folk nerd in me giggled happily. “A lot of our work plays off of storytelling in a way that could be redundant,” says Matsukawa. “They are stories that you have heard before, but you are hearing them through a different voice, with a different lens, and hopefully we are bringing a new take to it.” The duo has also performed a longer piece with a larger ensemble, comprised entirely of Dylan-inspired dance and music.

Community support for performers like Two Boots seems to be the aim of the new Sugar Space. Salt Lake City’s art community is burgeoning, and Reese says that the first space was often completely booked up, leaving performers and artists without a venue. Enter stage left: the new Space, which has been transformed from a warehouse full of junk to a newly renovated facility christened by Saturday’s swanky grand opening dinner. Reese was a professional dancer in New York for 17 years, and was inspired by the facilities there that don’t draw a hard line on what art forms they support. She found there wasn’t a similar place in Salt Lake City, so she stepped into the role. “Even though I may have more of a dance background, I began to open the space and learn about different art forms and what they need,” she says. “It has been a learning experience. Gradually we have gotten more visual artists, theater companies and musicians—so now it has started to become a mix of all of them.”

The performances were definitely varied. In one evening we saw things such as SBDance‘s piece, which was comprised of characters locking lips and staying that way while doing intricate steps—kissing the entire time. Troy Taylor of ToySoup Comedy did stand-up that was mostly comprised of beat-boxing while miming what is going through the mind of people who blast their music while driving. He also threw himself to the floor a couple of times like he was being flung outside The Garage by a rockabilly bouncer.

Overall, it was a compelling evening of dance and other performances, and while some were avant-garde, I didn’t go home feeling like I had to watch Captain America: The Winter Soldier while eating hot wings to cleanse myself of all the culture I had been immersed in for a few hours… though come to think of it, that sounds like a good plan for next weekend.