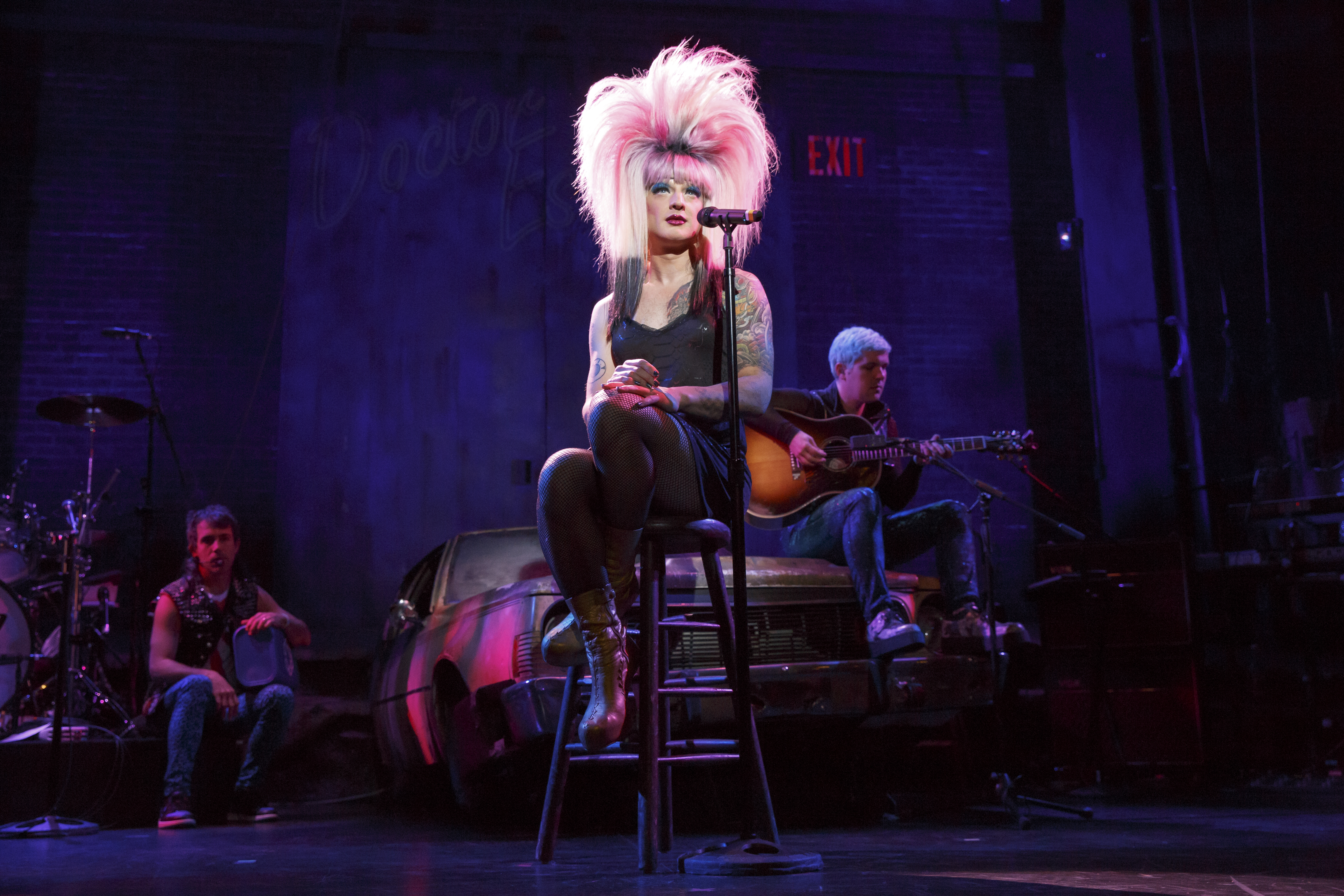 Heels, Wigs and All the Rage: Hedwig and the Angry Inch @ Eccles Theater

The Eccles Theater debuted their off-Broadway season with none other than Hedwig and the Angry Inch, a musical that is as relevant today as it was 20 years ago. The rock n’ roll musical by John Cameron Mitchell and Stephen Trask has found its way into the heart of Utah, bringing with it comical banter, Utah-focused jokes, unbeatable musical talent and an explosive stage. Before the show began, the stage was already in a state of chaos: A blown-out, wrecked car sat in the center of the stage with debris hovering around it. But it wasn’t until Hedwig hit the stage that the real explosion begins. As her husband, Yitzhak (Hannah Corneau) says, “Ladies and gentlemen, whether you like it or not … Hedwig!”

Hedwig (Euan Morton) enters the stage in pumps, glitter and a rage, sweeping the audience off their feet with her powerful vocals. The musical follows Hedwig, an East German rock star, as she slowly reveals more about her background—her emotionally abusive mother, how she suffered through a mishandled sex-change, and her misfortune with love and lovers along the way. Although she has survived numerous hardships, she “rose from off of the doctor’s slab / Like Lazarus from the pit,” and although “enemies and adversaries” try to tear her down, Hedwig loudly proclaims that she, like the Berlin Wall, is “standing before you in the divide, between East and West, slavery and freedom, man and woman, top and bottom.” You can’t tear her down.

Hedwig and her “Angry Inch”—the band she travels and plays with—are incredibly talented. The atmosphere of the theater truly felt like a concert hall, with Hedwig at its center. Those who were lucky enough to have seats in the front row were able to interact with the supreme queen, whether it was spitballs to the face, a splash of water or even a lap dance. Her sassy jokes and casually thrown shade had the audience reeling with laughter, adding to the campy feel of the production, while intimate jokes pulled the Utah audience deeper into the conversation of the play. Hedwig and the Angry Inch’s vivacity and energy never died; Corneau and Morton’s impressive vocals rang as high as Hedwig’s wig—which, honestly, is impressive.

As the story goes on, Hedwig’s façade of playing diva begins to fade the deeper we wade into her life’s story. We discover that her previous lover, Tommy Gnosis, has taken the claim to fame by using Hedwig’s lyrics—and left Hedwig in her most emotional, broken state of mind. Hedwig is a story of love and loss, survival and humor. “I laugh, because I will cry if I don’t,” says Hedwig, and again later, “I cry, because I will laugh if I don’t.”

If there is a designer I must give a shoutout to, it’s Kevin Adams. The lighting in this production portrayed Hedwig’s emotions beautifully: the power she felt, the betrayal, the rage, the chaos and love. In the song “Origins of Love,” animations by Phosphene/John Blair lit up the stage, illustrating the story that Hedwig’s mother told her at bedtime—the Greek mythological story that all humans were originally created with four arms, four legs and a head with two faces until they were separated by Zeus. There were “three sexes then,” says Hedwig. The “children of the sun” were two men, the “children of the earth” shaped like two women and finally, “the children of the moon were like a fork shoved on a spoon. They were part sun, part earth, part daughter, part son.” As Hedwig and the Angry Inch played their song, the lights dazzled the audience with animations, flashing beams and luminous rays, telling the story of the origin of love.

The musical represents multiple types of pop and rock genres, giving homage to beloved idols and bands such as David Bowie, The Who and many more. It crosses the boundaries between live comedy, gender performance and musical theater. Hedwig and the Angry Inch ask us to question our own gender performance and the origins of our love. Where did we get ideas like how to be, how to love? Are we created—physically shaped even—by the environment to which we were raised? Or is it a question of how to discover ourselves after searching hard enough? For Hedwig, what is the cost of finding her true self? Hedwig will continue to challenge and move us as audience members, so long as issues of gender, sexual orientation and identity arise in society. I give my hats off to the traveling team for putting on an excellent show at the Eccles Theater and hope that future productions in the venue are just as heartwarming, hilarious and thought-provoking.

Hedwig and the Angry Inch runs through Dec. 23 at the Eccles Theater. For more information, visit broadway-at-the-eccles.com.