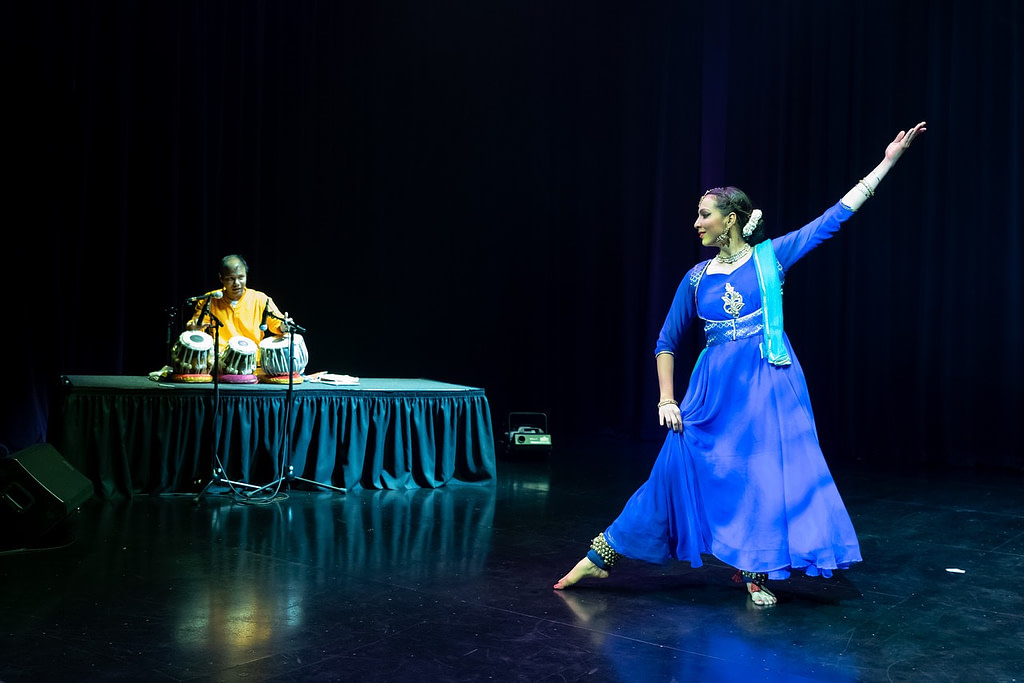 Gratitude filled the house again and again, continuously through the night. Kaladharaa Dance School was generously performing for free at Regent’s Black Box Theatre. Though I arrived late during the invocation dance, I knew the aarambh had been performed. According to the handout, which I was very thankful for, aarambh means start or beginning. The artistic directors at Kaladharaa, Nidhika and Sonali Loomba, had, with their mentors’ blessing, constructed the show as such to mark a moment in their journey into learning Kathak more deeply. As artist and composer Debanjan Bhattacharjee brings drums out and begins testing their sound, I gloss over the rest of the pamphlet. It is made for outsiders—people like me—who know nothing of Kathak. This is where the generosity begins.

Kathak is one of the ten original forms of Indian classical dance. It’s a form of storytelling where dancers, along with music, create narratives out of vivid eye and facial expressions combined with restrained, graceful upper-body movement. “Could I get a little more volume?” Bhattacharjee asks the house. Sonali eventually comes out on stage and begins dancing, jolting the slow energy of the sound check into all its potential energy. Sonali’s dress conceals just how animated the lower half of her body is, though you can hear it: Each step has a timber to it. He sings and stops playing for a moment to emphasize his words, which I can’t understand. They are performing “Jugalbandhi,” a piece of rhythmic dialogue between the percussionist and the dancer. Sonali waits for Bhattacharjee to stop drumming, then responds with fast and furious dance. They look at each other affirmingly. It’s a call and response. He sings, or speaks, so quickly, nearly as fast as he drums, and she returns the same, all the while keeping her upper body cool and composed.

“[Sonali Loomba] makes eye contact with the audience in a way that feels very deliberate and knowing.”

At this point, Elizabeth Unni comes onstage. She introduces us to the performers we’ve seen and will see. On tabla are Bhattacharjee and Tarun Gudipaty, both of whom drum like wild. Tabla are usually pairs of differently sized drums. To my eye, the drumming mixes extremely fast movement of both the palms and fingers, particularly the middle fingers. These instruments, with a history of folklore, are a perfect fit for Kathak. Playing sitar is Varanasi Abhishek Mukherjee. This is a more familiar instrument, though I couldn’t recall having seen one in person before, and I was surprised at its size and the delicacy with which it must be tuned.

Dancing were Sonali and Nidhika Loomba. These two sisters, have both earned acclaim for themselves and their school internationally. In both D.C. and Utah they perform Kathak. Were they performing in the time of Kathak’s popularity, we would call them Kathakars, nomadic bards from northern India.

The next composition is called “Teen Taal.” It runs through sixteen beats of rhythmic harmony through dance, and Sonali demonstrates a very pure Kathak style. She pounds her feet, shaking the bells attached to her ankles, which makes her an instrument as much as she is a dancer. The upper half of her body stays lithe and in communion with the music. She makes eye contact with the audience in a way that feels very deliberate and knowing. The small theatre lets you feel her feet vibrate the ground with each movement. Her outfit is an orange sheer overlaying a white dress. Each section of the dance flows into the next naturally, and the rhythm feels different each time, progressing in tempo, slow to fast, eventually climaxing.

“Perhaps it’s partly because Kathak feels foreign to me to begin with, but between her expressions and the way smoke is billowing out behind her, the whole thing feels ethereal.”

My favorite performance was “Thumri,” which was the most narrative piece shown that night, or at least the one I was able to follow most coherently. Nidhika laid out the story beats of the song before performing it, showing the facial expressions and arm movements we should expect to recognize to make sense of the story: Radha, who is in love with Krishna, is enjoying his company. Suddenly she sees birds flocking home and realizes the sun is setting, and that she must soon leave. How will she convince Krishna? Even without having these beats explained to me, I was able to follow the emotional movements because of how expressive Nidhika can be. In mere moments her gaze will shift, her smile will flicker, and you feel it. So much of the dance is in her face. Perhaps it’s partly because Kathak feels foreign to me to begin with, but between her expressions and the way smoke is billowing out behind her, the whole thing feels ethereal, tapping into the gracious energy that was set at the beginning of the night.

For the last piece, Sonali and Nadhika dance together, the first time in 13 years they’ve shared a stage alone. It’s entrancing. They stay so in sync, and so purposeful in their gaze and arm movements. It’s a treat.

“There is a rich history of classical Indian dance that deserves attention in Utah.”

The evening ends in much the way it began—with gratitude. Each performer is given a shawl and a note of thanks. There is big emphasis on making sure each person is thanked and appreciated, particularly those who made the night possible, as well as the audience for their interest. Though the event was clearly designed to welcome newcomers to the form of Kathak, many friends and family attended as well. The message was clear: Kaladharaa Dance School wants more people to know they exist, let them know what Kathak is and that there is a rich history of classical Indian dance that deserves attention in Utah. If you’re interested in Kathak recreationally, they encourage you to look into it. For what it’s worth, I left feeling lucky, like I’d seen the beginning of a group’s long-deserved recognition.

To learn more about Kathak and the Kaladharaa Dance School specifically, visit their website. I recommend searching for some Kathak videos on Youtube, but start by seeking out Nidhika and Sonali specifically for a sense of just how graceful this art can be.