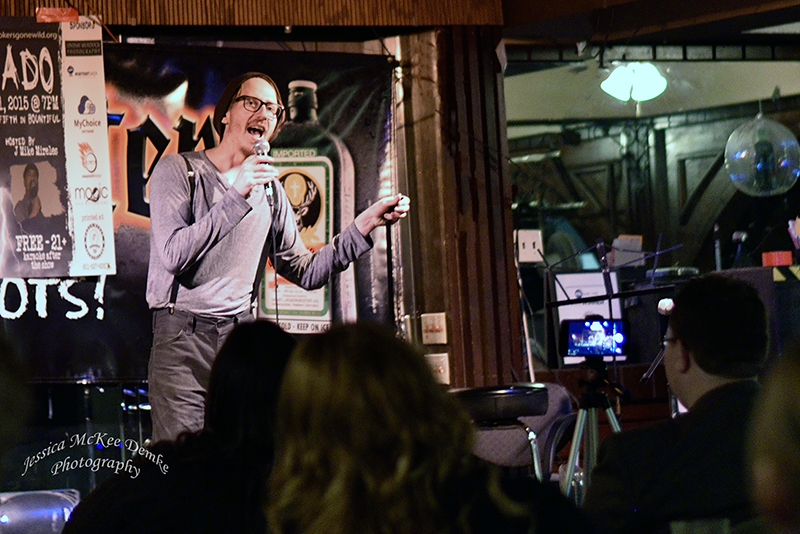 Levi Rounds has hit a milestone for any comedian in the business, and although we’re not talking about him just staying alive for a decade—which is also impressive—he’s been gracing stand-up comedy stages for 10 years strong. This Saturday, Aug. 8, at Metro Bar, Rounds will celebrate with his show “A Decade Deep” doing the thing he does best: a side-splitting two-hour comedy special with some of his funniest friends, with Rounds himself doing a full, one-hour set. The show will also be hosted by the main attraction and featuring the comic genius of locals Nicholas Smith, Natashia Mower, Christopher Stephenson and Arthur Carter. Rounds, himself a former SLUG comedy writer, has been a beacon of the SLC indie comedy scene, who has hosted, been featured in, or headlined many shows in Utah and abroad. He met up with SLUG to give us a little insight about what a decade doing comedy is really like, and what his landmark show will have to offer.

In his 10 years onstage, Rounds estimated that he’s probably done 1,000 or more shows, sometimes six shows a week—not counting open mics, which he compares to a comedian doing homework. But he really only counts 10 shows that stand out. In those 10 he mentions that the important ones were where he opened for his idols and had people show up to something he considered very important to him and his career. When asked if he had any stories that were memorable, he did get punched onstage once, and then had a knife pulled on him after a set at Club Vegas. “If I ever get a gun pulled on me, that will be the trifecta and I will just leave comedy.”

Levi Rounds brings up how both he and his jokes have changed over the years. He mentions that some of his old jokes just wouldn’t be something he’d do these days, including the first joke he ever presented onstage. “I have friends that still love it, but I hate that joke now because it is so mean-spirited,” he says. “You start out by saying shitty things.” However, he doesn’t get rid of all of his old jokes, for those audience members out there that are hoping to see their favorite bits. “I tell some of the same jokes I did three years ago because they are still evolving,” says Rounds. “I feel like you should always be evolving and coming up with new material.”

Much has evolved with not only his jokes, but within the comedy community at large. He’s noticed a shift from what had largely been a problem with a lack of female comics and the prevalence of misogynist jokes. “Don’t ask a girl in the crowd about their tits,” he says. He’s unapologetic about letting those that rely on tasteless rape jokes know that those do not automatically equal funny. “The only people that can make them funny are people that have been doing it for 30 years,” says Rounds. He adds a few comedians that he enjoys may use it in their material, but points out that they “did it in a really clever or interesting way.”

As for what he’s seen as the biggest change in the Salt Lake comedy scene over the last 10 years, he applauds the change in camaraderie. “People, they get along now,” he says. “It used to be so vitriolic.” In the beginning of his stand-up career, it was noticeable that one couldn’t perform on both the club and the indie scene. “There’s not that vitriol we used to have,” says Levi Rounds. The next biggest change that he’s excited to see take place is the level of female talent hitting the stand-up circuit in this state. “It seemed like it was just Melissa Merlot for awhile.” Now, he points out, we’ve also got Natashia Mower and Abi Harrison, as well as an influx of other funny ladies, with many more popping up just within this last year. He’s seen more male comedians take a stand against the aforementioned misogyny, and keep stages safe for females who they consider equals and friends. “It was like, ‘Ha! Chicks can get into this, and it can be O.K.’ People will even call out new comics for shitty misogynist jokes.”

So why don’t some comics make it to this 10 year milestone? It’s pretty simple. “You get over it in a way that it’s like, I got that in my system, or you get over it in a way that you’re like ‘I can’t do this anymore!’ and you take a break,” says Rounds. Being consistently funny onstage for over a decade is something only a handful of comedians can claim. “There’s been a million comics that have come and gone, a lot of them that you’re glad they are gone, but some of them you are like ‘goddamn it’.” Some of his notable friends that have stuck around or been doing comedy longer are the likes of Toy Soup, Christopher Stephenson, Rodney Norman and Arthur Carter.

Rounds reminisces to a time when there was virtually no independent comedy scene—when he first started out. “There was only Mo’s on Sunday night, and it was crazy. You’d get 80–100 people, standing room only, for an open mic.” The old Mo’s Diner at its downtown location has since been torn down. Rounds was one of the hosts for the Sunday open mic for a few years. “I hate this whole ‘censored/ uncensored’ bullshit that everybody talks about because it’s all just comedy. But, at the time that was the only place you could go to see comedy as an adult.” During this time the comedy club scene was catering to a different crowd, and understandably didn’t want their crowd to walk out of shows. “When they tore Mo’s down, they tore down all the walls and it was all rubble, but the stage was still standing. The stage was still there for whatever reason.” These days, more comics are taking more initiative to make more shows, like Comedy and Other Opinions—run by Jason Harvey—and Dungeons and Comedy—started by one of his featured comics, Nicholas Smith. He’s not fond of everything, though. “I get sick of theme shows. And how many roasts do we need? Everybody is roasting everybody.”

He did mention one thing he’d do over. “I wish I would’ve started and not told anyone for like four years.” All in all, however he said he doesn’t have many regrets. “I have definitely chosen a harder route. I feel like, obviously 100-percent I’m supposed to make people laugh, but if I can make people think at the same time, that’s a lot more fun for me. I can get up and tell dick jokes all day and talk about my weird neighbors and shit, but that’s not challenging.” Levi Rounds draws from his favorite comics, and that can be seen onstage, taking notes from Pryor, Carlin, Doug Stanhope, Bill Hicks and going all the way back to Lenny Bruce. “You listen to it now and it’s tame as fuck, but at the time, he was being arrested and kicked out of venues,” says Rounds. “Those are the people you remember.”

This Saturday, Rounds will be both hosting and headlining his two-hour comedy special. He wants to be clear that it’s not a tribute show, and it’s definitely not a roast, as his aforementioned disdain for those sorts of things shines through. “It’s just a fun way to mark a milestone,” he says. “Ten years of mediocrity.” His comedy is anything but mediocre, as can be seen live and in person, and will not be disappointing.

Levi Rounds: A Decade Deep will be at Metro Bar downtown, a 21-plus venue. Entry is $10 at the door, DJ Mukky will start off the night from 9–10 p.m. with the comedy show starting at 10, and music will resume after the show until the bar closes. Come out to dance, enjoy some drinks, and laugh, because this is a one-time event that you will not want to miss.