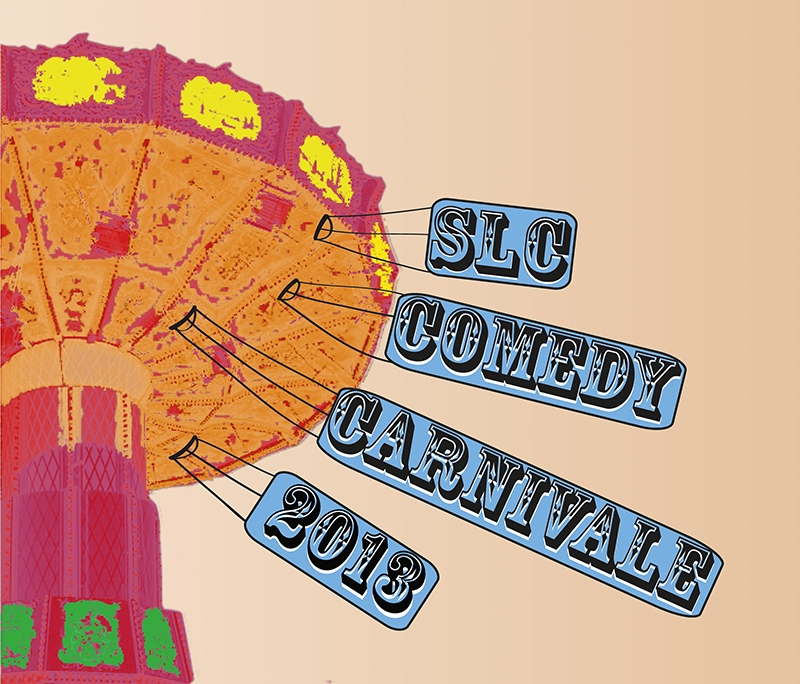 Hold on to your dicks, because Utah’s first-ever submissions-based comedy festival, SLC Comedy Carnivale, is happening from Sept. 17–21. Don’t be belligerent about it, because we’ve got you covered with details. SLUG had the opportunity to sit down with the Carnivale’s co-organizer, Christopher Stephenson, to talk about the biggest comedy event of the year.

SLUG: Tell us all about your, and co-founders Ben Fuller’s and Andrew Jensen’s background in comedy.
Stephenson: I met Andrew a long time ago, when I was 19 at an open mic. He was doing improv, and I was strictly doing stand-up at the time. They wanted to do sketches, so I agreed to do some films with them. I met Ben Fuller when he was dabbling in stand-up, but also when he figured out he’s more of a fan and supporter of comedy than a performer. He had some good connections with The Complex, where he could get people together in a good venue to drink and do local comedy.

SLUG: How did you come together to put on this festival?
Stephenson: For the last year and a half, we’ve wanted to do something bigger in Salt Lake than the smaller bar gigs we generally do. There’s not a big launch pad out here, not a place you can really put your name out. When you go out there on the road, and only have one night to do a show, it’s incredibly hard to network. We all decided to do a festival run by comedians for comedians, so comedians show up and are treated like comedians.

SLUG: What’s the schedule of events?
Stephenson: We have 14 different shows, 34 different acts at seven separate venues. There will be a big bar crawl on Tuesday night to kick off the festival, where many of the comics from out of town will be getting to know everyone and do 10-minute sets after every round of drinks or so. Wednesday will be stand-up at The Complex. I’m really excited about Thursday night because we’ll be performing improv at the new Sugar Space, an outdoor venue in the River District. On Friday, we’re going to have big headliners perform at The Complex. On Saturday, we’re going to be showcasing all the film entries at Brewvies. A portion of all proceeds will be donated to the MS Society of Utah.

SLUG: Which acts are you excited about?
Stephenson: Former Salt Laker Barbara Gray and her podcast cohorts of Lady to Lady will be headliners on Friday. They’re a big deal out in L.A., where they just got the nod to perform on Comedy Central’s stage in front of the studio moguls. I’m also really excited about Whitney Street, Matt Knudsen and Boston-turned-L.A. woman Laura Crawford. People told me to have high expectations about Laura, and her submission blew me the hell away. Lots of good local comics will be performing, and we also have a very special secret headliner that I can’t tell you about yet, but I cannot wait to see him perform!

SLUG: What sets the Carnivale apart from other local comedy festivals?
Stephenson: Besides this being the first submission-based festival, we wanted to throw a show where we can tell the comics that they can do whatever they want to do onstage. I just love that freedom to be able to tell performers that. We set the age limit to be 21 and older so comics can be however dark and dirty as they want.

SLUG: What criteria did you use for the selection process when you were going through submissions?
Stephenson: It was really hard because there were so many people that turned in good material. Colin Quinn once said it’s unfair to judge comics based solely off of one submission video because it really isn’t a barometer on how good of a performer they are. We asked for one video submission that the comics particularly like, and also left space open at the end of the submission form for anything that the comics really wanted us to see, including résumés, mini-bios and reasons why they do comedy. It was great that we all had completely different tastes, so a lot of different comics made the cut. Surprisingly, not very many local comics submitted.

SLUG: What do you hope to accomplish with this festival as far as the Salt Lake comedy scene goes?
Stephenson: Aside from networking and putting on a show that doesn’t have strict boundaries, we are just really excited to see serious out-of-town comedians come here more often, whether it’s just an airport layover or a stop through a road tour. I’d love to help give the local talent a chance to put their names out there through networking. I hope this event really launches those things. Historically, this is the largest comedy festival that Utah has ever seen. That’s a big deal to me.

That should be a big deal to all the people in the land who held their dicks in anticipation for this festival to finally come. Everyone can resume being belligerent once they check out SLC Comedy Carnivale at slccomedycarnivale.wordpress.com.