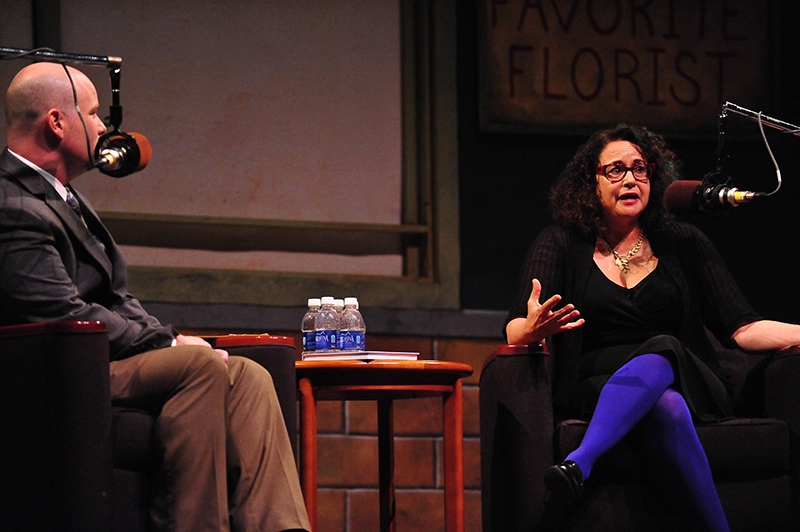 Monday night Brooke Gladstone, Managing Editor of NPR’s On the Media, sat down with Terry Gildea, the News Director for KUER, for a loose fitting interview that encompassed Gladstone’s refreshing insight on contemporary media. The discussion for the evening was specifically plotted around “Contemporary Journalism in the Age of Digital Media.”

Gladstone walked on stage wearing bold purple tights, a black dress, and a bright turquoise strip of curls contrasting her dark brown hair. Her ensemble was completed with deep, red-rimmed glasses to match her lipstick. Her presentation is only important because of the wizardly images of J.K. Rowling’s witchy reporter Rita Skeeter so easily comes to mind, the difference being, aside from Skeeter’s obvious fictionality, Gladstone’s devotion to integrity and serving as the public’s eyes. Gladstone’s career as a beat journalist, reporting on the media, has proven her to be a reliable guide when looking to navigate the sea of information listeners and viewers are flooded with each day. The conversation divulged Gladstone’s thoughts on a variety of complexities in the media, including accountability, objectivity and what it means to fairly report.

Gladstone reminisced on Walter Cronkite, a legendary (in the most appropriate usage of the word) news anchor for CBS news who was often referred to as “the most trusted man in America.” She explained that his objectivity and commitment to staying emotionally free from the stories he reported on, were traits once demanded by the American people. “His (almost) arrogant famous line of saying ‘And that’s the way it is.’ No one would dare say such a thing now,” Gladstone mused. She furthered her point, by saying that the idea of objectivity has been eradicated in this new age of media. Instead, that ideal has been replaced with transparency. Using Jon Stewart from The Daily Show on Comedy Central as an example of favored directness, the obviousness of reporters such as Stewart are what the public craves, “transparency is the new objectivity,” she stated.

Gildea took an opportunity to shift the direction of the conversation to focus on the behavioral influence social media plays in the delicate ecosystem of information. He read the key points from Breaking News Consumers Handbook, which was put out by OTM. While the guide was specifically created for news stories involving shootings, Gladstone was more than happy to add to the ninth warning, which is “Beware reflexive retweeting.” She pointed out that the only information that can have full stock put into it, are events that happen directly in front of you. She says, “don’t retweet or reblog anything you don’t resolutely know, unless of course you add ‘but I have no idea,’ to the end.”

The interactions between Gladstone and Gildea lacked the rigidness of traditional interviews, whether the Little Shop Of Horrors scene behind them negated a sense of obligation to stuffiness or not can be debated. Ultimately, the camaraderie between the two journalists seemed to permeate the atmosphere. At no point during the evening did the conversation lull or feel forced. Rather, it was over too soon, as delicious treats often are.