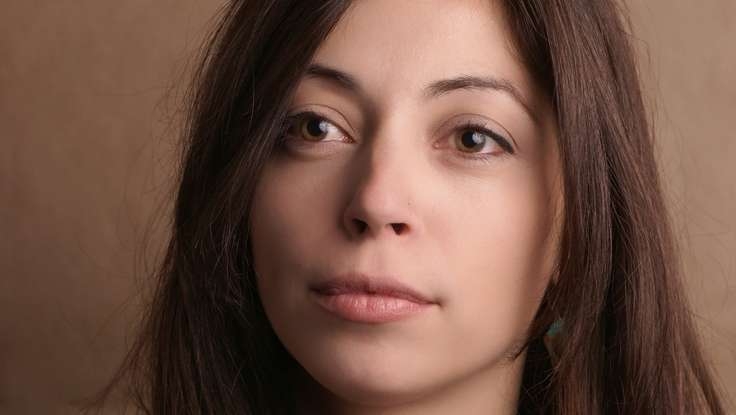 The intersection of art and activism has been explored and discussed endlessly, and for good reason. Sometimes, art is the only way to help others fully understand or express injustice. For this year’s David P. Gardner Graduate Lecture in the Humanities and Fine Arts, the University of Utah brought artist, activist and Artistic director of The Art of Revolution, Naomi Natale, to the Libby Gardner Concert Hall. This series’ past lecturers have included literary critic Harold Bloom, feminist artist Barbara Kruger and Judith Jamison, Artistic Director of the Alvin Ailey American Dance Theater.
Like her well-known TED Talk, Natale’s lecture was full of conviction and focused around a discussion of her work, infused with proverbs, anecdotes and calls to action. Natale’s story begins after her visit to Kenya. She returned to America, lost—how could she begin to translate her newly shattered worldview into something productive?
So, Natale decided to embark on a series of social art practices—works that value the experience of creating the work as an integral part of the work itself. The collective practice would soon become her signature. Natale began with The Cradle Project, in which she asked artists to craft empty cradles that would then be auctioned off. If someone could see potential in these cradles crafted from scraps, she reasoned, then they could certainly see potential in those the funds would benefit—children in Sub-Saharan Africa affected by HIV/AIDS.
Natale recognized the usefulness of art. People sometimes need to see, hear and feel things differently in order to understand a difficult subject. She decided to tackle an international topic close to her own heart: genocide. Her most well-known project, One Million Bones, collected bones—some clay, some papier-mâché—made by people all over the U.S. The bones were then laid out at the National Mall, resulting in a vast, site-specific installation and aesthetically striking depiction of a mass grave. In a short documentary about the project, we meet the different types of people who contributed to the project. Bone-makers included American high school students who connected to genocide victims because of their own experiences with violence, as well as Burmese refugees who dedicated the bones they made to the loved ones they had lost. Holding up a clay pelvis bone for the audience, Natale explains that the bones remind her of life, birth, beauty and the fragility of those things, as well as death. Sometimes, Natale explains, it isn’t until we physically carry the bones of another human being that we realize that we are all responsible for one another—that we belong together.
Natale went on to discuss her current projects with The Art of Revolution. In “1973 en la luz,” Natale takes her work to Chile to spark a much-needed conversation about the country’s recent, post-1973 coup d’état history. The Art of Revolution drew some careful (and rather lovely) connections: Chile’s Atacama Desert is one of the driest places in the world, so the stars are extraordinarily bright. The light of one particular star is especially important. This star is located just the right number of tens of millions of light years away so that when we gaze up at it, we see the light from 1973. On Sept. 11—the day of the coup—participants would write down their memories, or their families’ memories, onto paper lanterns to be released into the air, sparking a national dialogue and illuminating the sky.
The lecture was engaging, Natale’s artwork is powerful, and the countless stories she told were moving, but I wanted to hear more. I wanted to hear about setbacks, about the process behind conceptualizing and creating such grandiose pieces, about whether or not it’s enough to simply raise awareness. During the Q&A afterward, I asked Natale if she ever received any negative feedback. She had, of course, but if her work didn’t have any backlash at all, Natale says, her art would not be provocative enough.
I disagreed. I wanted Natale’s works to be more radical in their stances, her discussion made more provocative. Her statements were encouraging and inspiring enough, but much like the heartfelt, sentimentally soundtracked videos she showed us, they weren’t challenging. I appreciated the immensity of her projects, and the many lives and perceptions that may have been affected by her work, but the pieces were more meditative than revolutionary. I recognize, though, that activism in art can be the same as it is in politics: If it’s perceived as too daring or too bold, it precludes itself from more widespread support, and sometimes it’s just safer and more productive to tread that in-between. I still wondered if The Art of Revolution would ever launch a work for something that weren’t already so widely agreed upon as an atrocious violation of human rights. (Consider: the unjust treatment of detainees at Guantanamo Bay, police brutality, systemic discrimination by governments that are friendly with the U.S., and so on.) After all, art is art. It’s unapologetic.
Natale ended her lecture on a compelling note with excerpts from Audre Lorde’s “The Transformation of Silence into Language and Action”: “What I most regretted were my silences,” Lorde writes. Natale’s talk leaves us with a few heartening—and necessary—reminders. She reminds us that we, as human beings, belong to one another. She made me realize how special a social practice that art can be, not only for its value or the process, but also in its ability to demand that people participate in something larger than themselves. Most importantly, Natale calls us to action: We have voices, she says. Those voices matter, and there are many ways by which we can express them—voting, film, music, writing, listening, striking, rioting. Natale leaves us with Lorde’s words: “What do you need to say? What are the tyrannies you swallow day by day and attempt to make your own, until you will sicken and die of them, still in silence? … I am myself, a black woman warrior poet doing my work, come to ask you, ‘Are you doing yours?’”
Photos: