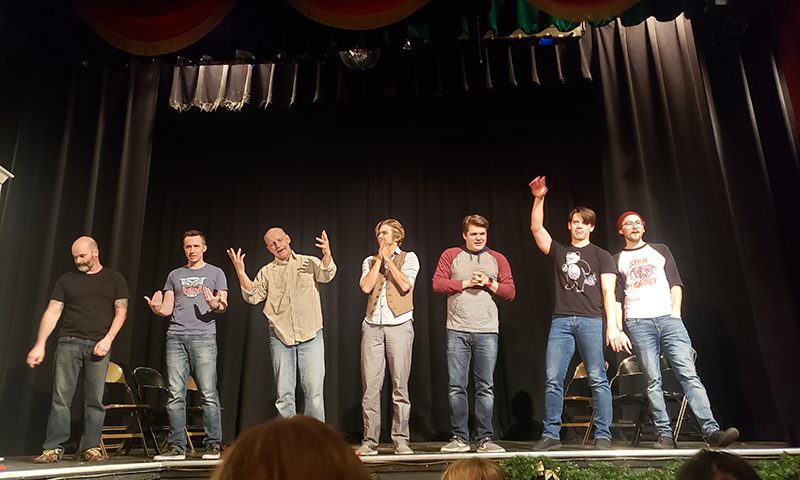 I’m one of those that can say they’ve worked on Main Street and Broadway in Salt Lake City for most of their adult life. Those of us who all go to AJ’s Market every day and talk to Omar, normally pass by the Off Broadway Theatre (OBT) before or after convenience shopping. OBT also sounds like a violent contractible disease meaning, foremost, I got my dad joke out of the way early. More discerning is that after 25 years of hosting brazenly “off-Utah” stage plays and comedy, the 501(c)(3) nonprofit Off Broadway Theatre troupe has officially locked their doors, making way for a gentrified bliss of storefronts over historically relevant architecture—this is my rant about the last ever show performed there.

OBT has been the proprietary work of Eric and Sandy Jensen for the last 25 years. Eric got his bachelor’s degree in theater arts and later went for his master’s in secondary education. Sandy, aside from positioning herself as OBT’s Executive Director, went to college for elementary education and teaches in Davis county. “Our whole mission was to make the Wasatch Front laugh,” says Jensen. “It’s something that heals the community regardless of religious affiliation, race or gender. If you can laugh together, you’re accepted. It’s been hard work, but our relationships are what we really care about.”

“If this is how many people show up, they should shut down the theater more often!”

It’s kind of funny, because most downtowners you meet will likely say they’ve seen the Off Broadway Theatre for as long as they can remember but have never gone inside. I also used to be part of the “never been there” crowd, but that night was different—once I got off work I somehow ended up drinking beers at Junior’s Tavern with that night’s show host, Zach Reynolds, and sound guy/electrician, David Bellis. We batted around service industry slander while they centered their chi for the last show. I treated my parents to this Christmas finale. Arguably, the politics with that building are the last historical Salt Lake City-based wildfire that happened in 2019.

The last night of OBT began with an early evening Christmas play It’s a Wondrous Life, taking a spin off of the movie It’s a Wonderful Life. We skipped the play because the obvious attraction to end the era was the Laughing Stock improv troupe who had been putting on comedy skit shows every late night Friday/Saturday “since forever. Thank you little theater,” says Jensen.

The deeper meaning to OBT and many nonprofits is offering contributors an outlet to do something productive for humanity outside of their normal routines.

Laughing Stock started promptly at 10 p.m. that night after the play, jumping straight into a star-studded cast of the 15 most memorable comedians to have graced the stage throughout OBT years. Reynolds narrated the entire show and cold opened with, “If this is how many people show up, they should shut down the theater more often!” The troupe felt nostalgic, but were also eager to jump into the last ever time they would get to play improv games with one another on the OBT stage. Laughing Stock started with the “Offend Everybody” skit where Eric Jensen joked of trading their child for another kid. They banter, “the hook is funny, until there’s blood on it.” The troupe’s next skit was the “Worst Ever” game, and the audience unanimously decides the comedians would play the worst pizza delivery guy ever. Actor Chris Harvey hits his character on the nail playing as a pizza guy walking into your house, gently shaking your unconscious body until you’re awake, saying, “Hey ,dude, I forgot your 2-liter.” Throughout the entire performance, all actors were spontaneously spraying one another with one-liners to the point where Aaron Bellis ended up having to interject an overtime Shakespeare impersonation skit saying, “Actually I really need to go to work right now.” He really did have to go to work. The audience’s adieu for his last OBT performance was singing Steam’s “Na Na Na Na Hey Hey-ey Goodbye.” Pure gold.

“Our whole mission was to make the Wasatch Front laugh,” says Jensen.

I’m not going to say the show turned into a downer after that happened, but it did pull a heartstring or two. The deeper meaning to OBT and many nonprofits is offering contributors an outlet to do something productive for humanity outside of their normal routines. There are many trajectories and ideals being voiced by community folks about the current restructuring of Salt Lake City. Blatantly, there is only so much that smaller fish are able to accomplish when the bigger waves decide to change the scenery. The never-ending puzzle is that we get oddly tasked with creating something as a whole, and it either ends up awesome or it sucks. We’ve seen a lot of changes in this city over the years, and the best products of witnessing that environment have been the collaborations from people who use the materials at hand and deliver something that genuinely benefits humanity.

Working that same essence of communal grit, Off Broadway Theatre is looking for a new home! Since that kind of shopping tends to take time and nurturing, feel free to see OBT at their temporary squat in the Midvale Performing Arts Center. Here are some websites, too, so you can reach out: theobt.org and laughingstock.us.