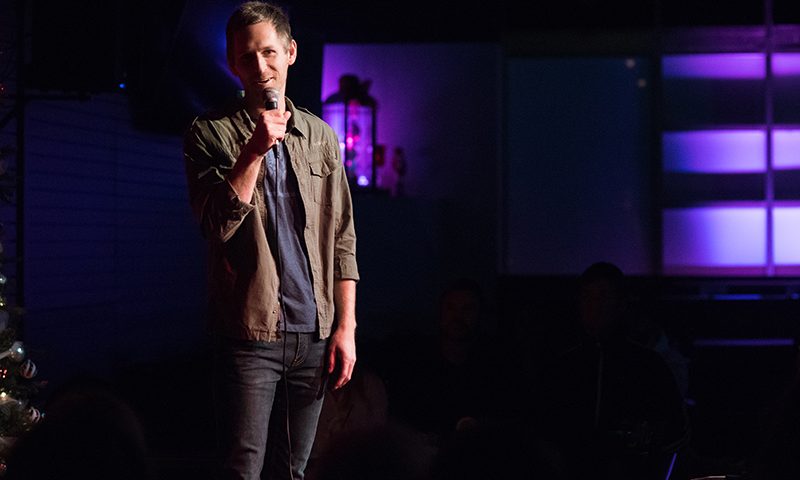 Pete Jr. has been all over the place for more than a decade. From California to Hawaii to doing comedy in tiny little towns in North Dakota, he keeps finding his way back home to Utah where he was raised. He’s a comedian with a plan and an ever-evolving style, whose passion for comedy has inspired him to keep coming back for over 10 years. He’s been a finalist in multiple comedy competitions, appeared on the comedy holy grail of radio, (Mick and Allen) and travels the country hitting comedy festivals from coast to coast. Now, he’s back on his home turf and headlining Wiseguys Comedy Club in Ogden for one night only of gut-punching laughs.

Pete Jr. has a sitcom-worthy legacy of comedy ups and downs peppered with breaks from the stage only to come back triumphantly. He estimates that his total stage time has been around 10 years, but he started out as a fresh-faced 20-something, hitting the very same stages and open mics as our local crop of stand-up comedians. At one point, he was thinking that he was the “laziest comedian ever,” as he watched other comics hit multiple stages in a night. Now that he’s back onstage, he’s appearing on multiple festivals in 2020, full of ambition. “I like the chase of it. I like to be pursuing something,” he says.

“I kind of burnt myself out and took three years off, and now that I’m back, I think I’ve found a good balance.”

In his time on the stage, he’s learned a few secrets in longevity and in growing as a comedian, and now we are witnessing his “resurgence.” “I think every comedian, at first, thinks ‘I’m going to be a comedian and I’m going to be ‘famous’ and we all kind of do this aimless sprint,” Jr. says. He began doing comedy gigs that he just didn’t feel like they were helping him in anyway. “I kind of burnt myself out and took three years off, and now that I’m back, I think I’ve found a good balance.”

He left Utah to break away to the beach, but kept finding his way back, leaving the much-different California comedy scene behind. “People don’t realize how lucky we are here in Utah. We have, in my opinion, one of the best comedy scenes in the country—by a landslide,” he says. He didn’t even start to realize that he was funny until he came back to Utah stages. “When I was in California, you do open mics, and you’ll be in a room full of comics who aren’t listening. Or, you’re in a coffee shop where there’s a blender going off in the background and you’re talking to yourself,” he says. “It’s very difficult to figure out if you’re actually funny.” It was on a visit back to Utah where he dropped into an open mic. Junior says, “People were laughing I was like ‘holy shit, am I funny?’”

“It wasn’t until I finally accepted that if you want to be a comedian, you’ve gotta be willing to try something new and you’ve got to be willing to let it fall flat on its face.”

After a few sets back where everything was going great, a comedian’s worst nightmare happened to him

when he bombed horrifically. He says, “I didn’t do comedy again for six months.” He would drive to the comedy club and try to talk himself into going in while he sat in the parking lot—it would never happen. He would turn around and drive back home. “It wasn’t until I finally accepted that if you want to be a comedian, you’ve gotta be willing to try something new and you’ve got to be willing to let it fall flat on its face.”

He’s seen comics push so hard and fast for fame that they leave the stage altogether when something doesn’t work out. This is how he realized that he was going to keep comedy in a place where he could keep having fun with it. “At the end of the day I love it,” he says. “I love the feeling right before you go up on stage and the jitters. I love the feeling when a new bit just destroys the room. I love the feeling of driving to the comedy club thinking ‘this is going to be a kick ass show.’ I love every little aspect of comedy.” If he ever catches himself pushing too hard, he goes back to the roots of his passion. “I’ll never not love it. If I live to be 90 I promise you I will be up cracking jokes as an old man. I just don’t see ever getting sick of that feeling,” he says.

“I feel like comedy is not just the guy who is cracking jokes all the time. I feel like it’s solving the riddle.”

Pete Jr. grew up admiring comedians on Def Jam, such as Bernie Mac. He watched and learned about jokes that, on paper, wouldn’t be particularly funny, but with the right delivery. They were side-splitting. Jr. says, “I wasn’t the guy making everybody crack up all the time. That wasn’t me.” He continued to watch comedy from a distance as if he were piecing together a puzzle. “I feel like comedy is not just the guy who is cracking jokes all the time. I feel like it’s solving the riddle. Of course, it’s about being funny, but a bit that I always appreciate is when it’s clever.” He draws his inspiration from comedy that was right in front of you the whole time, jokes where a comic points out something that anyone wishes they could have come up with because it was right out in the open. “I love that—hidden in plain sight.”

His style is fast-paced, clever and delivered expertly. Coming from his daily life, anger, pain and struggles, Pete Jr. is unafraid to tell the truth. “I think most of it is that I start with something that irritates me, and that becomes a bit. Somehow I start with this little pet peeve, and it weaves into a stand-up structure.” His comedy is deeply personal, which is why when it lands, it lands in a big way. “I feel like I’m talking about stuff now that’s a lot more true to me,” he says. “My youngest son has autism, and I have been able to use my experiences, the way people react to you, and I can take all the stupid things people say and punch it in the mouth.”

“It’s weird because to do comedy, you have to believe in yourself, but I struggle with the concept of belief.”

He has been through enough heavy stuff to make anyone lose their humor, such as divorce and losing a child. He has made jokes out of it all, not allowing anyone to tell him he can’t do it, or that it’s offensive. “For me, it takes something that had all this power over you and you are taking something back,” he says. “The only time you think about it, it’s painful, so you try and avoid it. When you feel like you can do it, and have a stand-up bit that can connect with the whole room, it’s a great feeling. It’s as true to you as anything ever will be. No one else will ever have that story.”

Pete Jr. also describes himself as being “really neurotic.” “I’m always in my own head,” he says. “It’s weird because to do comedy, you have to believe in yourself, but I struggle with the concept of belief.” He equates this to watching something like American Idol—someone gets up and they are so bad but tell the viewers that all you have to do is believe in yourself, and it makes you question if everyone really should. Pete says, “But if you don’t believe in yourself, you’re never going to be able to do any of this stuff.” He writes jokes not knowing if any of them will work, knowing that he will just have to commit to it and give it a go onstage. “When it actually comes together it’s taking a break from being in your own head and constantly questioning everything,” he says. “That is a very addicting feeling. It’s like this version of you that people don’t see the majority of the time, but deep down, I feel like that’s the real you.”

“Go up and try it. You blow up the room, and if you do, that’s a killer feeling. But if you don’t, it’s like, who the hell cares? You tried it.”

His advice to any new or struggling comics: “Don’t be afraid of bombing.” He still gets the jitters and still gets shaky before going up. “Go up and try it. You blow up the room, and if you do, that’s a killer feeling. But if you don’t, it’s like, who the hell cares? You tried it. You got up and tried it. You survived. You’re fine.” He encourages comedians to break out of their comfort zone and keep writing, even if it’s just 30 seconds every month. “Just be willing to try something new, and be willing to accept that if it doesn’t work—that’s fine,” he says.

Pete Jr. will be headlining Wiseguys in Ogden on Jan 10th with Ryan Erwin and JD opening. The show has a great lineup of hilarious talent on a Friday night, right on Historic 25th Street. You can also see him on the comedy festival circuit—2020 North Carolina, Mutiny Radio Comedy Festival, Sno Jam (Jan. 23–25) and Skankfest South (Mar 27—29). Tickets are on sale at wiseguyscomedy.com for $12.00.