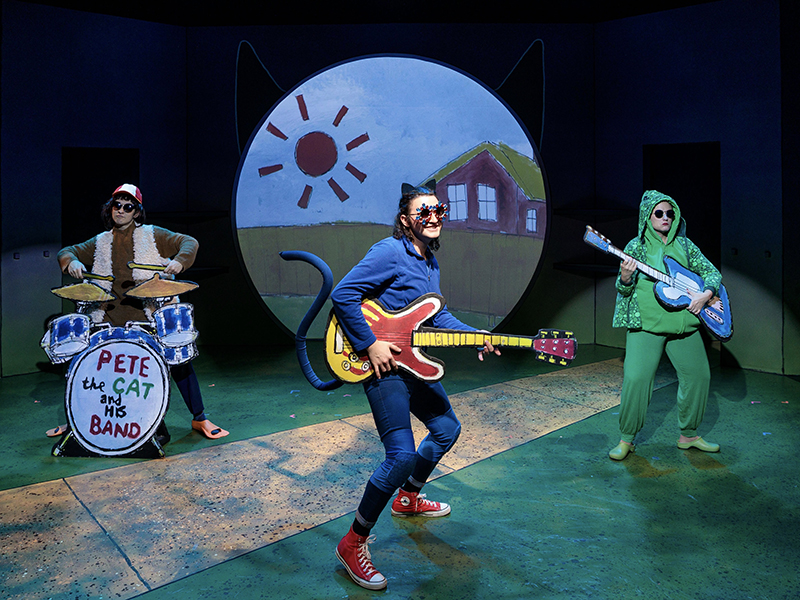 Exciting, accessible and community-driven professional theatre is happening in the Marmalade District at the foot of Capitol Hill. Located at 168 West and 500 North in North Salt Lake, Salt Lake City Acting Company (SLAC) is presenting the musical Pete the Cat from Dec. 6 through Dec. 30. SLAC’s Pete the Cat, directed by Penelope Caywood, is a charming and zany show about bravely exploring the arts. The character Pete the Cat is the protagonist of a prolific children’s book series created by Kimberly and James Dean. In the play, the free-spirited and fearless feline rock star played by Jacob Weitlauf is sent to live as a house cat of a family with two young children. Instead of being domesticated, he helps the high-strung, bookworm son named Jimmy (Joseph Paul Branca) step out of his comfort zone and embrace his artistic creativity. The two embark on a series of adventures that grow more and more fantastical, with Cameron Aragon, Shelby Andersen and Trayven Call all playing a myriad of supporting characters. Between the writing, the actors’ spirited delivery and the style of Caywood’s direction, it almost seemed that the adults in the room laughed as much—if not more than—the children.

“Every performer on stage gave bold, enthusiastic and dedicated performances that kept audience members of all ages thoroughly engaged.”

The members of the small cast of Pete the Cat were all excellent actors, and each elevated the show to a higher level with their talents. Caywood’s choreography was fun and energetic, and the pace of the show was at a breakneck speed from start to finish. The relatively short (hour-long) runtime was full to the brim with adventure and kept kids glued to the action on stage. Weitlauf, playing the titular Pete the Cat, was the first to come on stage and maintained a commanding, bombastic presence from that moment until the very end of the show. Branca did an excellent job embodying a truly electric, sympathetic and funny character with relatable, nervous vulnerability.

Aragon, Andersen and Call all played multiple characters and juggled them expertly. Each added subtleties to their individual roles that heightened the show as a whole and kept it consistently dynamic. Aragon had an exceptional, vivacious energy, especially when playing Olive, the younger daughter of the family. Andersen’s stellar singing voice shone bright throughout the show as Mom and her other characters, and Call brought a great sense of comedic timing and nuance as Dad. Every performer on stage gave bold, enthusiastic and dedicated performances that kept audience members of all ages thoroughly engaged.

“The message of Pete the Cat is all about expressing oneself, which aligns with the mission of the production and furthermore one of the goals of Salt Lake Acting Company as a whole.”

While the talent onstage was clearly top-notch, the technical aspects of the show were fantastic as well. The lights, props and sound design were all great, and the use of projected images to create different backdrops on stage was elegant and effective. As an example, during an underwater scene, bubbles floated through the deep blue stage lights down from the rafters above, causing children and adults alike to cheer and whisper excitedly to one another. The contributions of set designer Gage Williams, light designer Jesse Portillo, costume designer Dennis Hassan and prop designer Justin Ivie created magical moments throughout the show.

Since the show’s intention is to get kids interested in exploring the arts, there was a good deal of audience participation that would directly rope crowd members into the experience. Before any of the actors stepped out from behind the curtain, the audience was taught a simple dance and lyrics for the show’s big musical number. When the song finally came during the third act of the play, the arms and voices of children, parents, grandparents and guardians joined in the performance.

After the show concluded, the cast came back onstage and began a question-and-answer segment. At first, the cast asked questions directed to the youngest members of the audience, encouraging them to reflect back on the morals of the play and their own experiences involving art and responsibility in their day-to-day lives. Afterward, they offered to answer questions from members of the audience about acting, theatre and the arts. It was at this point that several middle and high school–aged kids asked the cast about their experiences as professional actors. Adults, teens and young children in the audience all had ample opportunities to engage with the play, which in my opinion is the high water mark of any all-ages performance.

“The members of the small cast of Pete the Cat were all excellent actors, and each elevated the show to a higher level with their talents.”

You can catch Pete the Cat at the Salt Lake Acting Company until Dec. 30. Tickets can be purchased on the musical’s official site.