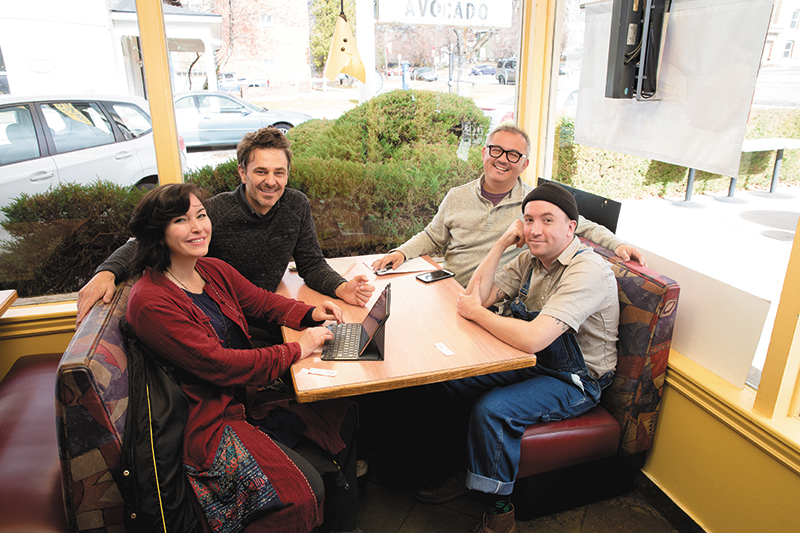 Austin Archer, a Salt Lake native and New York City–based actor, playwright, choreographer and musician, is preparing to present his Plan-B Theatre Company–debut play, JUMP. Archer is one of the recipients of the grant for emerging artists from The David Ross Fetzer Foundation, which has led JUMP to be produced Plan-B Theatre Company. JUMP is a journey grounded in thrill and curiosity. It all begins during a skydive and follows the kinship and grief of four newly connected lives. Taking place post-incident, the play unravels stories of before while moving through the future of discovery and complex interactions.

SLUG: What is your background as a playwright?

Archer: JUMP is my fourth full-length play. Now, I have written six full-length plays … I know it’s not a lot, so I feel very new to it. I started writing plays in high school. None of them were ever very good. Then I took a playwriting course in college that was one of my favorite classes. I loved it so much I took it three times. It made us write. We had to come in every week with a new 10-minute play. This same kind of exquisite pressure (stealing a term from Anne Bogart) reminds me of how I don’t know if I would have written JUMP without the deadline a month and a half away. I was working in Salt Lake as an actor for six or seven years nonstop and I didn’t have time to write. I write music as well, and my music took a break … It wasn’t until I moved to New York that my writing came back because my acting work slowed down a lot, naturally, as I entered a larger market. So I just started writing a lot more. I wrote a couple albums of music, a few plays and I’m writing another right now.

SLUG: How did you start writing JUMP?

Archer: JUMP started in my head as an idea that I was talking to Carleton Bluford about. I initially pitched it to him, asking if he wanted to co-write this with me. Eventually, he came to me and said, “That sounds like a you thing.” I tabled the idea until the grant came about. It started with the idea that I think it would be cool to see a skydive onstage. I think it’s a sort of a backwards way to write a play—to start with an idea of something you’d like to see onstage that’s not very in-depth.

SLUG: How did you become associated with Plan-B Theatre Company?

Archer: I’ve known Plan-B for years. I’ve had friends that have written with them and acted with them. I always wanted to do shows with them as an actor, but [Plan-B Artistic Director] Jerry Rapier, likes to reach out to people he’s interested in working with. I was never able to get in through that avenue, but with their association with the David Ross Fetzer Foundation, which gives this grant away each year to two emerging playwrights to produce two plays. You not only get your play produced, but you also get to be a part of Plan-B’s Playwright’s Lab. It’s a group of local playwrights who are all more experienced and smarter than me, who I get to listen to. We give constructive critiques on what we think could be better. It’s really valuable for writers to get together like that and be able to hear their work, and then get feedback from people who have been doing this for a long time. At least for me, I’m one of the youngest in the room, so it’s a cool thing.

SLUG: Does the storyline of JUMP apply to the story of the Davey Foundation?

Archer: It doesn’t apply to the play, but I did know David Fetzer. I started working at Salt Lake Acting Company as an outside house manager in ’08 or ’09 and he was acting in a play there called Boom. I was enamored by him, but we never got around to working together or hanging out as much as I would have liked. I was pretty heartbroken when he died and it affected the whole, entire theatre community. He was such a bright and inspiring voice. He did so much. He wrote so much. He really kept such a motor running here. I think it is such an amazing tribute to someone like that to set up a foundation like this. This is exactly what David would have wanted, to get money together for other emerging artists.

SLUG: Who’s in the cast and who are some key members of the production team?

Archer: Matt Sincell is playing Erick. He’s quickly becoming one of Salt Lake’s favorite actors, for good reason. Nicki Nixon plays Michelle. She really made the character come to life. She’s a very human actor that’s very honest, very real. Teri Cowan is a powerhouse actor, and she was my first choice for Abby. Darryl Stamp, playing Phil, really brings a level of comedy to the show that it needs so that it’s not so heavy. Alexandra Harbold and Robert Scott Smith with Flying Bobcat are whizzes at doing a lot with little. I’m excited to see the actualization of the set design by Cara Pomeroy. I think the sound design is going to be a big element in this show, too.

SLUG: How does JUMP relate to your work as an artist in general?

Archer: JUMP is probably the most spectacle-ridden show I’ve ever written, in terms of the pace of the show. I think it’s got about 16 scenes in it, which is a lot for a four person show. My two favorite playwrights are Annie Baker and Tony Kushner and I think that I live between them as far as influence goes, between spectacle and naturalism. One of my plays, Marty Has Cancer, is mostly just people relating to each other. But I also wrote a play called Day In Age, and there’s this giant no-eyed monster in all three acts.

JUMP premieres April 5 and runs through April 15 at Plan-B Theatre Company at 138 W. 300 S. Archer points out that “Plan-B is notorious for selling out really early,” he says. “It’s the only company in the country that produces entire seasons by local playwrights.” Tickets are now available at planbtheatre.org. For April 4 preview-night assets, make a $20 donation to Craft Lake City: Go to craftlakecity.com/blog.