00:00 / 15:25
Spotify Stitcher
RSS Feed
Share
Link
Embed
Throughout Play—an evening of dance performance, multimedia installation and license to discover—I found myself wanting to chorus a resounding “Yes!” to all of it: to women in collaboration, to dance, to the intersection of more art forms than one, to open-minded spaces, to inspired interaction. 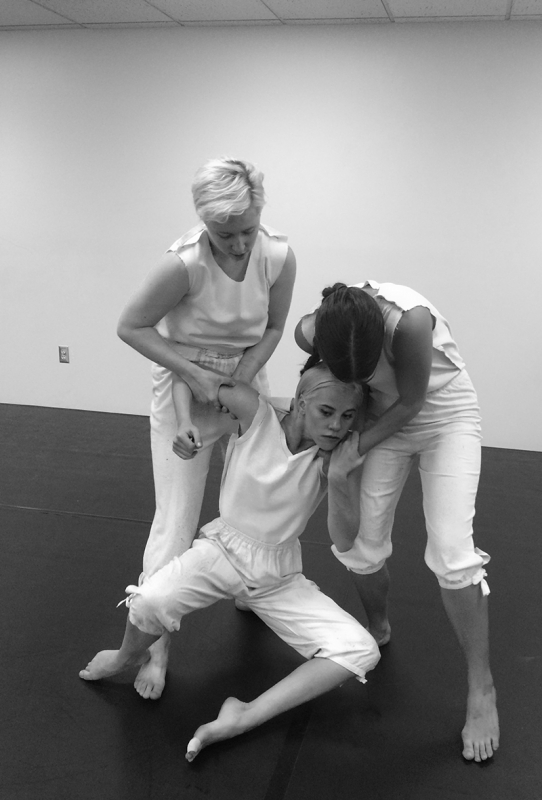 Saxton’s choreography was an advanced, jarring and beautiful exploration of how we become and how we construct identity, recognizing that much of it is reactionary and reflective, but that some of it is chosen, too. Photo: Marissa Mooney Images

Throughout Play—an evening of dance performance, multimedia installation and license to discover—I found myself wanting to chorus a resounding “Yes!” to all of it: to women in collaboration, to dance, to the intersection of more art forms than one, to open-minded spaces, to inspired interaction. The experience was impressively conceptualized by University of Utah seniors Breeanne Saxton, Eliza Tappan and Marissa Mooney, who premiered their choreographies as the culmination of their time with the university’s dance department. Each dancework’s central themes and styles worked together cohesively as a liminal exploration into how we get to where we are now.

When we arrived to Photo Collective Studios, we received one of four programs with varied sets of instructions. My program directed me to give others space, to take it easy, to find myself alone. It prompted me with questions, too: Why are you here? (To write about art and to admire what new things dance can do.) Who is the best person you know? (The person I came here with.) We are asked to interact, to play like we once did.

The Photo Collective’s stylized space housed Saxton’s multimedia installation, “(Y)Our Four Temperaments.” While The Collective offered walls covered with photographs, countless shelves of cameras and an encouraging Ira Glass quote, the installation transformed the space into a playhouse. Stacked board games and small toys littered the rooms. Visitors pieced together messages with scattered Scrabble letters (some verbal artifacts included “TRUE JOY,” “RIOT” and “FIND”). A door read, “Open Me,” so we did. Upstairs, we found rubber snakes on windowsills, tiny Monopoly houses lining the hallway and several mobiles made of found objects or paper cranes.

In the larger studio, several large rectangular panels were strung up on the ceiling, with pink and blue lights in two corners. Three dancers stand barefoot in the center, holding panels up to block themselves from the light and from us, visualizing the divisions we create for ourselves. Saxton thoughtfully prompts, when does it serve to let light pass through you? As we in the audience consider the dancers, who block themselves from the light with their panels—and our own lives, in which we create barriers and divisions—we become a part of the installation as well.

When assistants came to take the panels from the three dancers, Saxton’s “(Y)Our Lines Between Us” began. The three dancers (McKenzie Barkdull, Caroline Eskew, Sarah Stott) wear white and hold one another defensively, absorbing their environment and the audience. They hold each one of us with unwavering eye contact, humming, skirting the perimeter of the room and tracing the space around audience members. As they gain momentum in their movements, their dissonant harmonies converge into a canon of “Row, Row, Row Your Boat.” In the midst of their hums, Barkdull escapes, astonishingly, from the other two after a stunning series of power plays and force. “Life is but a dream,” she cries, repeatedly. Barkdull grips our attention as she writhes—thrives—grasping at her skin, quivering with life. The dancers speak jaggedly: “I am dancer. I am student. I like roses,” they say, breathless. “I know what I am. I know who I am. I know that who I am is what you are.” The dancers walk, staring us down with their hands held in a gun shape—a both accusatory and defensive position—before they sit down in three chairs to assume the audience’s poses. Saxton’s choreography was an advanced, jarring and beautiful exploration of how we become and how we construct identity, recognizing that much of it is reactionary and reflective, but that some of it is chosen, too.

The next number, Marissa Mooney’s “Blueprint for Love,” was held upstairs in a bright, naturally lit studio. I sit down on a pillow with red roses. A large dollhouse rests in the center of the hardwood floor. Mooney, wearing a dainty white dress, places quaint toy houses around the studio with the help of the audience and then thanks us “for being grownups.” As folky music begins to play, Mooney builds herself up into a tantrum, leaping anxiously and picking up the toy houses and throwing them, spinning recklessly and violently shaking her head until her ponytail comes loose. Like any child, though, Mooney grows weary from the tantrum. Slowly, she gently sets the houses side by side. She leans against the brick wall and caresses it, allowing it to support her. She roars out of a window. She leaps into the same jumping motions, but this time, they’re full of joy. Mooney is wild and graceful, moving from the rigidity and discomfort of growing up to a childlike earnestness and ease. At the end, we smile with her. The dance was a charming and poignant glimpse into how it feels to come into our own, the heartfelt sigh of relief when we finally learn how to make a space safe and comfortable.

The final dance of the night, Eliza Tappan’s “Here We Were,” was the most difficult for me to immediately discern. The two dancers, Tori Duhaime and Mackenzie Allred, wear regular clothing, high-top sneakers and large backpacks. They engage in a farce of sorts as they grab each others throats, caress one another, slam and drop the contents of each other’s backpacks against the wall. They whistle, they talk briefly to one another, they launch into frantic monologues, they write with Sharpie. They grab each other’s backpack straps and jump up and down violently, shaking all of the contents of their backpacks out—notebooks, pens, stickers, fake flowers, hair ties, hard candies.

The dance is at times cathartic and at times inscrutable. As we watch Duhaime and Allred’s reactions to the mess they’ve strewed across the floor, the piece borders on performance art. It becomes funny, too—the dancers eat candy, taunt audience members, dress themselves up. They ask themselves, “How do I? How should I? How could I?” When life explodes—like the backpacks did—what do we do with the scattered remnants? We are offered an intimate moment of voyeurism as the dancers passionately and tirelessly try to piece the bits back together.

“Here We Were” stems from an exploration of language: how human beings communicate and the many conventional and unconventional ways we attempt to do so. It’s a study of expression and intention. As the two dancers attempted to communicate with one another, it didn’t matter that we in the audience couldn’t always comprehend what they were saying. Rather, we were offered a chance to watch and appreciate their interactions. After all, art is a means by which to communicate, the willingness to allow some things to be lost so that others might be strongly, strongly understood. That is dance, too. It’s an embodiment and grounding—of presentation and confrontation, viscera and intellect, past and present—through the physical body and its striking capacity to not only express but to connect.