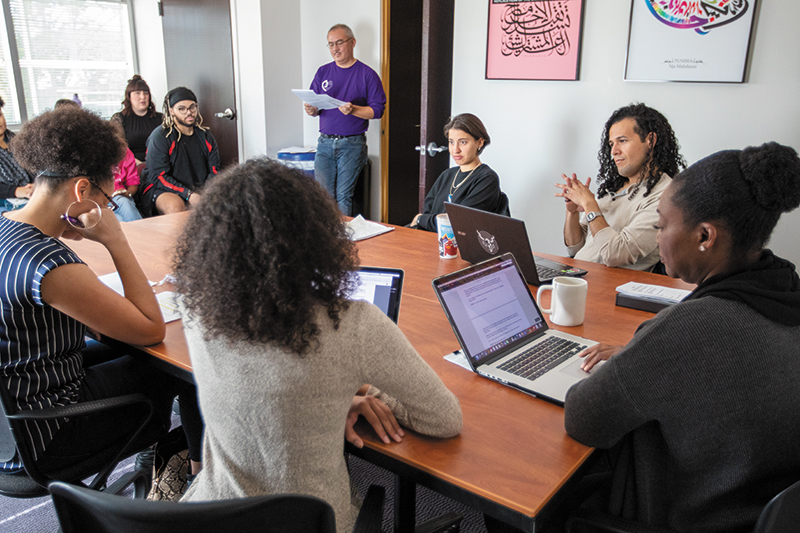 One of the best opportunities a writer can have is to work with peers in a writing workshop. This is especially true for playwrights, whose work must be interpreted by actors before it reaches an audience. Luckily for Utah-based playwrights, Plan-B Theatre Company has come to rely on offering workshops as a source for future productions. This has created a communal relationship not with abstract plays but with playwrights.

Plan-B offers two workshops. One is the Theatre Artists of Color Writing Workshop (TAoCWW), launched in 2017 and composed entirely of new and aspiring playwrights of color. The other is The Lab, created in 2008 and consisting of 11 established playwrights. Though both workshops function similarly to each other, the emphasis of each is slightly different. Because of the experience of its members, The Lab focuses mostly on craft, while the TAoCWW focuses on questions of representation in addition to craft.

“Having feedback from other artists of color, particularly [from] those that have similar experiences to the characters in my play, lets me know that I’m on the right track,” says TAoCWW playwright Tito Livas. “It also makes me really listen to what they have to say because they’re coming from that perspective.” I sat in on a table read of Livas’ in-progress work, American Dreams, which was read by several accomplished and aspiring Utah actors, none of whom had been given prior direction or done a joint rehearsal. This is on purpose, Plan-B Artistic Director Jerry Rapier tells me. Rapier leads the workshops with warmth: “The goal is to see what the play does (and doesn’t) give them as actors, and how it functions completely on its own,” he says.

Tatiana Christian, whose play Suicide Box was also read that day, admits that the process can be nerve-wracking. “I had a hard time watching the actresses read their parts—I was so nervous,” she says. Because both workshops encourage participants to show unfinished work, script readings can be particularly vulnerable—especially in TAoCWW, where each participant is still finding their voice as a playwright. “I really, really loved being in a room full of artists of color,” says Christan, “and it made me really happy to see Black actresses … It really solidified my desire to write plays for and about Black people.”

“The goal is to see what the play does (and doesn’t) give them as actors, and how it functions completely on its own.”

For both Livas’ and Christian’s pieces, the workshop had plenty of advice to offer. Livas’ work inspired opinionated discussion about the challenges of writing nonwhite characters for nonwhite demographics—it was a perfect encapsulation of the TAoCW Workshop’s stated goal of refining craft in conjunction with tackling problems of representation.

For participants in The Lab, the process is no less rewarding despite having an accomplished résumé. Again, the format is the same: private script readings of works at any stage of development followed by internal discussions, which always center the playwright and their goals. “It’s invaluable, really, both as a writer and a student of the theatre,” says Jenifer Nii, whose play Wallace (co-written with other Lab member Debora Threedy) was produced by Plan-B in 2010. Since then, Plan-B has produced a handful of Nii’s plays, including upcoming piece The Audacity, a play about three women from Utah history who share what was, reveal what is and question what might be. “[The Lab has] shown me so many different ways to build and stage a play, and so many creative and innovative approaches to story development—it’s incredibly inspiring and humbling,” says Nii, who had no experience or education back when she joined The Lab in 2008. In many ways, The Lab has been Nii’s school.

“[The Lab has] shown me so many different ways to build and stage a play, and so many creative and innovative approaches to story development—it’s incredibly inspiring and humbling.”

In fact, the workshops often function and feel like an MFA program in their creation of spaces where writers become invested in each other. “I am grateful for deadlines and accountability to other people as I write on top of a full-time job and raising a child,” says Jennifer Kokai, whose play Singing to the Brine Shrimp is being produced by Plan-B for its 2019/20 season.

The company’s upcoming season clearly shows its investment in local talent. Besides producing Kokai’s and Nii’s work, Plan-B also produced The Lab participant Camille Washington’s Oda Might to open the season on Nov. 7. The play explores the dynamic between a doctor, a patient and an orderly; the power dynamic among them; and the way in which this dynamic affects the ability of each to speak their truth. “Oda Might was years old when it was presented to The Lab,” says Washington. “It needed to breathe, to have other people consider it and give their thoughts. There are so many little moments that have been strengthened in the story since then.”

As for the TAoCWW participants, Plan-B is producing several works for its Script-In-Hand Series, which features staged readings of plays-in-progress. This year, Plan-B will also revisit its production of Nii’s play Suffrage, which it initially ran in 2013. In the play, two sister wives navigate Utah’s little-known place in history as the second U.S. territory to give women the vote. This production is a part of Better Days 2020, a local nonprofit dedicated to popularizing Utah women’s history. “I hope we helped expand the conversation in 2013,” says Rapier. “It’s exciting to be part of a much larger conversation in 2020.”

For more information and tickets to any of the shows coming out of these workshops, visit planbtheatre.org.