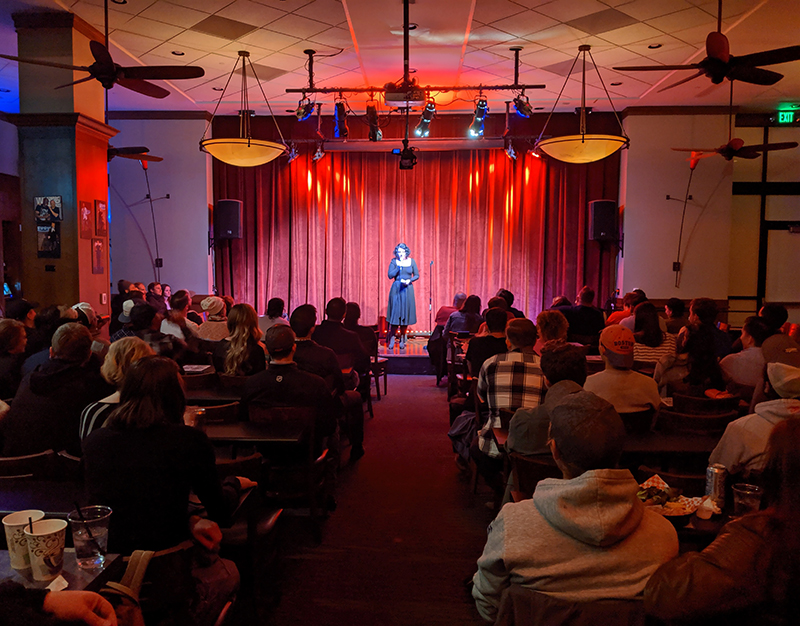 Rachel Rothenberg is a one-of-a-kind personality in the growing Salt Lake comedy scene. A true enigma, she’s a stand-up comedian who likes both fancy frocks and bugs. She dresses like a well-refined lady from a bygone era, and does so while telling poop jokes on stage—she’s unexpected and unforgettable. Rothenberg is also an up-and-coming powerhouse when it comes to producing comedy shows in the valley. Her very own show at Wiseguys Comedy Club, called Dumbbroads, features the funniest ladies in Utah. Her newest female-fronted show, Dumbbroads II, will be hitting the Wiseguys stage on Oct. 20.

A transplant from Connecticut to Utah, Rothenberg is no stranger to being a little bit strange herself. “I was really used to being an outsider there, I was always that way growing up,” she says. “So it doesn’t always feel weird to me to be a weird person in any context. It’s just sort of my default mode.” Rothenberg even willingly seeks out situations in which she would be strange, and comedy is seemingly a perfect fit. “In Utah, the comedy community was actually the first place that I felt like I fit in,” says Rothenberg. “I knew that I stood out as I’m not a guy and I’m not an ex-Mormon who’s been traumatized by the church—but they are kind of my people. I understand them,” she says.

“I was putting sprigs of rosemary in my nostrils while I wrote jokes. Didn’t work.”

After cultivating a lifelong passion for comedy through a love for Mae West and Sarah Silverman, Rothenberg finally took the dive into stand-up in March of 2016. “I spent a really long time overcoming stage fright,” she says. “I straight up blacked out from anxiety—no alcohol, just fear—for the first year and a half that I did it, every time I did it.”

She filmed her sets just to remember the jokes that she would tell because she was completely in the moment. When it comes to her stage jitters and nerves, Rothenberg has tried all of the tricks of the trade and tidbits of advice from other comics. “I tried to use the smell of rosemary to improve my memory, so I could keep track of my jokes. I tried huffing rosemary for awhile. I was putting sprigs of rosemary in my nostrils while I wrote jokes. Didn’t work.”

Rothenberg is a bit different from other comedians, as she’s had no formal background in any performing arts. Her focus is on her writing, of which she says, “I’m a pretty good joke writer.” Upon seeing her on stage, though, “pretty good” feels like an understatement. Rothenberg is clever and quick to find original puns. “I think I have arrived at something,” she says.

Rothenberg discovered her ability to make people laugh while working as a political canvasser during the 2016 elections. It became her way of getting an “in” for a progressive candidate in rural Nevada. “It was going to be a stretch to convert any of them,” she says. The only way she could get people to speak to her while she was “dressed as some city liberal bitch” was by making them laugh so they would invite her in. “The reason that I do stand-up is to be heard,” she says.

“There’s politics in just being a human being with human problems and life choices.”

Her comedy, though, wouldn’t be considered particularly political. “At least for what I’m doing now, the political is often implied,” she says. “There’s a gulf between my sense of humor and my goals for the world.” She describes her comedy as “very juvenile:” “I love poop jokes and sex and silly things to laugh about.” She purposely tries to not get too serious, and just enjoy the fun of being funny. “There’s politics in just being a human being with human problems and life choices. It’s political [in that] that I’m telling that type of joke at all. It’s a political act just being a female in comedy making the same jokes as the boys do.” Her look may be serious, but her misdirect is that once the joke is delivered, it’s clear she was never taking anything too seriously at all.

Rothenberg had noticed that, although women were getting spots at comedy shows around Utah, their comedy presence onstage at Wiseguys was lacking. That’s when she saw an opening for a new type of show and took it. “Let’s just get some goddamn women on this stage, or on any stage there,” she says. “I didn’t understand why it wasn’t already happening and why no one else was doing it.” After all the ruffled feathers, the only pushback she received was exactly what she expected: somebody not understanding the name of the show. “It’s a joke based on the name of Wiseguys. It’s the exact opposite of a ‘wise guy’” Rothenberg explains.

“I genuinely feel that women are pushing the hardest right now of my peers that are doing it.”

The current Utah comedy scene is experiencing a much-needed upswing of shows, open mics and comedy venues. Rothenberg is a huge part of that, as she is making shows to give a platform specifically to amazing local comics. She’s also using her comedy chops to make a space for a growing field of local women in comedy. “The sort of tag line and hashtag we are using for [Dumbbroads] is ‘only women are funny,’ which is a thing I posted to social media a long time ago and people got really mad about it,” she laughs. “I thought it was amazing that it ruffled a lot of feathers and made people really mad that I said it.” In keeping with her desire to uplift local female comics, she feels that these women are the best comics in the scene. “I genuinely feel that women are pushing the hardest right now of my peers that are doing it. The growth of the female comics locally has just been so incredible to watch.”

As far as what the future holds for female comics in Utah, Rothenberg says that “I think we could dominate, to be perfectly honest.” “I also think that the female comics locally are relatively supportive of each other now.” With more and more women getting into comedy—and getting to the top—she’s confident in the growing talent of female comedians. “I think that we are just trying to make each other better,” she says. “Instead of being viewed as a ‘slot filler,’ which is how I’ve felt that women have been treated for a long time in the Salt Lake scene, I would like women to just be who you think of when you think women are funny.” That’s why she only books the best of the best when it comes to showcasing female comedians in Utah, in order to provide a strong show from start to finish. Not to make something that is good in spite of having women on it, but creating something that is just a really great comedy show. Dumbbroads is just that.

Dumbbroads is a recurring show every two months at Wiseguys Comedy Club at the Gateway in Salt Lake City. Dumbbroads II is on Oct. 20 at 7:30 p.m., featuring Natashia Mower, Jordan Harris and Krystal Starr. Tickets can be purchased online or at the door for $5.00.

More on SLUGMag.com:
Abi Harrison: Standup Comedy and Fresh Pineapple
Robbie Brooks – The Far Side of the Mic