The sun was high and the ground muddy. Horses slipped as they attempted to trot through the jousting field. The sprawling grounds on which the Renaissance Faire is located were void of their weekend crowd. The many stages were bare and the only noise came from the multitude of birds and crickets from the surrounding swamp and the sporadic, distant barking of an unknown dog.

Renaissance Faire 2015: A Knight To Remember 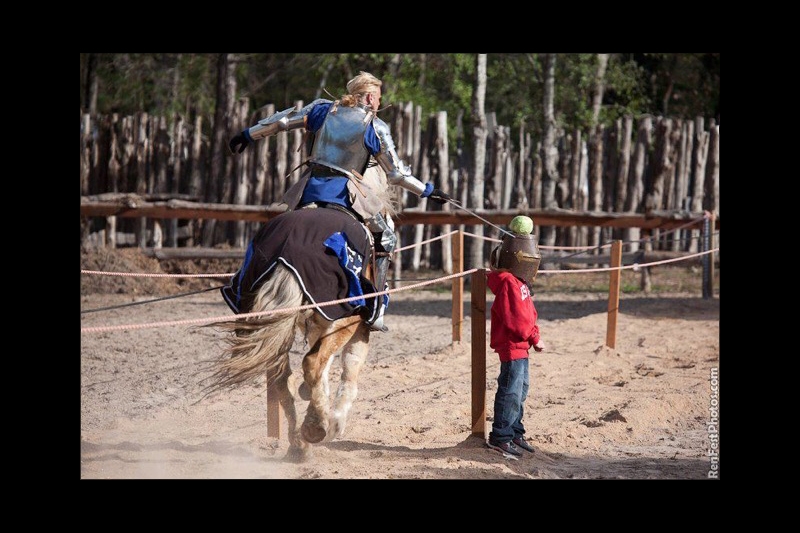 Please don’t try this one at home. Photo: Renfestphotos.com
The sun was high and the ground muddy. Horses slipped as they attempted to trot through the jousting field. The sprawling grounds on which the Renaissance Faire is located were void of their weekend crowd. The many stages were bare and the only noise came from the multitude of birds and crickets from the surrounding swamp and the sporadic, distant barking of an unknown dog.
After leaving the Marines, Dj Coburger found the Renaissance life. He was attracted to the faire because values within modern society didn’t match his beliefs. “Today, its all about ‘He who dies with the most toys, wins,’” says Coburger. “Here, it’s a community. People help each other out and will literally give the shirt off their back.” This community action even takes place with kids. The children are all looked after by the community, as if to exemplify the saying, “It takes a village to raise a child.”
For many people the Renaissance Faire is a way of life. Coburger, who, during the faire, goes by Sir William Pickering, loyal subject to King Henry VIII, explained that the majority of vendors, entertaining acts and jousting troupes travel around the country making a living from working Faires. Vendors sells goods like swords, clothes, armor and food. Performers are just as diverse and range from lesser-known acrobatic acts like The Tortuga Twins to famed “Hollywood”-esque Renaissance ventriloquist Ded Bob. The Jousting troupes are different as well, adopting the Realgestech style, where jousters have no shield but a tic-tac-toe pattern, with raised bars, above the heart—allowing for the lance’s blow to stick. Coburger has jousted many times in the Realgestech form, resulting in many concussions, dislocated shoulders and an inability to fully extend his right arm.
Coburger is currently ranked as the Knight Marshall, “I oversee everything which takes place on the jousting field,” he says, “like a referee.” Coburger was knighted after his first jousting competition, after having been a squire for many years. Like the military, there are ranks within the festival community. The ability to rise in rank pertains to the each individual’s work ethic and knowledge of Medieval and Renaissance customs. “We are always onstage” says Coburger. “Imagine there are one thousand people around you and they’re asking you all sorts of questions. You need to be able to talk to them, all while not breaking character.” This becomes even trickier when in a historical text, because that person needs to not only know about their own lives, but also those of many prominent figures of that time. The rise in rank may be arduous and can take years. Trouble may also arise when apprenticing if the group disbands, because the apprentice must start all over again. However, with it being such a close community, having a good reference is usually not hard to find.
Being a knight is a difficult task to achieve. One must be constantly on top of their game. “During festivals, a knight was judged—not only on their ability to be in combat or how they handled their horse, but also as a person,” says Coburger. “In the dances, a knight was questioned on current events, dances and all other forms of knowledge.” For Coburger, a knight is an all-encompassing figure. This figure upholds the seven knightly virtues of courage, justice, mercy, generosity, faith, nobility and hope. “A knight is someone who does the right thing in all aspects of life, whether being watched or not,” says Coburger. “He is a person who stands up for what is right and the person many look to for guidance.”
This understanding of knighthood led Coburger and other to create the non-profit Intermountain Renaissance Arts Foundation. “We are trying to educate children on science, art and Renaissance history through interactive teaching,” says Coburger. “We realized that kids were much more receptive to characters who they say on TV, rather than just some person talking to them.” The foundation is currently working to combat bullying in schools with the help of Jack Sparrow, Captain Hook, Elsa, Captain Barbossa, knights and other figures.
The Renaissance Faire and Fantasy festival is going on during the first four weeks of May. The faire grounds are big and there is a lot for a family to do—from knightly competitions and belly dancers to bards and purchasable chainmail. There is also a discount on tickets for those in costume. Proceeds go to the Intermountain Renaissance Arts foundation and local animal rescue Pack N’ Pounce. The Renaissance Faire is located off of exit 346 in Ogden. Check out more information about the Utah Renaissance Festival and Fantasy Faire, Pack N’ Pounce and the Intermountain Renaissance Arts Foundation.
Photos: