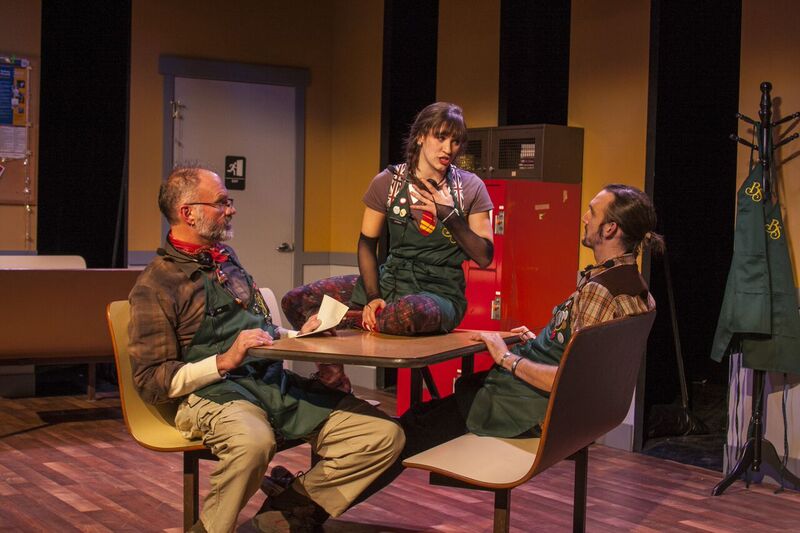 ooksmart, written by the clever Rob Tennant, takes place in the small backroom of a chain bookstore, Booksmart, during the Christmas season. Photo: Rick Pollock

Let’s be honest: Working retail during the holidays fucking sucks. Customers suddenly take on the role of soul-sucking urchins while underpaid retail workers’ only defense are bigger smiles, unjustified apologies and maybe a 10-percent-off coupon for those special kinds of assholes. Yes, Christmas, the season of cheap iconographic materialism and the time of giving—giving no fucks, that is.

I can’t think of a better way to end your workday or weekend of retail hell other than seeing Plan-B Theatre Company’s Booksmart directed (with much dark humor) by Jerry Rapier. Booksmart, written by the clever Rob Tennant, takes place in the small backroom of a chain bookstore, Booksmart, during the Christmas season. We follow Casey (played by Tyson Baker) and his four coworkers’ struggle through a typical day in retail: angry customers, dealing with the stressors of non-work life and the belittling effect that working a minimum wage job has when you have a B.A. (or even a Master’s) degree. Unpleasant as this sounds, the backroom of the Booksmart store is incredibly hilarious! Casey decides he is going to go on strike. He insists he could easily put up with customers’ crap “for a living wage,” but the only way to receive a living wage in this day and age is by crossing the “mythical full-time threshold.” And even then, most people are still just scraping by. Casey plans on leading a strike by refusing to work when he is on the clock. His coworker and love interest, Alex (played by Sarah Danielle Young), believes that Casey is going about the strike all wrong. She reminds him of past revolts and protests regarding workers’ pay: “Those workers fought! Fighting is an active word!” Alex reminds us that our generation is very quick to demand more but very reluctant to fight for their demands.

Meanwhile, the other coworkers are doing their best to help the most obnoxious customers. Ed, Ruth, and Cindy (played by Joe Crnich, April Fossen and Anne Louise Brings, respectively) are pushed to their limits by hot-headed, ruthless customers. Between the Mary Jane–clouded Ed being told the true history of Christmas, Ruth calling out customers for being complete assholes and Cindy losing her mind trying to find a puppy-dog picture book for “the next president in training,” the audience was roaring with laughter. At one point, Ruth mentions that this “joyous season of ‘giving’ will destroy me.”

The designers of the show also had me laughing for various reasons. Before the show even began, Christmas music rang throughout the stage. At first, I thought I was going a little crazy, but I soon realized that, yes, I was hearing variation after variation of “Rudolf the Red-Nosed Reindeer” on repeat. I commend sound designer Cheryl Ann Cluff for having found a disco version of “Rudolph.” Well done. Costume Designer Aaron Swenson didn’t hesitate to embroider large “BS” symbols on the front of the retail workers’ aprons, obviously standing for “Booksmart” but alluding to “Bullshit.” Also brilliant. One of the best scenes takes place inside Casey’s dream in the backroom. Lighting designer Jesse Portillo dims the lights to give the impression of a sexy-mood while unfolding one hilarious fail of a wet dream onstage.

I could see the years of my retail experience displayed onstage in one form or another, making the show even more comedic. Tennant did a great job in writing these characters as truly booksmart—whether it’s in philosophy, sociology, history, English literature or pop culture—and I hurt for them, knowing that they are stuck in a dumpy chain bookstore with so much potential to offer themselves in other career fields. At one point, Casey asks Alex, “How many majors did you have?” She responds, “More than two and less than 10.” Can I get an amen from every college student I know?

Even with all its humor, Booksmart touches on some pretty important problems within our consumerist society. The mentality we have that the customer is always right is—as Ruth says—a “sacrosanct fetish.” The social commentary about religion during this season is downright, painfully true—and quite funny. Ed mentions that the Bibles are “through the fiction aisle and towards the toilets.” The entirety of the play gives audience members a few interesting—and smart—ways to start a revolt of our own. The play is about more than shitty retail work: It’s about education, the unbalanced class systems in our country and, more than anything, this play is about community and union.

Booksmart is only here for two weeks and is selling out fast! Grab your tickets at the Rose Wagner Performing Arts Center ASAP and check out the rest of Plan-B Theatre Company’s lineup for this year. This is a dedicated group of designers, producers and performers that will give you a show to remember.