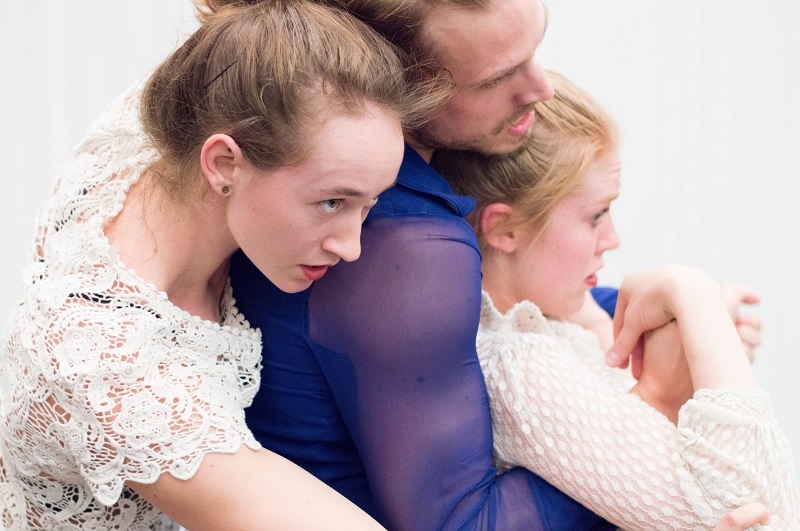 (L–R) Breeanne Saxton, Florian Alberge and Marissa Mooney performing in the piece "This Is Your Paradise" Photo: Kylie Lloyd

[caption id="" align="aligncenter" width="800"] (L–R) Breeanne Saxton, Florian Alberge and Marissa Mooney performing in the piece "This Is Your Paradise" Photo: Kylie Lloyd[/caption]
If a Snake Should Bite was the second dance show that I’ve seen at the Ladies Literary Club, and I’d wager that it is the most impeccable site for a modern dance experience in Salt Lake City. The space lends itself well to warm lighting, and the sound system is top notch. What’s more, the floor is just as suitable to dance on, which re-designates the actual proscenium as another plane that may or may not be used. If a Snake Should Bite was curated quite well—choreographer Molly Heller and emcee Brad Heller, co-owners of Tea Grotto, saw to it that high-quality teas and cookies were available for attendees. The crowd was friendly, salutatory and eager to witness the impending work. The first piece, choreographed by Sara Parker, entitled “Better an ignis fatuus/Than no illume at all,” was visually reminiscent of a mixture of The Craft and The Virgin Suicides. Candles adorned the stage and sides of the performance space on the floor. Dancers Caroline Eskew, Sarah Stott and Parker engaged in movement with each other that brought witchcraft and ritual to mind (in large part because of the candles), but it was tempered by Parker’s costuming: They wore light-colored jumpers that recalled pajamas. It’s a synergistic dance, and their violent cavorting gave the piece some nice edge. More than anything, it’s a pretty dance—it’s not transgressive or groundbreaking, but it doesn’t need to be. I found it fitting that Katherine Adler was the lighting tech, because “Better an ignis fatuus/Than no illume at all” reminded me of some of her dance-making. “Splits,” a duet performed by Molly and co-choreographer Netta Yerushalmy, evinced the progression of Molly’s dancing/choreography. I confess that I am not familiar with Yerushalmy’s work, but she executed a (good) rigid awkwardness that I’ve seen Molly work with before. The vocabulary screams, “tense,” silently. The beauty of Splits is that it is transgressive without text, lewdness or gimmicks. It was successful in the discomfort it exuded, and the use of the small bottom doors of the proscenium lent the piece a sense of dimension and mystique. Molly’s piece “This is your Paradise” was a magical closer. Dancer Marissa Mooney walked in a circle on the floor with a plastic smile that brought another element to Molly’s use of facial expression in creating dances. Florian Alberge and Breeanne Saxton entered on the stage and danced together until the three became entwined in a grapple akin to a breathing collar-and-elbow tie-up between three professional wrestlers. Puppeteer Gretchen Reynolds walked around an eerie marionette near the beginning and closed with the spotlight on him. I would have liked to see more of Reynolds and the puppet, as their presence was fleeting; I would have also liked to have seen Reynolds costumed. The initial three dancers wore white-and-blue, vintage Americana getups that worked well with the music selection from Joan Baez, Marshall Tucker Band, Laura Veirs and Neil Young. Before the final puppet scene, Natalie Border, Michael Crotty, Tim Hurrison, Wen-Hsin Liu, Katie Meehan, Allison Shir and Wenting Sun came to the floor one by one in a sort of backup-dancing move à la old Britney Spears videos. The transition of them coming onstage proved to be cumbersome, but it worked when everyone was there. Ultimately, this dance explored Molly’s motifs and vocabulary par excellence. “This is your Paradise” invokes the jarring chemistry of Nan Goldin or Cindy Sherman photos and makes them move. Utah needs more dance like this.
Photos: